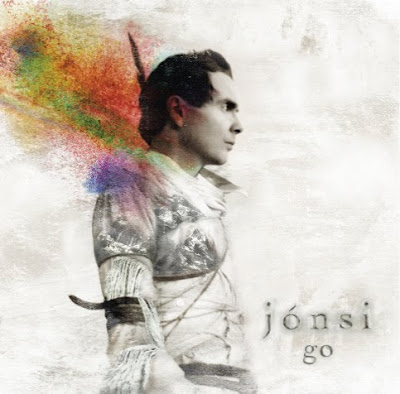 The first time I heard the Icelandic band Sigur Ros was in January of 2002. I was browsing in a store when a song began to play. It was a haunting, slow, otherworldly sound; a spacey lullaby. The singer’s voice was soft, high, and sounded neither male nor female. I was paralyzed by this sound that seemed to be coming from somewhere beyond this dimension. It actually shook me up pretty good—I was overcome with emotion. Once I calmed down, I asked a store employee what we were listening to and was told the name of the band and the title of the disc, “Agaetis Byrjun” (“A Pretty Good Beginning”). I went directly to the CD store and got a copy.

The song I heard is “Svefn-g-englar” which, in Icelandic, means “Sleepwalkers.” The literal translation of the title is quite touching: in Icelandic, the idiom for one who sleepwalks is a “sleep angel.” In the chorus of the song, lead singer Jón Þór (that's "Thor" for those who do not speak Icelandic) Birgisson repeats a word, “tju” (“tyoo"). When I was searching for a translation from the Icelandic, there was no equivalent for the word “tju,” so I searched on-line and discovered that the word is not really a word, but a sound that Icelanders make to comfort babies.
Wow.

That was my introduction to the music of Sigur Ros ("Victory Rose" in Icelandic). I now own their catalogue and firmly believe that if The Universal Consciousness had a house band, it would be Sigur Ros; their music is calming, moving at a dirge-like pace, full of plaintive cries, low rumblings and echoes implying emptiness and infinite space, and Birgisson’s angelic vocals tremble with genuine emotion throughout. I have read many accounts of people who report the same experience I had: being overcome with emotion, and/or an outpouring of tears upon first exposure. Their music is an expanding experience, enigmatic, overwhelming, and transcendent. This makes me think of the archetype of Kuan-Yin, the Chinese mother of the cosmos, who does not cycle off to Nirvana, but instead, stays behind in this realm to comfort those suffering and in pain—or in Buddhism, Bodhisattvas, who do the same thing. I am connected to a universal well of endless tears and love in the music of Sigur Ros. It is the sound of ultimate cosmic empathy, sympathy, agape, and a deep compassion beyond this world.

Another aspect of their sound is that of pure joy or a “peak experience” as they say in psychology. Some of the uptempo songs vibrate with ecstasy and profound delight. It is precisely this sound that Jón Birgisson, now dubbed Jónsi, brings to his glorious first solo release, “Go.” For example, in a frenzied, thrilling swirl of energy, full of rapture and exhilaration, he sings in a song called "Animal Arithmetic":
"Wake up, comb my hair
Making food disappear
Riding bikes, making out
Elephants run you down,
You and I run away, blushing cheeks
Howling wolves, colorful fireworks,
Everytime, everyone, everything’s full of life
Everyday, everywhere, people are so alive"

All the songs are lovely, soaring and joyful. Below is a video for the first track, the highly energetic “Go Do,” in which he sings:
"Go sing, too loud
Make your voice break - Sing it out
Go scream, do shout
Make an earthquake..."