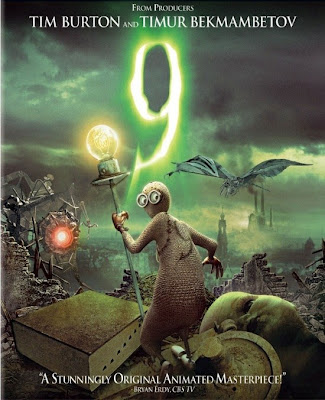 This animated feature produced by Tim Burton follows a group of nine burlap rag dolls in a post-apocalyptic retro future. A war between AI (artificial intelligence) machines and mankind results in the destruction of every living thing on earth. During this war and shortly before the human race and indeed all life is destroyed, a scientist discovers a way to create life—or rather to impart pieces of his own life force into a set of rag dolls made of burlap and found objects. He wants life to continue. “We had such potential. Such promise. But we squandered our gifts. And so, 9, I am creating you. Our world is ending. Life must go on,” he says.

The look of the film is surely Burton-esque, and the animation is quite nice with a lot of lovely detail, along the lines of Pixar’s delightful and touching “Wall-E,” but despite the sweet earnestness of the little dolls, the story seemed a tad derivative. The war between man and machine reminded me of the premise of “The Matrix” series. Some of the machines in “9” even resemble the attack machines that characters in “The Matrix” called Squiddies. Setting the war in a sort of alternate past-future was a nice touch too, but that seemed to come from something else as well. World War I tanks and World War II planes battling deadly futuristic machines seems like the sort of mash-up that we saw in “Watchmen.”
Still the story was entertaining enough but lacked sufficient content to feel like an actual story. With a running time of seventy-nine minutes, it flies by, feeling more like a short film, promising more to come when it is fully fleshed out.

Recommend? Um…I guess so…if nothing else in your Netflix queue.
Posted by Jeff at 6:46 PM