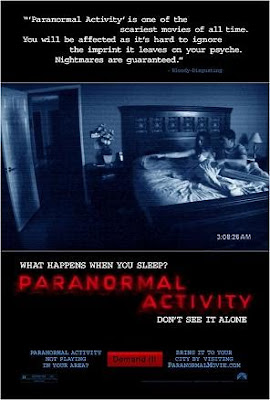 Comparisons to “The Blair Witch Project” are inevitable when you make a cinéma vérité horror film using handheld techniques—and when the camera is held by the actors in the film. First-time director Oren Peli made “Paranormal Activity” in his own home for a mere $15,000 and it turned into a runaway hit.

With only four actors, Peli creates a tense tale about a young couple, Katie and Micah, terrorized in their San Diego tract home at night while they sleep by some kind of very powerful supernatural force. With few actual special effects, Peli mostly uses mood and a few well placed bangs and thuds to instill fear, along with bizarre, unexplained happenings like a long ago lost photo of Katie as a child showing up in their attic crawlspace. And just like “The Blair Witch Project,” the happenings compile themselves until there is no escape from what is about to occur.

The down side is that the film is not too original, with echoes of “The Blair Witch Project” and “The Exorcist” among many others. We’ve seen this all before, and frankly the whole “demon” thing doesn’t really work on me. There’s no such thing as “demons” since human beings can be plenty scary enough. But having said that, I cannot deny the chilling effect and goose bumps I had while watching. There is something very primal and basic about sleep and how powerless and vulnerable we are during the night.

Recommend? Yeah, go ahead… but don’t watch it alone at night. You’ll feel better with a companion to share the chills with…
Posted by Jeff at 11:00 PM