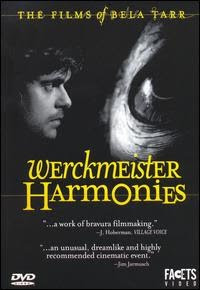 Hungarian filmmaker Béla Tarr made “Werckmeister Harmonies” in 2000, but it has a haunting, timeless feel to it. Shot entirely in textured black and white in winter, it opens with our hero and narrator, a young man named János (played by Lars Rudolph), placing drunk pub patrons in the position of the sun, the earth and the moon to act out an eclipse. The small village on the Hungarian plains that serves as the backdrop looks like the twentieth century has barely touched it—the sad, squalid pub is lit by a few glaring fluorescent strips, hot water tanks are heated by burning wood beneath them, and there is nary an automobile to be seen.

The film is moody, pensive, quiet, and tenebrous. Helping the mood along is Tarr’s visionary and amazing long takes. Indeed, there are only thirty-nine scenes in this two and a half hour film with most scenes stretching up to eleven minutes of continuous shooting. These shots clearly required intense choreography and rehearsal since the camera, like the drunk earth and moon in the opening shot, seems to orbit the actors, circling them, coming in for a close up, then pulling back out for a long shot, gliding through doorways, settling on someone or something, only to float away, out another door or window. The resulting slow-motion dance is breathtaking—and what Orson Welles tried to do in his infamous opening sequence of “A Touch Of Evil.” Tarr makes the camera, and by extension the viewer into a sort of gentle, omnipresent sleepwalker.

The story has some odd touches to it as well: a side show attraction of the carcass of a giant whale comes to town along with a mysterious foreigner who calls himself The Prince. We learn through other characters that The Prince goes from village to village giving speeches that contain atheist content which riles up the townsfolk. The way the whale is presented and how the poor creature ends up felt like a page from Magic Realism, in either literature or cinematic form.

Throughout the film, the villagers have been either absent or standing around, stock still, doing nothing yet we are told that there is crime and great danger in town, we are told that there is unrest and anger brewing. But there is apparently no reason for it. The villagers, out of boredom or ignorance, and goaded on by a drunk police chief and his power-hungry mistress, finally reach their boiling point; and János describes the attitude of the marauding crowd with this crucial line: “We didn’t find the real object of our abhorrence and despair, so we rushed at everything we came across with wilder and wilder fury.” It makes me think of what is happening in United States now, and how afraid I am of marauding crowds of ignorant "patriots" who are furious at nothing, trying to find a target and outlet for their mysterious rage.

Recommend? If you only love summer blockbusters, action films, or comedy films such as “The 40 Year Old Virgin,” then this film is NOT for you. All others, yes, by all means, see it…