I discovered another previously unknown-to-me painter while in Italy this past week. Rosso Fiorentino (whose real name was Giovanni Battista di Jacopo, but was nicknamed "The Red Florentine" because of his red hair) lived from 1494 to 1540, and was a painter of the Florentine School. But upon seeing the works of Michelangelo and Raphael after moving to Rome in 1523, he realigned his artistic style. It is remarkable that in his short life of 46 years, his best work was produced only in the last 17.

In the Tuscan town of Volterra is the Pinacoteca Communale di Volterra. This museum is the home of Fiorentino's masterpiece "The Deposition From The Cross." Initially, I was excited to be in the museum to see Luca Signorelli's paintings, since I had just read Frances Mayes' latest book in which she outlines a Signorelli trail with a stop at the Volterra Museum. But I found Signorelli's "Madonna and Child with Saints" in a dark room with only one other piece: Fiorentino's "Deposition From The Cross." These two were clearly and purposefully placed together in a space to fight it out, as it were, and I must say that, for me, the Fiorentino won hands down.

The Signorelli had all the hallmarks of Renaissance painting: the conventional composition, the stiff and formal positions of the subjects, and a static sense of tableau. But the Fiorentino, by contrast, is kinetic, full of life and movement. It is shocking how he rendered faces and clothing; far ahead of his time, he used an angular, nearly Cubist sensibility especially in the face of the woman on the bottom far left supporting the Virgin, in the dress of Magdalene who can be seen at the foot of the cross throwing herself at the Virgin's feet, and in the folds of the cloak of St. John at the far right, turning away, his face buried in his hands. Fiorentino forces our eye to follow an ovoid path around the T-shaped cross from the visceral, sinking grief of the mourners on the bottom of the canvas, up the ladder on either side (an ingenious device for not only our eyes to travel up or down the sides, but for his subjects to travel up and down), to the rushed, hurried nervous energy of the men removing the dead, green, and seemingly ecstatic Christ from the torture device... and down again. The composition is vital, engaging. Fiorentino managed to place a lot within the frame without cluttering the scene. And the result is really something that looks as if it were painted in the twentieth century. This piece is considered by scholars to be a watershed moment in the history of art, directly leading to the development of modern Italian painting. 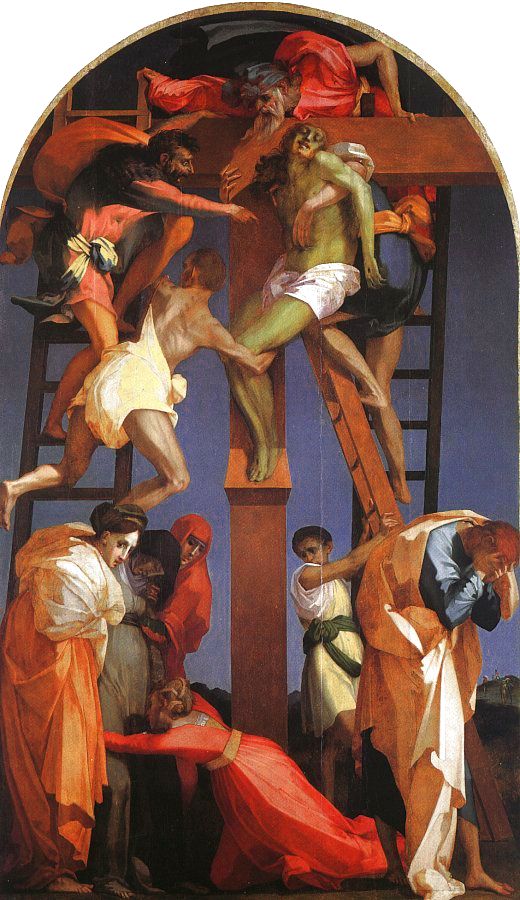