...the third installation in the NARNIA series, "The Chronicles of Narnia: The Voyage of the Dawn Treader," in an effort to keep up on the ever-growing Netflix queue. 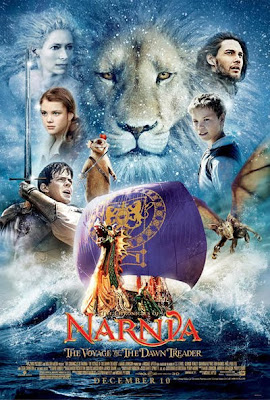 I quite liked the first NARNIA film, “The Chronicles of Narnia: The Lion, the Witch and the Wardrobe.” Based on the books by C.S. Lewis, it was enchanting, entertaining and very well done. There were some wonderful ground-breaking special effects (the legs of the faun Mr. Tumnes!) and it featured the lovely, amazingly talented, and in this case quite icy, Tilda Swinton as the Ice Queen.

The second installation in the series, “The Chronicles of Narnia: Prince Caspian,” was definitely not as cohesive. Even though the original cast of children returned, it felt fuzzy and frankly, a little rushed and cheap.

And now we have the third NARNIA film, “The Chronicles of Narnia: The Voyage of the Dawn Treader.” Oh dear. Where to begin?

Well, firstly, the production by Walden Media was supervised by a different company. Walt Disney Pictures oversaw the first two installments but after a dispute over finances, Walden shopped it to 20th Century Fox. Secondly, it feels as if the vision and energy that started with the first film has been completely abandoned. Where the first film, and to an extent the second, was entertaining for children as well as adults, this third episode feels like it is solely for children. Any subtlety or pretext at creating a plot that hangs together is lost. The film concerns itself with a sort of silly, infantile story line about some kind of green fog that is, um, evil incarnate I guess (?), which takes people and… well, it just takes them. For what purpose? Who knows. What does it do with them? Don’t ask. Even when they are rescued at the end (of course the Pevensie children save the day), they are just sitting there in fog.

C.S Lewis was a late-in-life convert to Christianity and his books have been seen by many as a thinly veiled metaphor for that religion. Lewis himself maintained that the series was not allegorical of Christianity. He conceived of the story before his conversion and included Greek, Roman, British and Irish mythology. But Lewis has also been quoted as saying that the character of Aslan the talking lion is the form Jesus might take in an alternate, fantasy world. Despite this, the first film in the series hardly felt proselytizing; it was easy to get lost in the fantasy aspect of it all. But unfortunately for the third film, that went out the window with the quality. “The Voyage of the Dawn Treader” has some heavy-handed, ridiculous Christian nonsense that seemed exaggerated and shoe-horned into an otherwise forgettable children’s film. That's offensive.