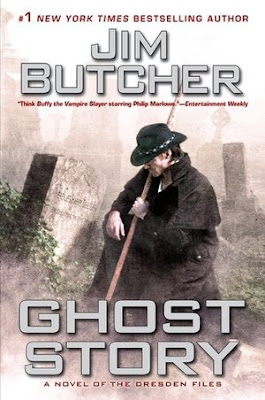 This is the thirteenth installment in Jim Butcher’s “Harry Dresden” series and surprisingly, the characters seem as fresh and interesting as the early books. This is thanks to Butcher’s willingness to make huge, sweeping changes to the narrative of the series—anything can and will happen, and no character is above being killed off, including our narrator and hero, Harry Dresden himself!

At the end of—and I mean the very last page of—the last Dresden novel, CHANGES, Harry was shot in the back by an unknown—to him as well as us—assailant. Butcher insisted that the book was not a cliffhanger. Harry got shot and died. Well, here we are picking up with Harry in the “hereafter”—which actually looks a lot like his home town of Chicago. Harry is a ghost, or in the parlance of the supernatural world in which Dresden lives, a “shade.” His spirit is sent back to the real Chicago to find out who killed him, and to right that imbalance. Easier said than done when he can’t touch or influence anything and no one can see or hear him. His first visit is to Morty, a medium Harry knew when he was alive. He always assumed that Morty was a borderline fake, but lo and behold, Morty can see and hear Harry just fine!

Harry eventually finds his other group of friends (comprised of loyal and returning characters including Karrin, and his apprentice Molly) and discovers that instead of being gone for an hour or so, he has been “dead” for six months. And he sees firsthand the emotional, psychic, and physical toll his death has had on his friends.

Of course Harry is a detective, and no detective story can ever be straight-forward, especially when the supernatural is concerned. Perhaps there is more to this “right-an-imbalance” than meets the eye. Perhaps Harry can only see the tip of an iceberg. Perhaps Harry must find out the truth about his death, his fate, and the lives of his friends.

I won’t give you any spoilers, so you can have the pleasure of discovering the story for yourself, but I will say however, that the book has a satisfying ending, and yes, there will be plenty of “Dresden File” books in the future… featuring Harry himself.

Recommend? Yup. But just like anything in a series, you must read the others first. None of the “Dresden Files” books are stand-alone affairs. The series is a continuing unfolding of events and you need to be up to speed. It makes no sense to come in without any prior knowledge.