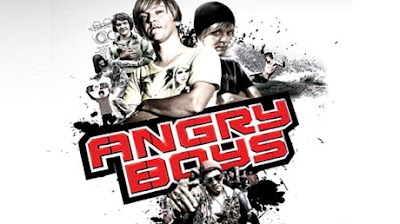 After 2008's “Summer Heights High” series on HBO, Australian actor and master of the mockumentary genre Lilley returns with “Angry Boys,” another vehicle designed to showcase the versatile talent of its creator. Lilley is invested in his characters, no matter how silly or outrageous they may seem. He treats them as individuals, with respect, while still managing to show their follies as well as cultural conceptions. It is no small feat to be able to write and portray a fully-realized persona while being able to poke fun at that persona.

In “Summer Heights High,” a mockumentary series about life in a high school in Australia, Lilley portrayed a seventeen year old girl, a 13 year old Aboriginal boy, and an adult high school Drama teacher. For “Angry Boys,” Lilley is playing a 28 year old black rapper, a 65 year old post-menopausal juvenile detention guard, a passive-aggressive Japanese mother of three, a 38 year old ex-surfing star who lost his testicles in an accident, and has resurrected two characters from one of his early Australian series, identical teenage twins Nathan and Daniel.

Lilley’s “comedy,” like all good classic comedy, walks that fine line between humor and pathos. There is certainly a lot of sadness in the lives of Lilley’s characters but such is life. We watch them carry valiantly on, in spite of their troubles and ill-conceived plans… and we laugh along the way.

The series premiered this past January 1st on HBO. It’s not too late to catch up.

Recommend? Absolutely. And “Summer Heights High” is now available on DVD for viewing as well.