Rick Owens took a turn with his '14 Spring-Summer collection at Paris Fashion Week. Called "Vicious," models stomped around while the Estonian thrash-metal punk band Winny Puhh played in, um... compromising positions: the lead screamer got to stand but the instrumentalists in wolf masks were hung upside down by their feet. And the two drummers were bolted onto a vertical spinning platform (watch the video)!

The black and white clothing was just as furious as well, while retaining the Rick Owens asceticism. He has left behind the ecclesiastical robes and futuristic tunics of the past many seasons for a sense of savagery, of slashed and torn garments, yet still seen through the Owens minimalist lens. Tim Blanks of Style.com reports that Owens was inspired by his early punk days in Los Angeles: Owens said he wanted a "cheerful viciousness, viciousness with humor. I felt like doing something ludicrous and fun." Laser cut materials and sheer mesh dominated. Highlights include a great fringed belt, and forward-looking buckled Pilgrim shoes and boots.

No matter what he does, Owens is never boring. 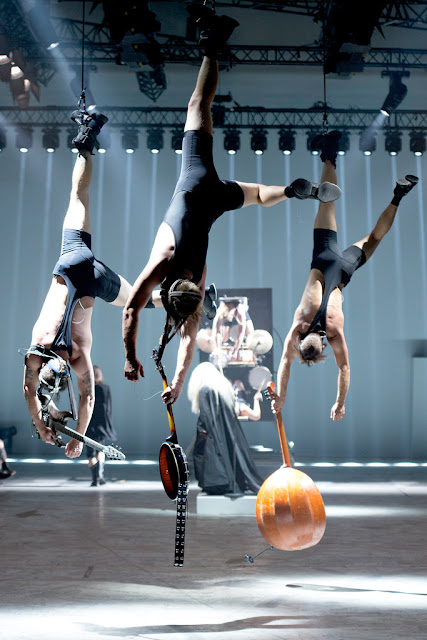