...one of the most classic film noirs of all time, "Double Indemnity" with Fred MacMurray and Barbara Stanwyck. 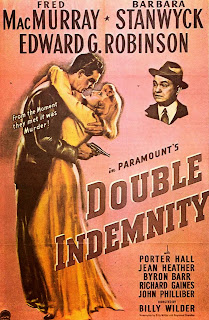 I saw this legendary piece of cinema when I was in film school in college, many, many...many years ago, and while it may take place in a time where there were no cell phones and no internet, it still deals with issues that are timeless like love, lust, jealousy, betrayal, and hatred. This film and perhaps "The Big Sleep" and "The Maltese Falcon" are considered the quintessential film noirs.

Walter Neff played by Fred MacMurray (looking surprisingly handsome and sexy for those who are old enough to remember him as the kindly middle-aged father from the television show "My Three Sons") is an insurance agent who falls for Phyllis Dietrichson played by Barbara Stanwyck. The only thing standing in the way is Dietrichson's husband whom she professes to despise. A murder plot and insurance scam is cooked up and the wheels are set in motion. Classic film noir premise. But the quick banter (seems all the main characters at some point get to crack wise with at least a golden line or two) and smokey atmosphere never seem to get old. And of course, as I mentioned in my recent review of 2011's "Drive" with Ryan Gosling (seen here), the city of Los Angeles is the true uncredited star of the film...just like "The Big Sleep." The city is a silent player, changing and shaping the other characters, effecting how they behave and think, its topography and architecture as important as any living person

The film was adapted for the screen by director Billy Wilder and Raymond Chandler from a novella by James M. Cain. Ya can't get more noir than that. In 1992, the film was chosen for preservation in the prestigious National Film Registry in the the U.S. Library of Congress.
"Double Indemnity" is also featured on the AFI "100 Best American Films of the 20th Century" list and occupies a spot in their Catalog of Feature Films.
http://www.afi.com/members/catalog/DetailView.aspx?s=&Movie=2201