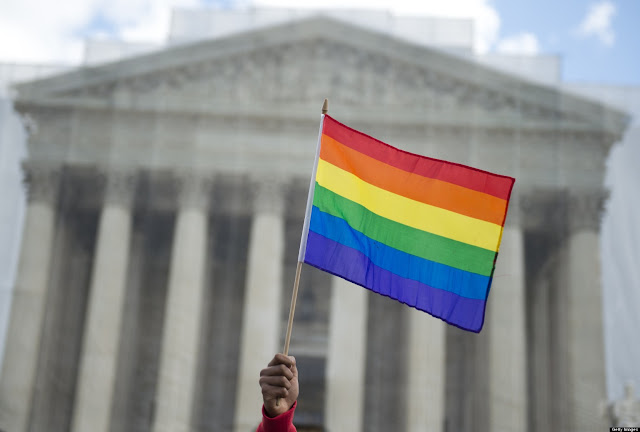 It is a wonderful day for freedom, equality, and human rights today in the United States. The Supreme Court--well, at least the five sane members of the Court--believe that marriage is about two people who love each other, and that such a union between those two people should be legally recognized and sanctioned, NO MATTER WHO THEY MIGHT BE. That recognition is not something that only goes to some couples and not to others; that is not how we do things in the United States. If some people get to marry, then all people may be married. That is how we do it.

The closing paragraph from Justice Anthony Kennedy's statement says it all:

"No union is more profound than marriage, for it embodies the highest ideals of love, fidelity, devotion, sacrifice, and family. In forming a marital union, two people become something greater than once they were. As some of the petitioners in these cases demonstrate, marriage embodies a love that may endure even past death. It would misunderstand these men and women to say they disrespect the idea of marriage. Their plea is that they do respect it, respect it so deeply that they seek to find its fulfillment for themselves. Their hope is not to be condemned to live in loneliness, excluded from one of civilization’s oldest institutions. They ask for equal dignity in the eyes of the law. The Constitution grants them that right.

The judgment of the Court of Appeals for the Sixth Circuit is reversed.

It is so ordered." 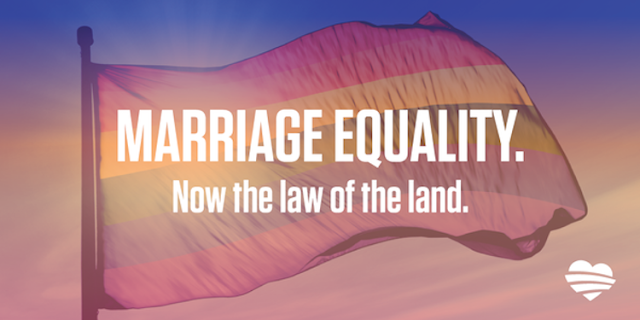 We can and should celebrate today, but there is still a lot of work to be done. Job discrimination and housing discrimination issues are next: shockingly, you can be fired from your job for being gay in THIRTY TWO STATES. That means that in two thirds of the country, you can be fired for no actual reason other than who you love, and you will be unable to do anything about it. And currently only 22 states including the District of Columbia have laws prohibiting housing discrimination based on sexual orientation, which means that, in TWENTY NINE STATES one can be evicted from an apartment or denied a home for no actual reason other than who one loves. And please don't think this is only rhetorical or theoretical as gay men and women are routinely fired from jobs and denied housing. Still. Yes, today is a good day. But let's keep going...
Posted by Jeff at 10:47 AM