Norwood Viviano has created "Global Cities," a conceptually complex art installation that has to do with charting the alarming population growth of humanity around the world over the course of history. In order to illustrate this idea, he has used blown glass pendants. The bottom tip of each one represents when the population of a given area was non-existent or quite small. As our eyes move up the pendant, the shape expands outward expressing the growth in the area. Sometimes the shape shrinks in and expands back out...sometimes more than once (prompting one to wonder about such things as plagues, famines, and shifting economies). But they nearly uniformly end up ballooned out so the resulting object somewhat resembles a spinning top.

The glass pendants themselves are beautiful art objects color coded for the purpose of this project: the oldest cities are rendered in black, the next oldest are purple, and the newest are blue (Viviano measured the age of each city based on the point at which each was given the name under which it’s generally, presently known). Notice in the installation photos below that each piece is hung over its corresponding region or city on a map of the globe. The level top of all glass pieces are hung at the same height indicating the present day (level since this is where the "graph" ends). With this vertical time line, one can see that some areas have had a human presence from quite early on in history: some of the bottom stalactites are very long and thin indicating that the population of that area stayed sparse for centuries. But some areas don't get started until much later and so have short tails. The oldest urban center is identified as Rome and has the tallest silhouette, while the youngest, and shortest, belongs to Shenzen, China.

It's a fascinating three dimensional abstract expression of our migration and existence, and a visual representation of the instability of such a population model. It's no accident that the population of each city is made of glass, a material that can shatter and break... 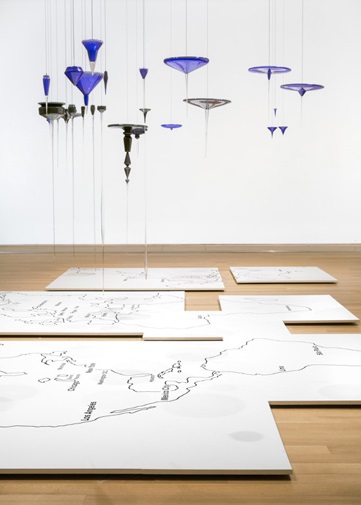 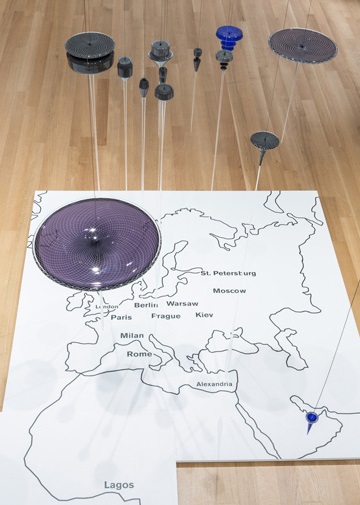 http://www.norwoodviviano.com/
Posted by Jeff at 7:00 AM