"Pierre Bonnard: Painting Arcadia" at the Legion of Honor

I've been trying to get to see "Pierre Bonnard: Painting Arcadia" at the Legion of Honor in San Francisco and its looming end date (May 15, 2016) motivated me to go this weekend. Several years ago I had seen an exhibit of Les Nabis (nabi is a Hebrew and Arabic word which means prophet), the Post-Impressionist group of painters with whom Bonnard was associated (previously here) but this was a treat to see an entire show--70 works of art--dedicated solely to Bonnard.

The show starts with a room of his early work, when he was emulating the flat dimensionality of Japanese wood blocks or the stylized outlines of cloisonné. His color palette from The Nabis forward was a paradoxical blend of dingy, dusty browns, greens, and blues with acidic oranges, yellows, and greens. The first work below, The Two Carriages (Boulevard des Batignolles) is an example of the former. But the second work, Twilight: The Croquet Game offers us a taste of the acidic colors to come. Also on display is his penchant for pattern. Like Klimt, it seems Bonnard loved putting several disparate patterns together in one composition. 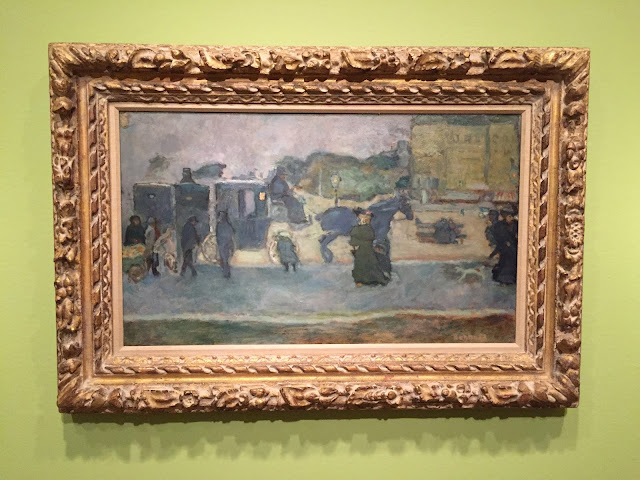 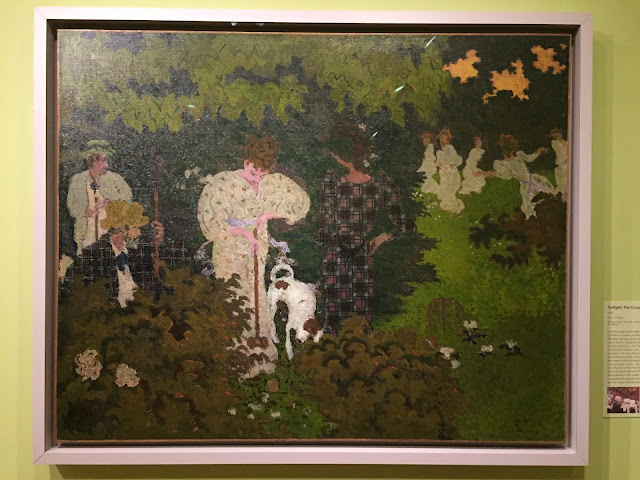 Speaking of pattern, his four-panel piece Women In The Garden shows a lovely mix of textiles and nature in a unique blend of Art Nouveau and a style that would soon be known as Fauvism. 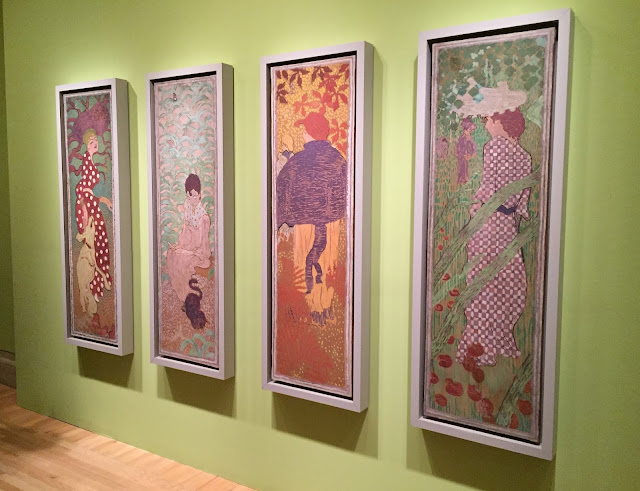 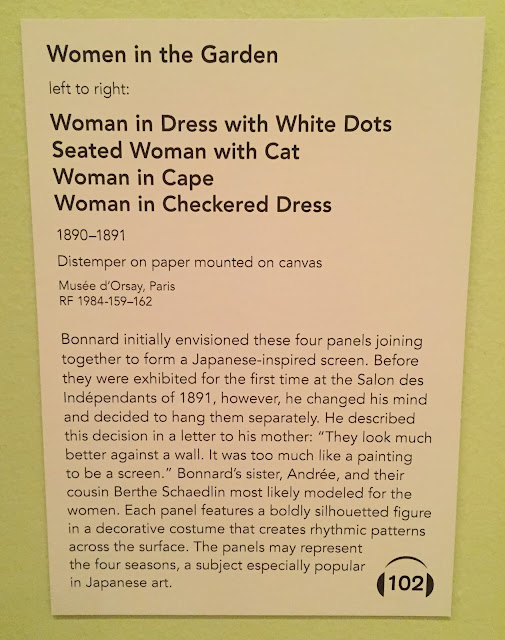 Bonnard was known for his interior scenes of intimate life. I especially like his images of tables with bowls, vessels, plates, and food. Notice how the perspective angles of these tables are slightly off kilter--they don't match the perspective of the room or objects around them. Below is A Bowl of Milk, The Table (with its foreground contents about to slide right off the edge and out of frame!), and The Breakfast Room. Seeing from two differing angles like this certainly precedes the same idea in Cubism. In Bonnard's brush work, one can clearly see the echo of Impressionism, along with a liberal dose of Pointillilsm. This, mixed with his intense and dusty color palette gives the viewer a sense of masterful, controlled chaos. He knew exactly what he was doing: what his artistic goal was and how to achieve it. But the way the paint and colors sit and interact--scribbles of color here, dots and doodles and dashes of color there--make it seem as though they have a life of their own, as though they are constantly agitated. 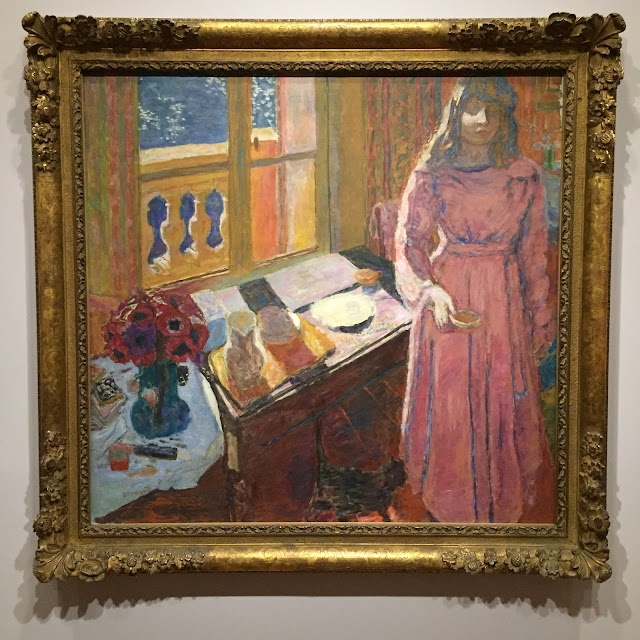 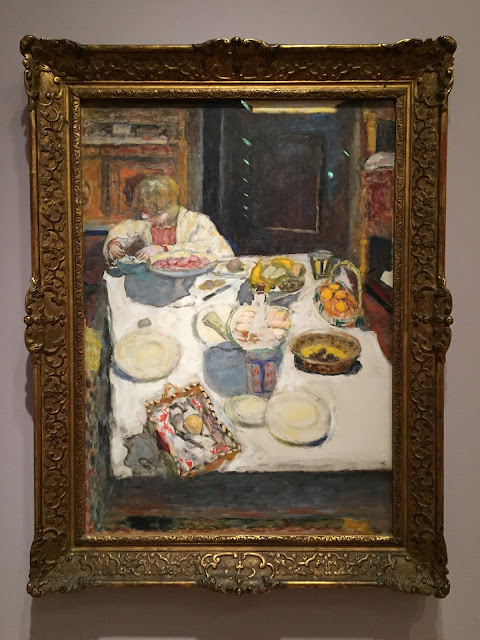 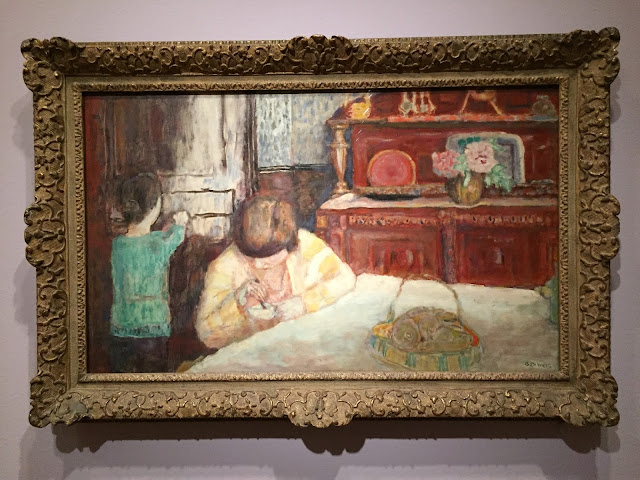 Look at this detail of The Breakfast Room. I marveled at Bonnard's brush work--it looks like he fairly scrubbed the canvas with his brush. Whereas many Impressionist artists used paint like cake frosting, Bonnard seems to have used it sparingly, almost in a dry brush technique. This gives his scenes a transparent, almost foggy quality. 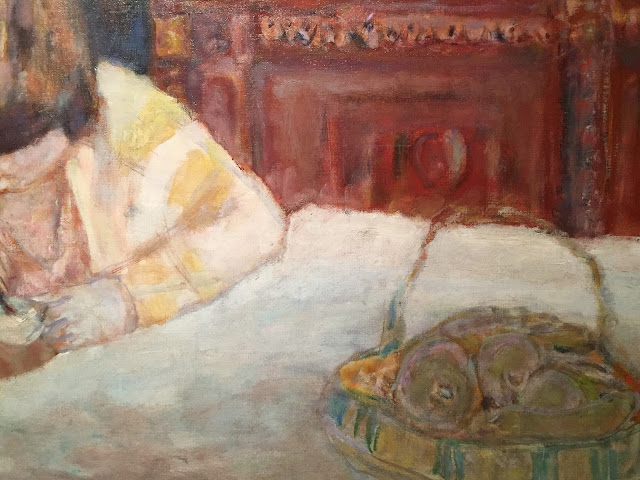 What also struck me about Bonnard is that, while he earnestly portrayed the subjects and subject matter he chose, he was also interested in creating an object that would go beyond the subject. He was interested in creating, or rather crafting a decorative object, like a textile that would hang on the wall. In that case, it is the object itself and not what it represents that carries value. In Nude in an Interior, we barely see his wife Marthe who modeled for him. We see so much more of everything else around her: the glorious yellow floral wallpaper, the strong vertical line of the robin's egg blue door jamb, the green and blue rug in the foreground, the dressing table, the Persian rugs on the ground in the next room, and the variegated far wall... these planes are abstracted and indeed turn into decorative surfaces. It's just all planes...scroll-like planes. 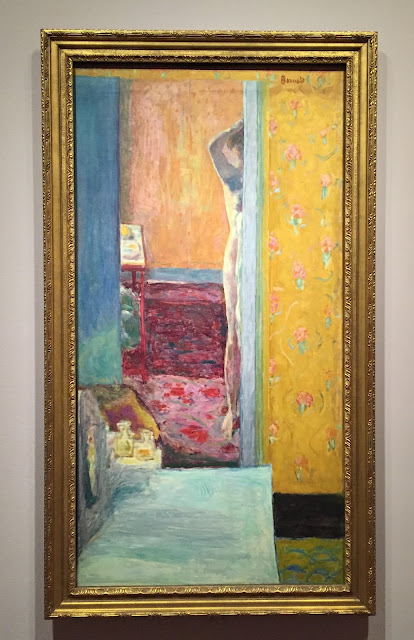 And in the final painting he created before he died at age 79, Almond Tree in Blossom, we see all the painting styles blended together to create a marvelous tapestry of color and shape. Yes, the subject is an almond tree in bloom, but really, this piece could be made into a fabric panel, a wallcovering...the sheer decorative quality alone even before considering the beautiful simplicity of the subject, composition, and colors is staggering. 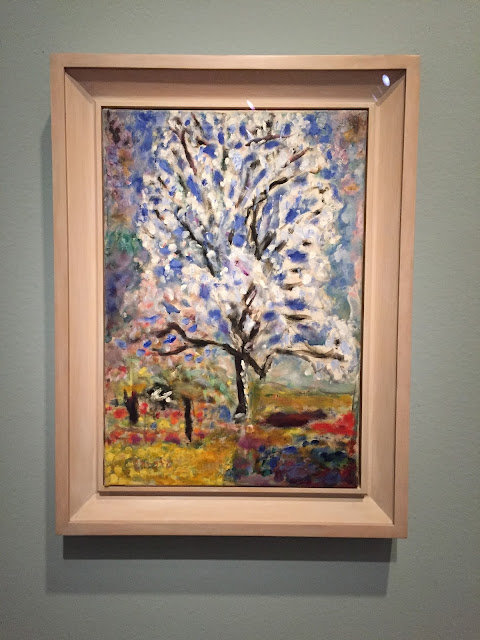 "Pierre Bonnard: Painting Arcadia" closes on May 15, 2016, so if you are in or will be in San Francisco, try to stop by. It is a wonderful opportunity to see a quite large collection of work by a major French artist of the 19th and 20th centuries. Below: a self portrait by Bonnard. 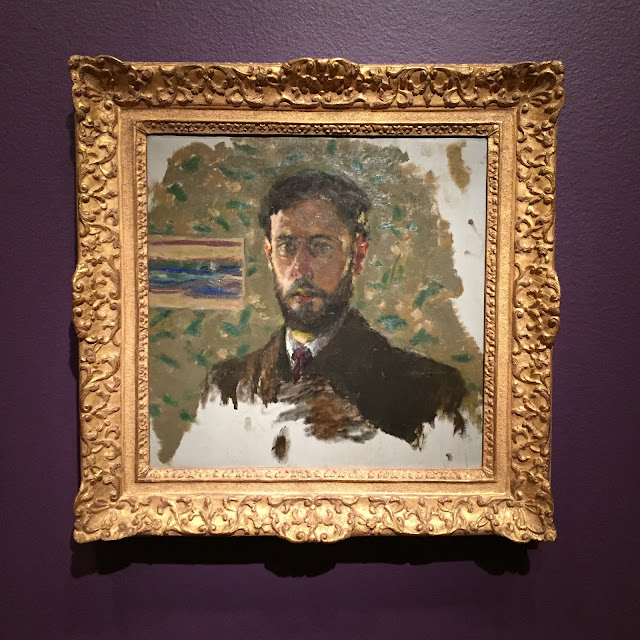