Since Craig Green burst onto the fashion scene several seasons ago now, he has quickly risen to be one of the top talents at London Collections: Men. His stripped down examinations of contrasting states of masculinity (aggression vs. nurturing, turning battle gear into ecclesiastical garments) manifest in some fascinating pieces, many of which feature his now-signature loosened and flowing straps and ties.

And this season, I feel that Green has gotten even more political. How could one not after the sh*t show that was 2016, not just locally, but globally with Brexit, the rise of the right on the continent, and the election of a monster in the US. But Green's oblique--or not so oblique--narrative for this Fall-Winter '17-'18 collection must reference the plight of the immigrant. The world was heartbroken at images of a young boy drowned trying to escape Syria, and this story is expressed in Green's moving sculptures. We have seafaring silhouettes with floppy Nor-easter hats and bulky quilted layers tied with tubes that Green himself says is to represent oxygen hoses, which quickly give way to Green's "armour"--with the afore-mentioned loosened straps--all made of Islamic carpets. The show closed with looks that surely signal someone carrying all that he owns in a duffel bag, bundled in a parka and probably a few other layers of clothing (most likely all that he owns), about to set sail for a better land...

I know there are those who are going to decry something as trivial as fashion speaking about something as monumental and important as immigrants, but isn't that the role of good art? No matter what it is, an artist is expressing himself through his medium, mirroring the world for good or bad. I don't think Green is attempting to "glamorize" the plight of the immigrant...as an artist he has demonstrated that he is too smart for that, with past seasons featuring some truly moving anti-war statements. He is not trying to capitalize on the tragedy of others. This is simply the vocabulary of the world around us making its way into the speech of an artist. 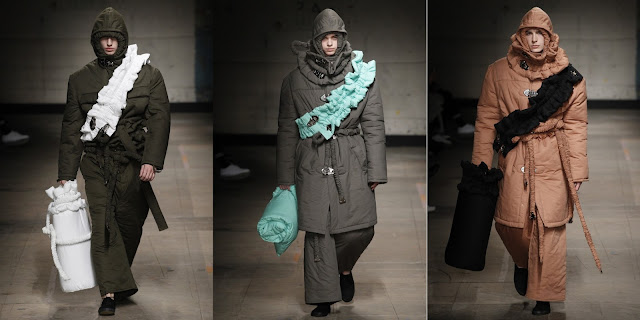