I'm so glad there is a Dame Vivienne Westwood in the world. She makes me happy and her creations brighten up the landscape quite a bit.

Whereas other designers work with a broad range of inspirations and can riff on anything from 1920s Paris to cavemen, Westwood riffs on herself. And more than any other designer, she can do that and come out with something extraordinary. It is her entire basic philosophy developed lo those years ago that make a Westwood garment what it is: the allusions to historical silhouettes, the references to cuts of garments from the Renaissance to the 1940s, and the explosive playfulness of 70s punk, which she, along with then-partner Malcolm McLaren (previously here), helped to invent. When she married her husband, the designer Andreas Kronthaler, she shared design duties with him. And while still actively designing at age 75, she has given control of the menswear division of her brand to Kronthaler...with her final approval of course. And he continues to riff on the DNA of the house just as well as she always has with some new, extra flourishes that dovetail beautifully into the Westwood oeuvre. Most notably, he has brought the toga/tunic/skirt/dress for men to the fore..which really is the future of clothing for men. More and more designers are showing men's and women's collections together (Westwood points out, "My very first shows were all mixed. Really, they were. Pirates, Buffalo Girls. . . . men and women together. Although, in this show some of the men are wearing dresses, which isn’t something they did much of before,") and the concept of menswear is changing to embrace alternative approaches.

And for this Fall-Winter '17-'18 collection back home at London Collections: Men--Westwood's first after having shown in Milan at Milano Moda Uomo for many years--Kronthaler gives us the exquisite suit cutting and tailoring (often asymmetrical, with those aforementioned historic flourishes) that is a hallmark of the house along with fantastic knit pieces. Also of note is the gigantic-scaled, jagged damask pattern on suits, and a pattern made up of a crowd of lurid faces--some sketched, some photographed--which included Dame Westwood herself in a sort of manic laugh. I don't mind that Westwood quotes herself since the original quote was so good, so original, so satisfying...we can stand to hear it again. 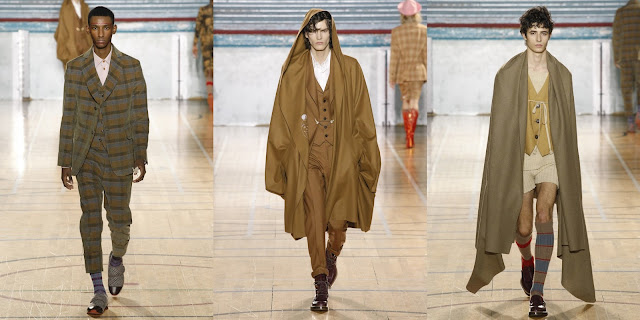 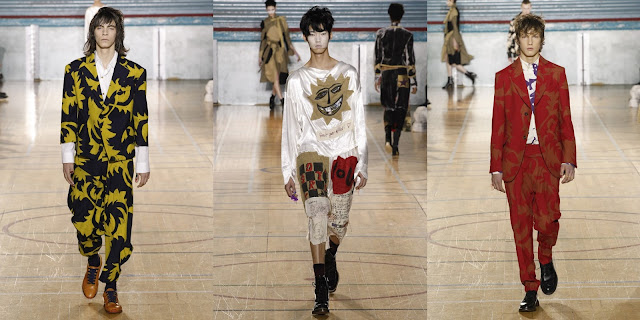 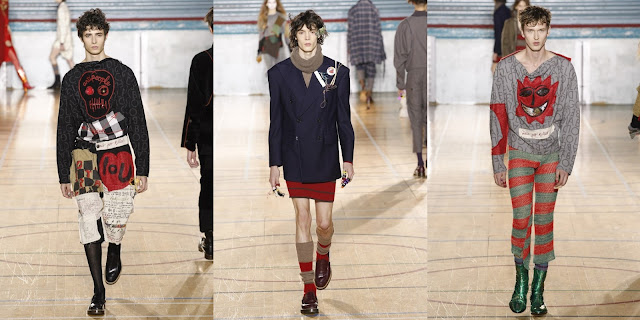 http://www.viviennewestwood.com/
Posted by Jeff at 11:58 PM