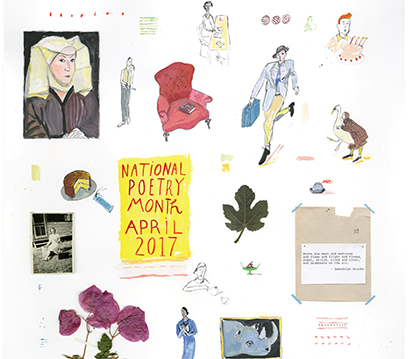 April is National Poetry Month 2017! Sponsored by the Academy of American Poets. This year's poster was created by the fabulous, delightful, and endearing Maira Kalman (previously here) and features a quote by former United States Poet Laureate Gwendolyn Brooks:
“Books are meat and medicine
and flame and flight and flower
steel, stitch, cloud and clout,
and drumbeats on the air.”

Throughout April, I'll be posting poems, some by me, some by others, as well as a series of lyrics to popular songs that double as exquisite poetry.

Poem in Your Pocket Day was originally initiated in 2002 by the Office of the Mayor, in partnership with the New York City Departments of Cultural Affairs and Education, as part of the city’s National Poetry Month celebration. In 2008, the Academy of American Poets took the initiative to all fifty United States, encouraging individuals around the country to join in and channel their inner bard. In 2016, the League of Canadian Poets extended Poem in Your Pocket Day to Canada.

And in honor of National Poetry Month, let's start things off with "He said I wrote about death," a lovely, aching poem about the truth of life by Kim Dower.

He said I wrote about death,

and I didn’t mean to, this was not
my intent. I meant to say how I loved
the birds, how watching them lift off
the branches, hearing their song
helps me get through the gray morning.
When I wrote about how they crash
into the small dark places that only birds
can fit through, layers of night sky, pipes
through drains, how I’ve seen them splayed
across gutters, piles of feathers stuck
together by dried blood, how once my car
ran over a sparrow, though I swerved,
the road was narrow, the bird not quick
enough, dragged it under my tire as I drove
to forget, bird disappearing part by part,
beak, slender feet, fretful, hot,
I did not mean to write about death,
but rather how when something dies
we remember who we love, and we
die a little too, we who are still breathing,
we who still have the energy to survive.