At London Fashion Week, Matthew Miller showed a sharp SS '18 collection in St. Sepulchre's Church. Miller said it was 1) inspired by the young generation who just became of age to vote and their "unadulterated freedom" (here is a staggering and encouraging statistic: a whopping 72% of 18 to 24 year-olds came out to vote in the recent British election last week, a sure sign that young people can prevent governments from veering to the Right, and creeping more and more toward Fascism)...and 2) a reaction against the current, oppressive, tired obsession with "streetwear" in fashion. While we optimistically celebrate #1, I personally thank you for #2, Mr. Miller! I have been bemoaning the "streetwear" and "sportswear" trend for several seasons now.

Although he playfully referred to his collection as "degenerate," with obvious references to Goth and Punk subcultures (bondage straps and smeared black lipstick), the garments themselves are elegantly tailored. Just take a look at the slim, well-cut trousers,tuxedo jackets, and that most-British of staples, the trench coat which in this collection was made in collaboration with British brand Hancock! Fashion journalist Sarah Mower says, "In a Brexit situation, supporting working-class specialist skills in local areas is among the most relevant stances a fashion designer can take." 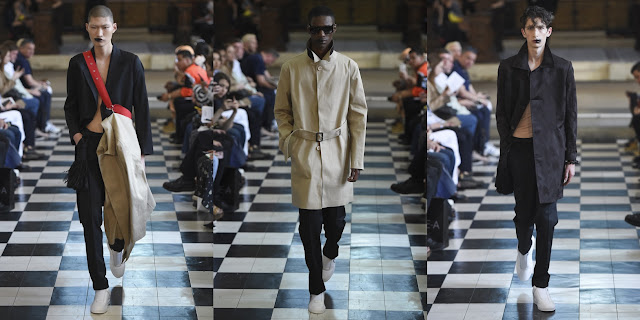 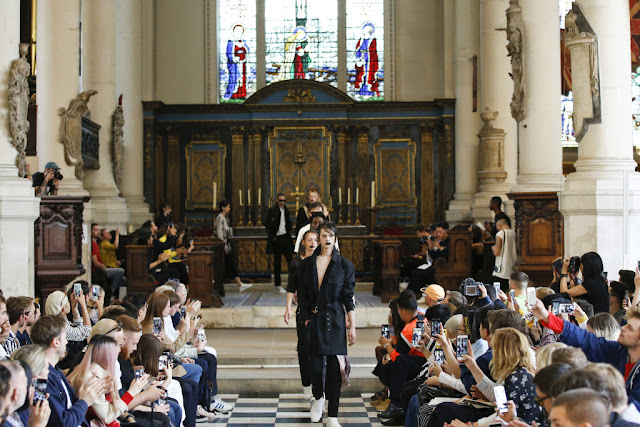 http://www.matthewmiller.eu/
Posted by Jeff at 1:00 PM