...the much anticipated second season of the Netflix original series "The Crown" with Claire Foy as HRH Queen Elizabeth and Matt Smith as Prince Philip, the Duke of Edinburgh. 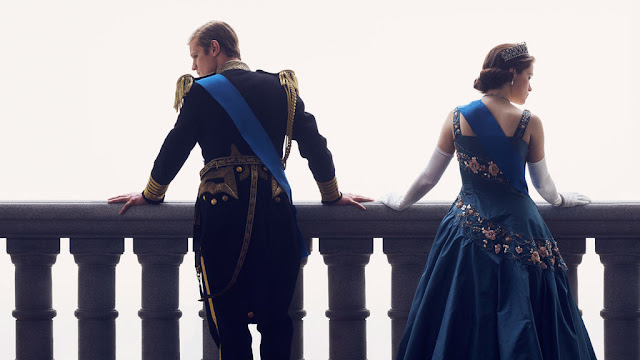 Where season one examined with great sympathy the life of Queen Elizabeth up to 1955, season two examines the years and events from 1956 to 1963 which includes the Suez canal crisis, visits from Billy Graham and the Kennedys, and ends with the Profumo Affair scandal. The series writers continue to humanize the Queen and her family, showing us that they are indeed "mere mortals" caught in exceptional--sometimes seemingly impossible--circumstances. There may be palaces and servants and lavish dinners, but there is doubt, pressure, and loneliness in an attempt to keep up the appearance of being super-human, always cool and in control.

Again, Claire Foy breathtakingly plumbs subtle emotional depths, and Matt Smith rightly continues to destroy any connection to Dr. Who with a portrayal of a complex and contradictory man (at least the way the character is written and Smith is playing him). All the supporting players in this pitch perfect period piece are marvelous as well.

The creators of the series plan for six seasons with the roles of all major players being recast every two seasons. Olivia Colman (who was so brilliant in "Broadchurch") has been cast as Elizabeth for seasons three and four while the role of Philip has yet to be announced. This leaves the final seasons of five and six to cover the later period of Elizabeth's life and events...possibly such as Charles and Diana's marriage and divorce and the subsequent death of Diana. And who will be the senior Elizabeth? I hope it is someone unexpected (and by that I mean someone other than Judi Dench--perhaps Imelda Staunton?).