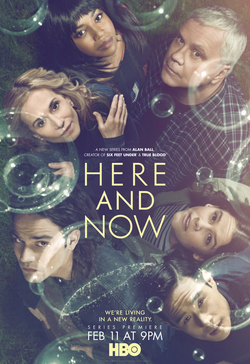 I like Alan Ball. How can I not? He wrote the glorious film "American Beauty." He created one of the most profound television series of all time, "Six Feet Under" (and he wrote and directed many of the episodes). And he turned a campy horror series of novels into the delightful "True Blood" (although it did stray a bit too far from the original books in the last seasons but he was no longer show runner at that point which might be a bit of an explanation).

So when I heard that he has a new series on HBO called "Here and Now," I was curious. It is another unlikely blend of genres, exploring an ethnically diverse family in Portland, which serves as a springboard for studying the state of our current sociological and political climate in the Unites States. But this drama/comedy also inexplicably weaves in elements of the surreal and supernatural, and, dare I say it, spiritual (Ball IS a Buddhist after all).

I have seen the first four episodes, and I am eager to see where this goes and how Ball intends to get us all there. I am intrigued...

If you have not seen it yet, it might not be too late. Try to see if you can find the already-aired episodes to catch up. It stars the masterful Holly Hunter and Tim Robbins as the parents of the family. It might intrigue you too.