Jun Takahashi at Undercover presented a very unexpected Spring Summer '20 collection at Paris Fashion Week based on...wait for it...Dracula and legendary artist Cindy Sherman's series of self portrait film stills. The train of thought that Takahashi rode in on was the idea that men have in themselves a capacity for violence. But interestingly, this violence took the form of exquisite tailoring. Maybe the devil comes in the form of a very handsome man. This might be another oblique statement on the idea of toxic masculinity...after all, in the United States men commit 90% of all homicides, they commit 80% of all violent crimes, they commit 97% of all mass shootings, and they represent 97.9% of arrests for forcible rape. Men, what the f**k are you doing???

So, is Dracula the ultimate male evil, a man who literally sucks the life from his victims? How much more toxic can a man get? And the presence of Cindy Sherman offers a glimpse of the lone woman, vulnerable and therefore necessarily vigilant? It's all up for interpretation. But we do know that this idea of violent men out of control is something that Takahashi has explored before. For Spring Summer 2019, he showed a collection of eight gang looks based on the 1979 cult film "The Warriors" (here) and for Fall Winter 2019, he showed a frightening collection based on, again, the gang in Kubrick's film "A Clockwork Orange" (here).

But back to the clothing: Look carefully since these black on black pieces hide a lot of detail, especially in a black space on a black stage. I love how Dracula is not seen quite directly but perceived through either satin appliqués or stitching that only outlines both Bela Lugosi's Dracula from 1931 and Max Schrek's earlier vampire from "Nosferatu" in 1922. Some pieces feature spider web stitching. This somehow segues into black and white images of Cindy Sherman, sometimes appliquéd, sometimes outlined, and sometimes outright printed. 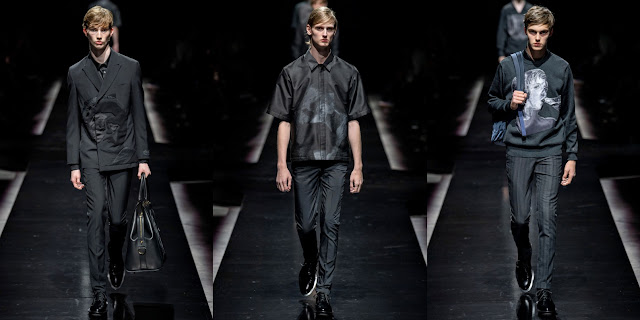 http://undercoverism.com/
Posted by Jeff at 7:00 AM