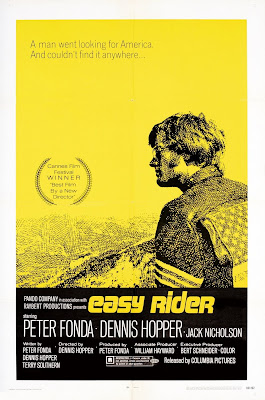 This iconic American film was imagined by Fonda, fleshed out by Fonda, Hopper and Terry Southern, directed by Hopper, and stars Hopper, Fonda and Jack Nicholson… and a disturbing assortment of real rednecks and "backwoods folks."

"Easy Rider" was a groundbreaking film during its time and created a lot of controversy. It reflected the cultural and societal upheaval that was happening in the late 60s and early 70s. By this time, the Summer of Love was over, and a very different mood was spreading across the country—a mood of darkness and disappointment. Race riots, Black Panther shootings and violent protests shook major cities, the Vietnam War continued to eat up lives and resources, and the riot at Altamont and the Kent State shootings were literally right around the corner. A new and different country was emerging and no one was sure what that new country would look like. Middle America was terrified of the change and fought back with hysteria and ignorance.

“Easy Rider” is ostensibly a road film, about two buddies, Wyatt, a.k.a. Captain America (Fonda) and Billy (Hopper) riding their customized motorcycles from LA across the southern United States, to visit New Orleans for Mardi Gras. They encounter interesting, odd, unusual—and dangerous—characters and places along the way. One of the most striking encounters is meal time at a commune—the camera pans around inside the circle of people gathered to give thanks for the food they have grown in a stunningly beautiful tableau of faces, some bored, some spaced out, some focused on another. It is an inspired scene, done all in one take.
Wyatt and Billy smoke pot and drink along the way… nothing outrageous, nothing that unusual. Except this was 1968 and Middle America fostered an absolute, crazed hatred for anyone with long hair, assuming instantly that they must be menacing, revolutionary hippies out of their minds on drugs and out to rape all their daughters or sons, out to steal and destroy. But the Captain and Billy are just normal hippies, trying to experience freedom on the road, and to have a good time.

The camera work is at times raw, but always imaginative--especially the final shot from a helicopter. The editing method in between scenes jumps back and forth between the last and next scenes several times, creating a jarring, nearly psychedelic transition. The scenery is breathtaking as they cruise through Monument Valley in Utah and camp out at night under the vastness of the New Mexico sky. This was one of the first films to visually and therefore thematically explore the emptiness and hollowness that the counterculture was finding to be at the core of the American experience. The ultimate cinematic expression of this emptiness was released the same year: Antonioni’s “Zabriskie Point,” nearly devoid of dialogue, echoing with cavernous desolation and scenes also set in the wasteland desert of the American southwest. The soundtrack was a very important part of "Easy Rider" too—one of the first films to use existing popular rock n’ roll songs to lend the film a sense of realism. "Easy Rider" certainly helped spawn the new "independent film" movement and usher in the "New Hollywoood of the 70s" with directors like Scorsese and Coppola.

Now, the frightening part is that Hopper and crew actually used real rednecks and “townsfolk” for the scenes in small towns. Hopper let them improvise their dialogue—“Go ahead, you can say whatever you want to say about us,” he told them. And they did. To be fair, to get them riled up, Hopper told them that Wyatt, Billy and George (Nicholson) had raped and killed a young girl on the outskirts of town. But their improvised dialogue does not address that...it takes an unrelated racist and homophobic turn instead. The vitriolic bile and contempt concealing their fear of “the long-haireds” makes these rural people seem like backward zealots—they are exactly the same kind of evangelical-American Taliban that exist in the same area today. So peculiar and disappointing to see how little has changed with racist “teabaggers” and insane Christians infecting that part of the country.

The first time I saw this film more than twenty five years ago, the sudden, explosive ending left me speechless. But that explosive ending could happen today, in the exact same way. Don't think it can't.

Recommend? Absolutely. It is a piece of cinema history and of American history.
Posted by Jeff at 11:02 PM