Dries van Noten is known as a master of pattern and his Spring Summer '23 collection at Paris Fashion Week shows some of the interesting graphics he is known for but mostly we get a collection about cut and fit.

Van Noten says the hard turn to the right the world has taken, along with the oppressive political and social systems that accompany such turns inspired him to look at two subcultures that flourished in previous bleak periods. "The Zazous in Paris in the 1940s, and Buffalo in London in the 1980s. Both were in periods which were a bit similar. Hard times. So we wanted to make our own version of that." While I do recall the Buffalo look started by stylist Ray Petri in Thatcher's England of the 1980s (Buffalo was a totally cool pastiche of multiple ethnicities, classic English tailoring, and sportswear), I was not familiar with Les Zazous. They were a group of young people in Nazi-occupied France who loved dressing to the max, jazz, and all things British and American (especially literature and music). According to Simone de Beauvoir writing at the Café de Flore in 1942, "The young men wore dirty drape suits with ‘drainpipe’ trousers under their sheep-skinned lined jackets and brilliantined liberally their long hair, the girls favored tight roll-collar sweaters with short flared skirts and wooden platform shoes, sported dark glasses with big lenses, put on heavy make-up and went bare-headed to show their dyed hair, set off by a lock of different hue." They were contemporaries to the Zoot Suit and precursors to the Teddy Boys. Without their rebellious spirit and middle-finger-to-the-Nazis, we would not have had Mods, Teddy Boys, Glam Rockers, or Punks.

The fate of the Zazous was not good: supporters of the Vichy government hunted them down at their regular cafés and jazz clubs to beat them senseless, shave their heads, and send them to work camps in the French countryside. And we know the outcome of the Buffalo fashionable club world was not great either: the community was ravaged by AIDS as thousands of talented, intelligent, wonderful men were destroyed in their prime. So this inspiration for Van Noten was not taken lightly.

Here he shows us new rebels, shown on a classic Parisian rooftop surrounded by Mansard roofs. A nod to the suits of the Zazous lie under feminine lingerie-pink corsets and camisoles, making a statement about gender. And a nod to the Buffalo look manifests in large text-based graphics and colorful, sporty pieces that look like they come from the world of Motocross. When I first saw this collection, it seemed a bit muddied and random but like so many things in this world, the more you understand something and discover it in a deeper way, the more things make sense. Van Noten has created a satisfyingly cerebral collection that is also wonderfully pleasing to the eye and ultimately very wearable. 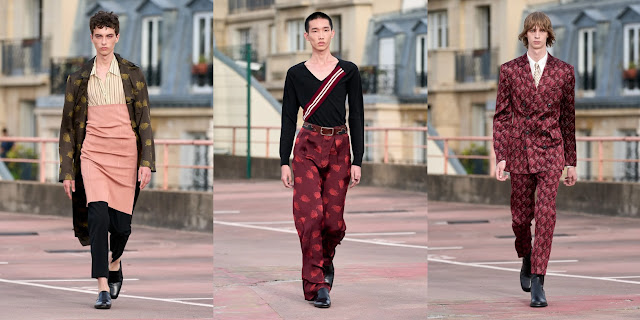 https://us.driesvannoten.com/
Posted by Jeff at 7:00 AM No comments:

I always love seeing a Yohji Yamamoto collection...the highly regarded and highly decorated designer is one of those elevated, iconic artists who are singular. While I love when a designer takes inspiration, or inspirationS from some wild, fascinating, interesting source, Yamamoto exists in a realm of his own mythology, much like Rick Owens. Yamamoto has his own vernacular and his own internal logic. His creations--East and West elements combined into a future/retro (sometimes ecclesiastical) sensibility, layered and slouchy Bohemian chic garments, flowing asymmetrical cuts, all awash with an insouciant, rippling sense of Romanticism worthy of any French Symbolist poet--are timeless, since they are not necessarily tethered to anything outside of their orbit.

So for his Spring Summer '23 collection just shown at Paris Fashion Week, he concentrated on a classic silhouette: the suit...but the looks were Yamamoto-fied with touches like zig-zag plackets on jackets, loose flowing wide-legged trousers, skirts, and aprons. For the last many seasons, Yamamoto has been peppering his creations with little slogans that serve as cryptic shorthand to his ideas and mood for creating the collection, and this year we have quotes like "What are you made of?" "Sh***y life," and "I am so bored with rules."

Yamamoto's unofficial nickname is the King of Black so it was nice to see a burst of color late in the collection. Some of the suiting pieces featured designs and colors that were nearly psychedelic! But at the heart of the collection, we have tailoring. As fashion journalist Laird Borrelli-Persson noted in her Vogue review of the show, Yamamoto's clothes not only look different but they are constructed differently. 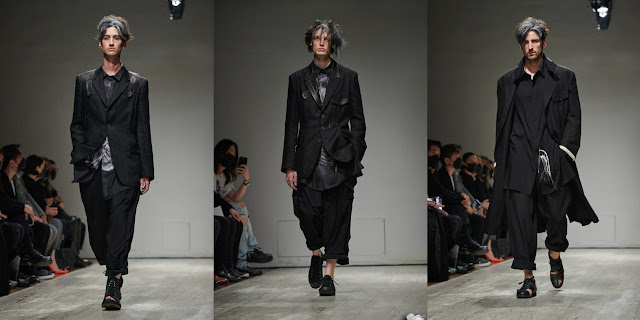 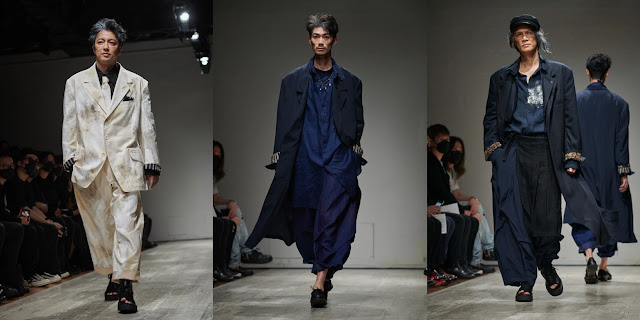 Also of note: some pretty cool work boots/brogues cut up to be sandals: 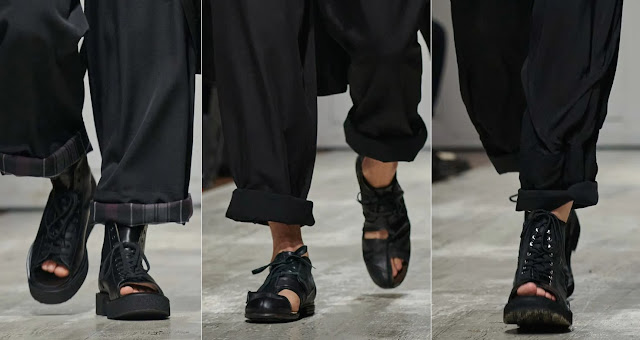 https://www.yohjiyamamoto.co.jp/en/
Posted by Jeff at 7:00 AM No comments:

Rick Owens. Paris Fashion Week. SS 2023. Amazing collection and an amazing presentation with flaming orbs being hoisted and dropped into the water of the fountain in front of the Palais du Tokyo. Read Owens' notes below for that symbology.

THIS SEASON’S COLLECTION IS NAMED ‘EDFU’ AFTER THE EGYPTIAN TEMPLE.

I HAD RECENTLY RETREATED TO EGYPT WHERE I FOUND GREAT COMFORT IN THE REMOTENESS AND SCALE OF ITS HISTORY. MY PERSONAL CONCERNS AND GLOBAL DISCOMFORTS FELT PETTY IN THE FACE OF THAT KIND OF TIMELESSNESS. LYING DOWN IN THE DIRT WITH THE VALLEY OF KINGS WITHIN VIEW WAS A PERSPECTIVE I LIKED. THE TEMPLES, STARTED BY ONE CIVILIZATION, SEIZED AND ADDED ONTO BY ANOTHER, COMPLETED BY ANOTHER AND THEN UNEARTHED BY YET ANOTHER, WERE REASSURING IN THEIR STOIC PERMANENCE.

WE HAVE ALL BEEN SO DISTURBED BY THE WAR AND CONSTANT ONLINE STONE THROWING, I WANTED TO PROPOSE SOME ORDER AND DISCIPLINE... I USED SOME RIPSTOP NYLONS THAT HAD A BUTTERFLY WING LIGHTNESS WITH GRAPH-LIKE CONSTRUCTIONS THAT LENT SUBTLE SOOTHING GRIDDING ON THE BODY IN DYNEEMA, WHICH IS A PATENTED FIBER CONSIDERED TO BE THE STRONGEST IN THE WORLD.

I REDUCED HARDWARE AND VISIBLE CLOSURES TO KEEP THINGS QUIET. I WANTED SIMPLICITY BUT I STILL WANTED EXAGGERATED SHAPES TO GENTLY TEASE ALL THE RIGHTEOUSNESS AND BIGOTRY THAT CREATE SO MUCH CONFLICT IN THE WORLD.

TAILORING WITH EXTREME SHOULDERS COMES IN CRISP COTTON OR LAYERS OF SILK CHIFFON, SOME IN LOUD AND FOGGY PLAIDS. COATS AND JACKETS ALSO COME IN CHIFFON SUSPENDED FROM RIGID MESH SHEER SHOULDERS. THE TRANSPARENCY CONTINUES WITH JACKETS, SHIRTS, AND JEANS CONSTRUCTED IN APPARITION LEATHER – A COW LEATHER USING GLYCERIN DURING THE TANNING PROCESS AND AIR DRYING WITHOUT BEING DRUMMED WHICH GIVES IT A TRANSPARENT FINISH.

MY BODYSUITS AND SHIRTS HAVE GOTTEN BIGGER THAN EVER AND THE SILHOUETTES ARE EITHER TIGHTLY CINCHED OR LARGE AND RELEASED TO FLOAT AS FAR AWAY FROM THE BODY AS A GARMENT CAN.

MY EGYPTIAN SOJOURN LED ME TO DEVISING TULLE FLYPROOF ROBES WITH FACE COVERING HOODS WORN OVER SILK CHARMEUSE SHIRTS TWISTING AROUND THE HIPS AND TRAILING ON THE FLOOR, PROVIDING SLASHES OF SLITHERING COLOR.

COLORS ARE DELIBERATELY KITSCH AND LOUD WITH DENIMS LACQUERED IN AN IRIDESCENT SCARAB FINISH WHICH ALSO COATS PIRARUCU, A SKIN I USE OVER AND OVER. FISHED AS A FOOD SOURCE BY INDIGENOUS COMMUNITIES IN THE AMAZON FOREST, THE SKINS ARE THEN SOLD AS A WASTE PRODUCT GENERATING INCOME FOR THEM.

I HAVE DEVELOPED A CAPSULE IN COLLABORATION WITH BONOTTO, A 4TH GENERATION TEXTILE MILL FOUNDED IN 1912 JUST BELOW THE PREALPS IN VENETO, WHICH INCIDENTALLY HAS ONE OF THE LARGEST FLUXUS ART COLLECTIONS IN THE WORLD. ALL THE FABRICS WHICH INCLUDE MINIMALLY FINISHED COTTONS AND RAW WOOLS, ARE WOVEN ON THEIR VINTAGE 1950S LOOMS.

I ASKED PARADOXE, A PARISIAN LABEL DOING ARTISANAL WORK WITH DENIM TO COLLAB ON SOME OF OUR DENIM PIECES. THEY PAINSTAKINGLY UNWEAVE USED AND WASHED DENIM AND THEN REAPPLY TO FINAL GARMENTS IN A PROCESS THAT FEELS AS DEVOTIONAL AND MEDITATIVE AS LACEMAKING IN A CLOISTER.

MUSIC IS A SWOOPING, GRATING, UNHINGED EXCLUSIVE MIX BY EPROM AND SHADES (SHADES IS COMPOSED OF EPROM AND ALIX PEREZ) REFLECTING THE UNTETHERED, WONKY CURRENT CLIMATE.

OUTSIDE OF LUXOR, AT THE TEMPLE OF EDFU, OVER THE MAIN ENTRANCE, IS A CARVING OF A WINGED SUN, SYMBOLIZING THE GOD HORUS WHO REPRESENTS THE TRIUMPH OF GOOD OVER EVIL. IN TODAY’S PRESENTATION, A BLAZING SUN CROSSES THE SKY, FALLING TO CRASH TO THE GROUND OVER AND OVER AND OVER AGAIN. SENSELESS DESTRUCTION ON REPEAT SINCE THE BEGINNING OF TIME. 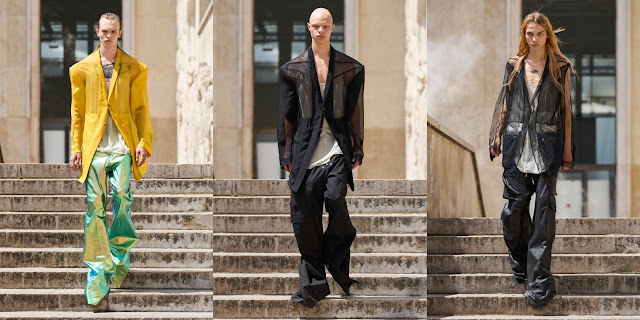 https://www.rickowens.eu/
Posted by Jeff at 4:34 PM No comments:

EGONlab was named for the iconoclastic Viennese artist Egon Schiele, and its founders and life partners Florentin Glemarec and Kevin Nompeix showed only their second physical show at Paris Fashion Week (see their first one here). For this Spring Summer '23 outing titled "Wonderland," they continued their work with sharp tailoring but added a great twist with tops of large paillettes and sequined patterns. Also in the mix: leather hot pants, eyelet trousers, and awesome platform thigh-high boots and shoes (we must thank Rick Owens for normalizing them to the point where platforms can now be a part of anyone's collection).

I love how African designers are getting some attention at major fashion weeks at Milan and Paris. For Spring Summer '23 in Paris, South African designer Lukhanyo Mdingi showed a collection that honored the past and traditional African colors and designs while being thoroughly forward looking. He calls the collection "Burkina" after the CABES Textile Community in Burkina Faso with whom he collaborated to create the lightweight knits seen below. I really love the long tunics and tops with appliqués of woven organic forms. It is a truly beautiful collection.

Please do take a few minutes to watch this moving documentary about the CABES Textile Community in Burkina Faso and the Ethical Fashion Initiative.

https://lukhanyomdingi.co.za/
Posted by Jeff at 6:59 AM No comments:

It's always fascinating to see what those in the fashion industry wear to the shows...here is a collection of images of people coming and going during Milano Moda Uomo. There are a few celebrities in the mix, too...