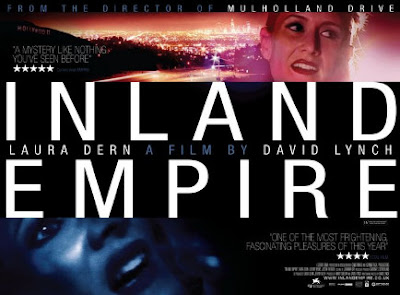 After my previous post about “Meshes Of The Afternoon” by Maya Deren and her influence on David Lynch, it seemed like the perfect time to view and write about Lynch’s 2006 epic “Inland Empire.”
But writing about “Inland Empire” is proving difficult because the film exists in such a pre-verbal, pre-conscious state, but I have come up with a few things I want to point out.

First, the facts.
The film is three hours long. And I must hasten to add that I did not care.
It is about—and saying the film is “about” something is a little bit of a stretch—a Los Angeles actress (played by the phenomenal Laura Dern) cast in a remake of a cursed Polish film that was never completed due to the death of the two lead actors. As she shoots the film, she begins to lose herself in the role she is playing… quite literally. That is what “Inland Empire” is “about” in a very general sense. At least those are the lucid plot points that stick out, that one can grab onto.

Lynch shot the film in southern California and Poland over a three year period on a small hand held digital video camera (he has vowed never to work on film again). He had no finished script to work from. Instead, over this three year period, he would think up a scene, write it down and film it quickly. Using only a small hand held camera allowed him to work in this free, spontaneous way, translating what was in his subconscious directly to a finished product without a cumbersome crew and the traditional time-consuming method of Hollywood filmmaking.

The film is an interesting, deliberate mix of shaky, almost amateurish-looking hand held camera work, and, by contrast, long slow tracking shots that must have been filmed from a dolly. And here is another shocking fact: he often used available light—a no-no in traditional filmmaking—along with odd, unconventional lighting techniques like ordinary flashlights and strobes.

Now, on to the important things.
Lynch has created this film in his established and substantial Gothic, decaying-Los Angeles style. And like many other David Lynch films, the characters morph into other characters as the story twists and turns. But more than any other David Lynch film, and more than any other film I can think of period, “Inland Empire” captures the texture of dreams. It is the blueprint of a dream—of what it is to dream, what it feels like to dream. The action in the film is cyclical. Things happen again and again, perhaps slightly different from the last time they happened, but they circle around themselves nonetheless. And exactly like a dream, some of these things end up happening before or after other events that preceded or followed them the last time. Each segment has a life of its own and can be re-arranged; time in “Inland Empire” is malleable, just like a dream.

In films, dreams are traditionally shown as a dreamer floating through a foggy ground staffed with an odd assortment of people or objects. Often a dream sequence in a film can be some sort of obvious, heavy handed take on what the dreamer is thinking. Only one other time have I seen the medium of film get the texture of a dream correct: in an episode of the HBO series “The Sopranos” called “The Test Dream,” we see a twenty-minute dream sequence that accurately recreates dream logic and the succession of places, situations, feelings and people that dreams can present.

Here in “Inland Empire,” Lynch has captured these non-sequiturs, or rather what seem to be non-sequiturs to our conscious minds. The only way our subconscious minds can communicate with us is by showing us pictures…symbols. It can’t come right out and tell us something. The concept or the word for a thing is useless to the subconscious. That is not how the subconscious works. Everything—characters, events, places—is related in “Inland Empire” in this symbolic, picture-showing, pre-verbal, pre-conscious way. All these things are all linked, despite time and location shifts.

In this symbolic vein, he uses another element to conjure the feeling of a dream: dream logic. In one sequence, Laura Dern is told to “light a cigarette, burn a hole in the silk, fold it over and look through the hole.” She does so and is granted a view into yet another reality within this film. These cryptic instructions are exactly the kind of symbols our dreaming subconscious deals in.

Lynch fashions this dream of "Inland Empire" into a nightmare. Again, I have never seen a film so accurately capture the feeling of a nightmare. And this nightmare is about the psychological states of anxiety, confusion, despair and dread. He steeps his story in claustrophobia—his characters exist in small, tight spaces. He even manages to make a cavernous sound stage into something closed and pressing. Laura Dern is trapped in sparse, squalid rooms dimly lit by a single old table lamp or in long dark hallways with a faint sconce. As the film progresses, this claustrophobia, this feeling of being trapped gives way to a feeling of being imprisoned. Characters inexplicably cry throughout this film, infected with a sense of something wrong but not knowing exactly what. It’s the feeling you get when you are alone in an unfamiliar place, perhaps in the dark… the feeling that something is behind you. I felt this unease, this sense of something wrong as well as the claustrophobia. I had a subconscious recognition of these states and was tense and frightened during this film.

I must also mention the sound design and music since it contributed greatly to the free-floating anxiety and terror in the film. The far away howl of a mournful train, muffled and menacing machinery, echoes, and downright frightening, unidentifiable sounds swirl through “Inland Empire” ratcheting up the confusion and fear. And it should be noted that David Lynch composed sections of the film score himself.

Like a dream, I perceived “Inland Empire” as a whole, but the individual elements that make it up—the symbols—somehow remain greater alone than their sum.
I think David Lynch created the film in that same way. The ideas might have come to him one by one, but his subconscious was always in charge, weaving together seemingly unrelated fragments into a compelling, mysterious, tapestry of pictures and symbols. Just like a dream.

Recommend? Yes. Yes. Yes. The more I reflect on “Inland Empire” the more I am drawn into it, and the more amazed I am by it. But this abstract film is not for everyone. It is something that needs to be experienced, not “watched.” And it needs to be experienced for what it does, not what it is about or what it means. Indeed, I believe it cannot be interpreted or understood in a traditional sense. In this way, I think this is a truly revolutionary film… the first film in history that is not really a film. It only works if you encounter it out of the corner of your eye. If you look directly at it, it fades. Just like a dream.

I thoroughly enjoyed this film! It worked on many levels, all of them dreamlike.