The Pleasure of Peter's Company

I had the honor of being in the presence of the great Peter Murphy last night; he was in the pioneering, seminal Goth band Bauhaus and has had a remarkable solo career after Bauhaus disbanded (for the first of several times) in 1983. Murphy is currently on tour in the US to support a new release out in June.

I must say that I snapped up tickets to this show to right an old imbalance. Many, many years ago, when I worked at a record store here in the Bay Area, a coworker said to me one evening in 1982, "I'm going to see Bauhaus at the Berkeley Stone for $7. D'yawanna go?" I had to work a later shift and thought driving to Berkeley after a long day seemed unexciting... and I said no. IDIOT. It is one of the few small regrets I have harbored over the years. So when I read that Peter Murphy was coming to town, I thought now was the time to make a full circle and close that open ticket. And I am thrilled to have made the right decision this time. 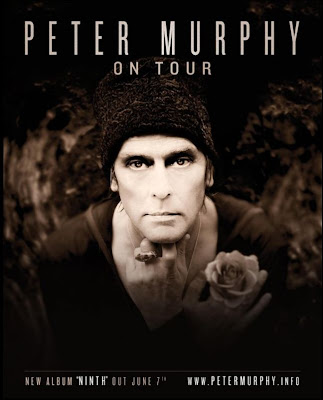 It was one of the more unexpected concerts I have ever been to--and I've been to a LOT of concerts--for a variety of reasons. He opened the show with a chilling, ominous version of "Zikir," a song from the final Bauhaus release of 2008 titled "Go Away White," in which he drones, "Loves me...loves me not." In fact, the first half of the evening was pretty chilling and ferocious and happily included several Bauhaus songs such as the brittle, skewed "Silent Hedges," and the jagged, shrieking "Stigmata Martyr." And much to my surprise, and without any warning, he managed to weave the Bauhaus classic "Bela Lugosi's Dead" into a rendition of one of his solo songs!
The second half of the evening featured more of his solo work which tends to be a little more poppy and accessible as well as reflecting his interest in metaphysics, spirituality and Sufism (he is a practicing Sufi and has lived in Turkey for the last twenty years). He and his band performed his biggest hit "Cuts You Up" as well as "Disappearing," "Subway," "I'll Fall With Your Knife," "Marlene Dietrich's Favorite Poem," and "All Night Long" in which he spoke the French sample from the Cocteau film "La Belle et la Bête" in lieu of actually playing it! He also gave a nod to his friend and past co-performer Trent Reznor by covering the Nine Inch Nails classic "Hurt" (which, as many of you may recall, was also covered by Johnny Cash just before his death!).
But the true unexpected part of the evening came with the banter and stories in between songs. Since this was my first time seeing Murphy in concert, I was not prepared for how simply chatty he is! The creepy theatricality and musical momentum were brought to a standstill several times as the show morphed into a confessional/ stand-up comedy/ spoken word performance. At first he joked, “Surprise, we’re not going to play any more songs, I’m just going to talk for another hour,” which would have been fine with us since his chatter was so amusing and entertaining. By his own tongue-in-cheek admission, he apparently is a shy British Catholic who only wants to be loved and held! By turns silly, joking and dry and then disarmingly honest and sincere, he said he still gets blown away when he sees people mouthing the words to one of his songs while he sings: "Wow, someone else knows my song! Cool!" Several times, he expressed tremendous gratitude for his fans and for being able to do what he loves doing. Far from being the de rigeur "thank you" from a "rock star" to his audience, his expressions of gratitude were actually quite touching and intimate.
It was a marvelous evening all around, one I will not forget; you can see two pictures from my inadequate camera phone below. 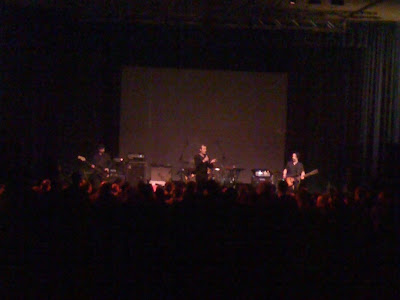 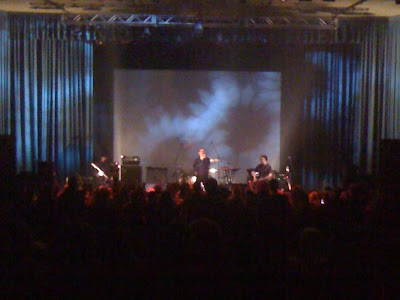 Below is the 1988 video for his hit "All Night Long" in which the aforementioned Cocteau sample occurs. The visual style of the video is an homage to the Cocteau film as well...

And here is the beautiful and highly stylized iconic opening credits of "The Hunger" starring Catherine Deneuve and David Bowie. Bauahus was the group playing "Bela Lugoi's Dead" in the nightclub while vampires Bowie and Deneuve picked their victims for the evening. Peter Murphy performs the song to within an inch of its life... simply incredible.

Oh, it sounds like a wonderful evening. And how great for Peter to be so warm and chatty, when one tends to think of him as the distant Bauhaus Goth Rocker Guy!

I think it's awesome that you went.