Please say NO to the Salvation Army 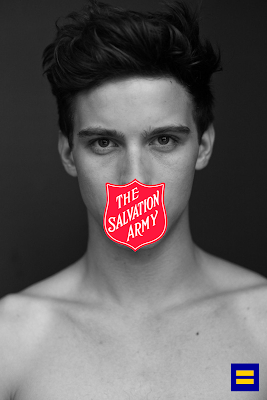 Just a friendly reminder to not put your change in the red buckets this year!

Why? Read the shocking information below.

“The Salvation Army doesn’t believe that gays and lesbians should ever know the intimacy of any loving relationship, instead teaching that ‘Christians whose sexual orientation is primarily or exclusively same-sex are called upon to embrace celibacy as a way of life.’" - (source)

“The Salvation Army openly says that ‘practicing homosexuals’ aren’t welcome in their organization and they have lobbyists in D.C. and abroad who work to prevent gay rights legislation from being enacted." - (source)

“The Salvation Army does not only discriminate against gay and lesbian people, it also works politically against LGBT rights all over the world." - (source)

So while some of your nickels and pennies are going to hunger relief or “Christmas Assistance” just know that a large portion of your donation is going toward lobbying governments worldwide for anti-gay policies - including an attempt to make consensual gay sex illegal.

There are so many other ways you can help this Christmas season, without supporting harmful, destructive practices and ideas:
Consider donating to:
*Goodwill
*Red Cross
*Doctors Without Borders
*Habitat for Humanity

Information about the Salvation Army from the Human Rights Campaign:
http://www.hrc.org/resources/entry/stances-of-faiths-on-lgbt-issues-salvation-army


via Science Is A Candle In The Dark
Posted by Jeff at 8:00 AM