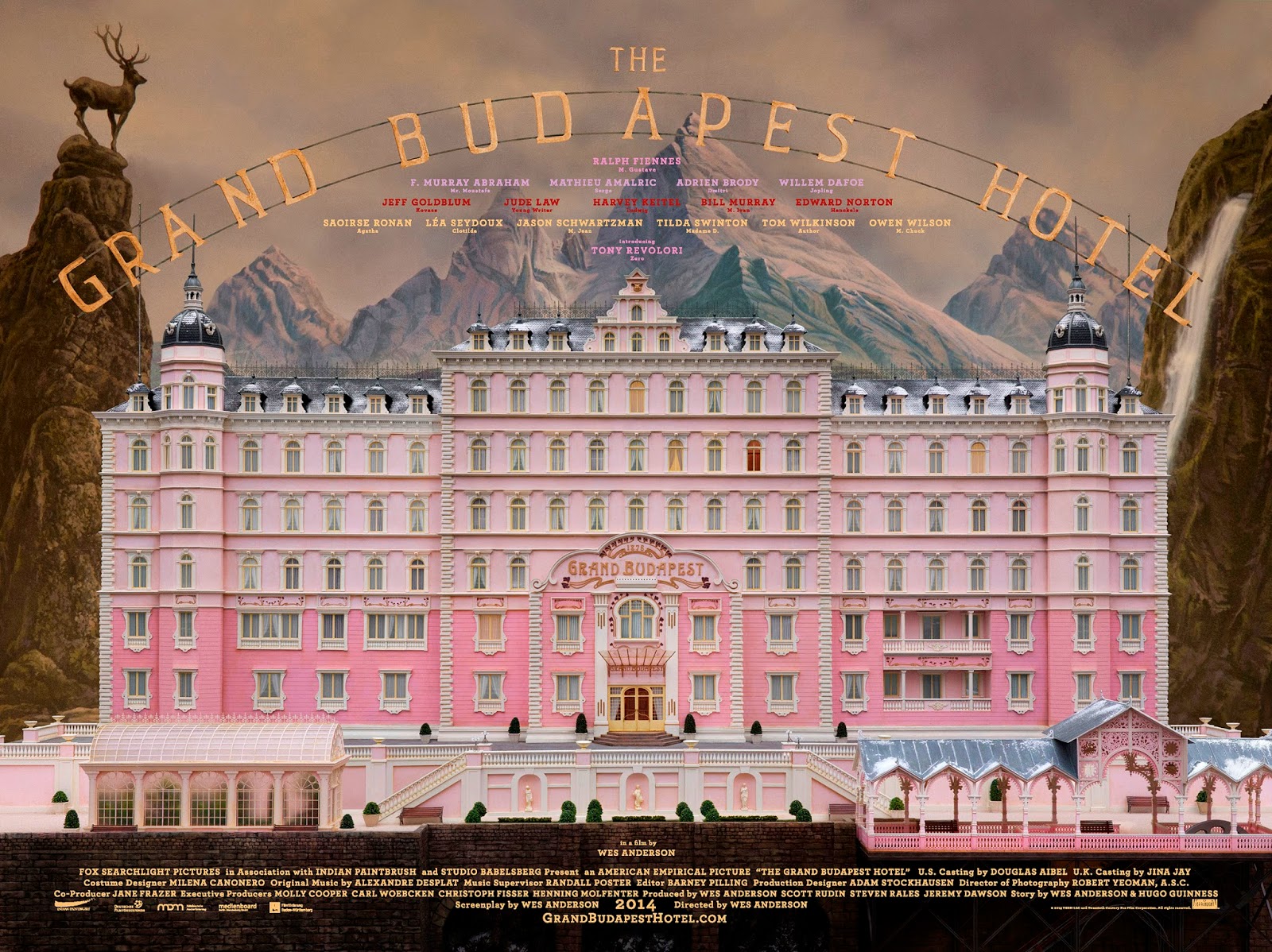 A Wes Anderson film is usually a cross between some kind of fairy tale and a piece of literature that is equal parts tragedy and straight-faced comedy. “The Grand Budapest Hotel” does not disappoint in that regard. It is rife with all of the Anderson-isms which make his films so charming, memorable, and special. But in it we have the added bonuses of a crime mystery, and an adventure story!

First, it might be helpful to clarify that the Budapest part of “The Grand Budapest Hotel” is not meant to be the actual city of Budapest. It is simply the name of the hotel where the tale takes place. And this fictional hotel is located high in the snowy Alps, in the fictional country of Zubrowka.

Much like Anderson’s previous film “The Royal Tennenbaums” (a book motif runs through that film: we see pages of a book open on to chapters, the first few sentences of which describe the action we are about to see; and most of the characters in that film are authors, academics or playwrights), “The Grand Budapest Hotel” owes a great deal to literature and a literary ideal. Indeed, it is presented as a story within a story within a story within a story. Anderson, in the credits, says the film is inspired by the work of Austrian author Stefan Zweig (1881 - 1942), who used this device in many of his short stories, and in particular his novel BEWARE OF PITY.

A young girl in the present visits a monument to The Author in an unidentified Eastern European city, and sits to read a chapter of his book he wrote about The Grand Budapest Hotel. We go back in time to 1985 to see The Author before his death, about to read his story to a video camera. Then another jump back in time to 1968 when he visited the Grand Budapest and met the owner of the establishment; the owner related a fantastical adventurous story to the author. And in our final jump back in time, we see our main story itself, set in 1932. It’s a touching device that suggests the imperceptible ways our stories live on, the way we touch other lives without knowing or even guessing that we ever could.

Once we are safely ensconced in 1932, we follow the concierge of The Grand Budapest, one Gustave H, through his exploits of loving a coterie of older women who come to stay at The Grand Budapest, many of them solely to spend time with Gustave. An untimely death, a police chase, good guys/bad guys, pre-World War II references to Fascism/Nazism and the looming ethnic cleansing, a love story, a smattering of slapstick, delectable pastries reminiscent of Ladurée, and the pastry colored hotel itself are swirled together in a delightful, fast-paced fable/fictional memoir.

The cast couldn’t be more stellar: Ralph Fiennes, Adrian Brody, Willem Dafoe, Jeff Goldblum, Edward Norton, F. Murray Abraham, Jude Law, Harvey Keitel, Bill Murray, Jason Schwartzman, a nearly unrecognizable Tilda Swinton, Owen Wilson, Bob Balaban, Tony Revolori, and Saoirse Ronan. All the details are stunning, as they are in every Anderson film. The production design is exquisite (marvelous color palette and costume design) and the period details are correct without being “only” a period film. Anderson’s colors, fable-like syntax, and highly stylized framing (see the wonderful Kogonanda video survey below) keeps it in Anderson-land. He manages to create entire, self-referencing worlds that run on their own internal logic; a satisfying and monumental feat for any artist in any medium.

Recommend? Yes. It is a fun romp with a sort of melancholy, unsettling core. Anderson’s vision is a quirky one to most people, so understand that you are going to see a unique experience, one that is not easily categorized or identified. 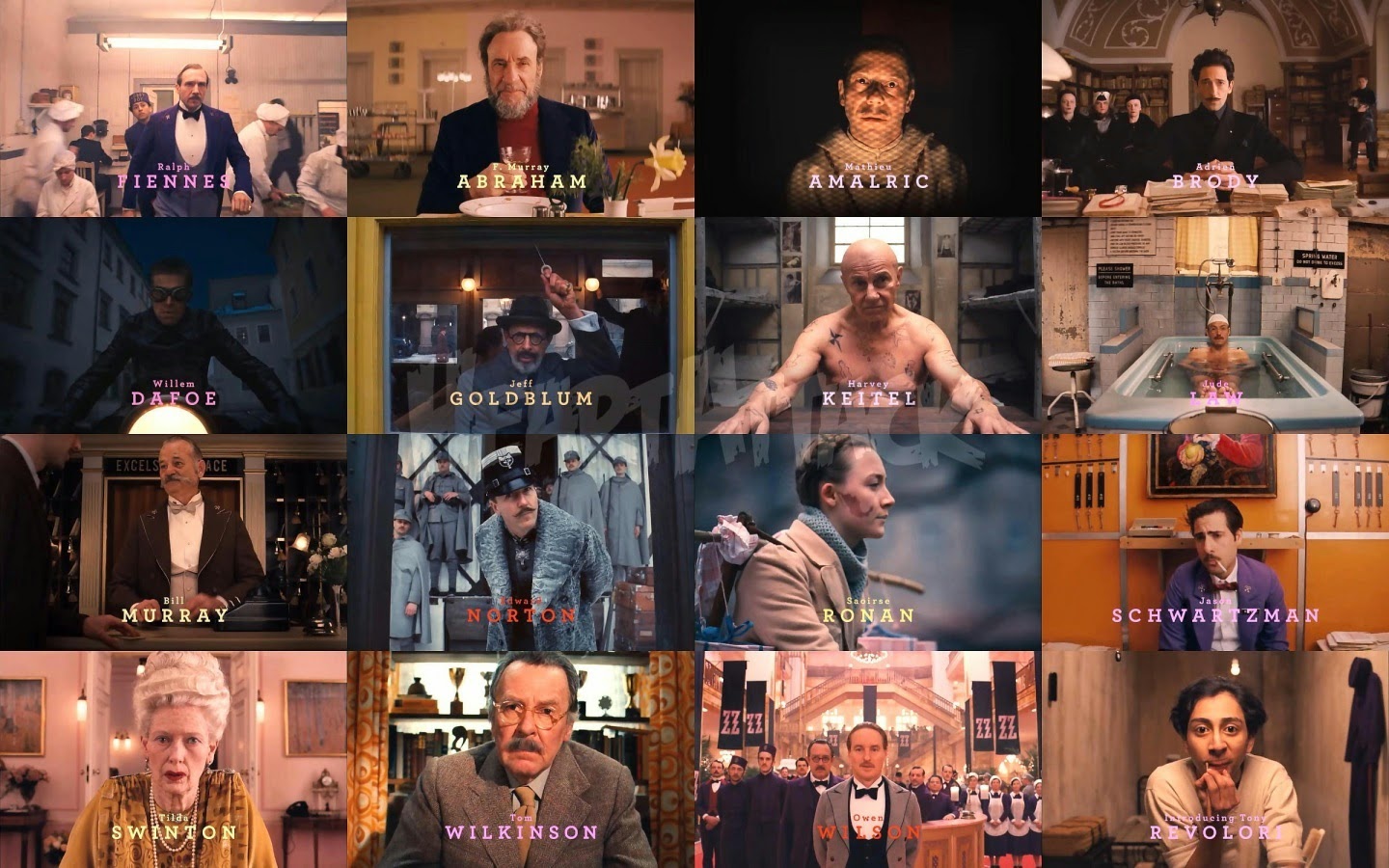 
And from Kogonada, we get a glimpse of the exquisite Anderson framing.