...one of Mary Renault's historical novels, THE MASK OF APOLLO. 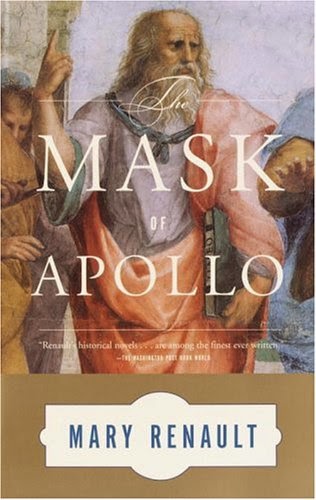 Because I am an actor, a friend of mine sent this book to me after I recently appeared in an historical stage play. She said it was about the birth of theater, but in that respect, it is really about the birth of the commodification and the business of theater, since the form of theater happened far earlier, with man primeval re-enacting adventurous or dangerous hunts by firelight as the rest of the tribe looked on. Theater can be traced back to rituals in caves.

In Renault's book, we follow Nikeratos, an actor in ancient Greece, as he navigates not only the everyday world of ancient Greece (not ancient of course but a contemporary world to him--Renault must have spent so much time researching aspects of daily life in this time and place), but also of political intrigue between city states and other countries. Our narrator might be an actor but the world of the theater becomes secondary to a larger, more encompassing story. Along the way, he meets Plato (yes, the Plato), Dion of Syracuse, and a fourteen-year old Alexander the Great.

It is a fascinating glimpse into a culture and a time past that in many ways bears little resemblance to how we live today, but in other ways, the universality and timelessness of the human condition (love, hate and all in between) are present as well. Renault makes it come alive.