...Disney's adaptation of the Sondheim musical "Into The Woods." 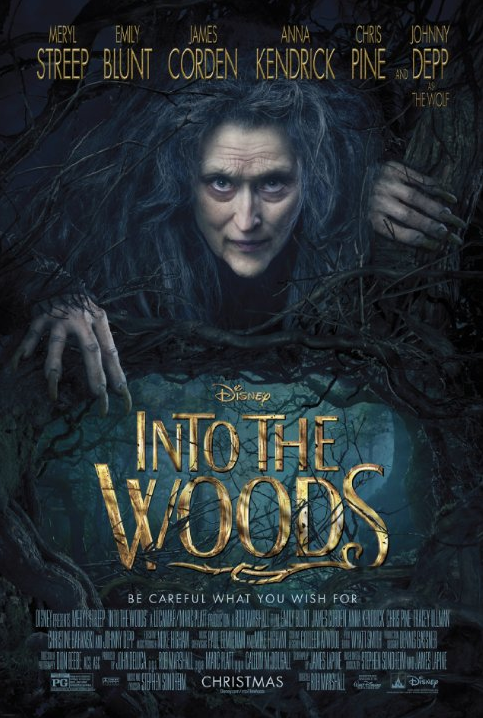 I am not a big fan of musicals. At all. I hope I never, ever hear any song from "The Music Man" or "The Sound of Music" again as long as I live, and I swear, if I ever have to sit through another production of "Oliver," someone is going to have to pay, and pay dearly. BUT, my one caveat is the work of Stephen Sondheim. His work far outshines and surpasses anything that a musical was or aspired to be previously to his "Sweeney Todd," "Sunday In The Park With George" (which won a mere PULITZER for gods' sake), and "Into The Woods."

Like so many of his works, "Into The Woods" uses a subject as a jumping off point for issues much deeper than those seen on the surface. The stage version of "Into The Woods" takes act one to tell--or re-tell in a wry fashion--fairy tales from our common cultural storehouse (although he did invent one, the story of the childless baker and his wife, and threw it into the mix). Act two is what happens after the end of the tale(s) as we know it. Much like Anne Sexton's book of re-examined and sequel-filled poems of fairy tales, TRANSFORMATIONS, act two of the show portrays the characters from the tales in a not-so-happily-ever-after situation. I mean, who would want to just marry the prince and be done with it? Wouldn't there be some kind of longing, some kind of yearning for something...something...authentic, genuine...something more personal, more alive? And what about what you sacrificed to attain your dream?

But on a deeper level, the show is about truth, perception, childhood, innocence, and above all, the lies that we tell children and the repercussions those lies can have ("Careful the things you say, children will listen"). And thankfully, Disney did not water down this sense of "Into The Woods." How could they? The songs are integral and the ultimate meaning cannot be changed without coming outright and changing the entire story itself. Meryl Streep, who can do no wrong, is just lovely as The Witch, bringing not only the proper spookiness but also a necessary poignant sadness to the role. Emily Blunt and English comedian James Corden are wonderful as The Baker and His Wife, Lilla Crawford kicks ass as Little Red Riding Hood (what a voice!), and Johnny Depp is adequate in the small role as The Wolf. Oh, and it turns out that Chris Pine is not only gorgeous but can also do comedy and sing. Alrighty then. Unfortunately, and this could just be me, Anna Kendrick as Cinderella was a tad underwhelming, and I can't put my finger on it. I perceive a certain kind of petulant, contemporary Valley Girl-ness in her and it was not suited to the role.

The visuals are fine, art direction spot on, and the music is largely in tact--a few songs are truncated and another few make their appearance as background music while characters basically talk quickly through whatever was in the song...and I understand these decisions in the interest of time.

Recommend? Oh yes, and I don't think you have to be a fan of musicals or Sondheim to enjoy it. But it helps.

http://movies.disney.com/into-the-woods/
Posted by Jeff at 11:50 PM