Alessandro Michele’s Spring Summer '16 showing at Milano Moda Uomo is his first real full collection for Gucci and is an extension of the Fall Winter 2015 collection he created as head accessories designer, right after Frida Giannini's early and sudden departure as creative director. What he showed last time was a primer for what looks to be the new paradigm for the house.

Looking like a survey of a French grandmother's wardrobe from the 1970s, the look is surely to push buttons for most men since it is so feminizing. Pussy bow blouses will be a hard sell. But my guess is that all the lace and extensive floral embroidery is not so far fetched. The motorcycle jacket in baby blue is a great cross between masculine and feminine with metal studs and embroidered flowers and bees. And classic Gucci trench coats with very 1970s cuts of a chevron pattern and patchwork leather are wonderful.

But what does it mean for a man to wear clothing that is perceived as feminine? Why is it such a taboo and why does it inspire such discomfort or outright hostility and fear in men?

This kind of gender perception is an important conversation to have since it absolutely has everything to do with the issues of homophobia and misogyny, twin symptoms that come from the same disease: the fear of appearing feminine. I am thinking of these succinct lines from the 1993 film "The Cement Garden": "Girls can wear jeans and cut their hair short, wear shirts and boots, because it's OK to be a boy, but for a boy to look like a girl is degrading, because you think that being a girl is degrading." This quote sums it all up. So, as a gay man, I do not think that being a woman is degrading as many heterosexual men do, whether consciously or not. And let me say for the record that I am personally not afraid to wear feminizing clothing since I am not afraid to appear feminine (while I have never done drag, I suffer no homophobia nor misogyny). But the unfortunate fact remains that women are still so mistreated in general, and for a man to appear to be feminine would invite the same kind of abuse and scorn that women receive in subtle and not-so-subtle ways every day.

Having said that, the kind of man--whether gay or straight--who would be interested in wearing fashion-forward designs such as these would probably be secure enough in his own sense of self not to be concerned with such matters. Gender is a context. 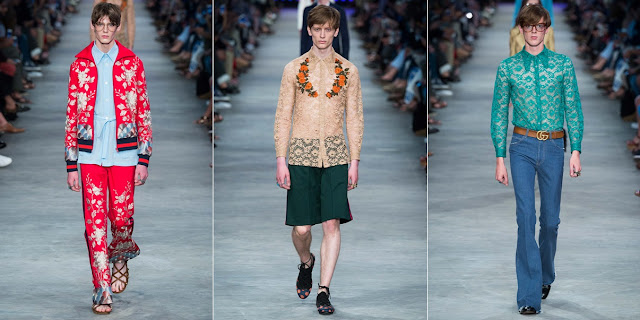 The shoes accompanying this collection are pretty amazing--I would expect nothing less from a man who was the head of accessories for the house! The metallic woven loafers in gold and red, the lace ups in various patterns, the brocaded slippers, the sparkly silver sneakers with the iconic Gucci stripe, and the minimalist slippers with metal spikes are at once harmonious with and contrasting with the sense of the collection.