J.W. Anderson's Spring Summer '16 collection just shown at London Collections: Men is a great example of why I love fashion as art. It is a very cerebral expression of a variety of oblique inspirations. I rarely copy and paste reviews from others since I like to interpret what I see for myself but over at Style.com, Tim Blanks' musings on the collection are tight and spot on:

"Jonathan Anderson's collections walk a confounding tightrope between naïveté and decadence. Much of his new menswear looked like clothes for a futuristic, spiritual retreat (Anderson himself said he wanted something "laid-back, Zen-like"), but the buckled patent shoes were purest dancehall honky-tonk. The fitted leather jackets were pretty flashy, too, especially when contrasted with multi-pleated pants in plainest calico or denim.

'He took himself seriously,' said the voice-over that launched Michel Gaubert's stirring soundtrack (a journey all in itself), but that felt like Anderson poking a little fun at his own expense—or at least anticipating reactions to his quirky rationale. He insisted his collection was actually like an imaginary world that a child might create for himself, akin to the tree houses he and his brother used to build. The preciousness that such a boy would bestow on things that are essentially valueless was reflected in the ordinary objects—keys, tools—that were transmuted into jewelry, the board game that mutated into a constructivist jacquard, and the calico or denim artfully constructed into the pants that made up the foundation of the collection. Some of the models were carrying a small metal frame on which curious little things were suspended, almost like charms to ward off who knows what.

That subtly occult tinge has become something of an Anderson signature, the way he disturbs the refined with the raw, for instance—a thin strand of bamboo or a bandage of calico nipping the waist, or a crude smear of paint across a tulle top so fine it is barely there, or even a white feather stuck to a shoulder. Such touches feel last-minute spontaneous, but also off-kilter, which is exactly where Anderson wants to keep us. But his work is now so consistent that off-kilter is proving a rather pleasant place to be."

I too find the collection to be in keeping with a certain kind of jagged minimalism Anderson has shown in the past. It is entirely intriguing and unique. But unlike the future angularity of his past collections (previously here and here), there is something so small and touching about the image of this child that Anderson invoked...it resonates with me on a personal level since I recall, being an only child, how all my toys and objects and things I found were my friends, bestowed with the preciousness Blanks mentioned since, well, something in this life has to be precious. Indeed, there is something hard to put my finger on in this collection. Despite the red patent leather shoes, the silhouettes and models have a childlike innocence. They look like little boys carrying their homemade toys. As I meditated on this collection, particularly on that cropped sweater with long arms and (for some odd reason) on the sheer shirts, I flashed on Christopher Robin, the hero of A.A. Milne's Winnie the Pooh books. Suddenly, the little red patent leather shoes make complete sense. Sorry Tim, they are not dancehall honky-tonk: they are the type of shoe a little English school boy would have worn many, many years ago. And here I seem to have cracked the collection: this is A.A. Milne's real life son, Christopher Robin Milne who, according to Milne's own autobiography THE ENCHANTED PLACES, had quite a talent for working with his hands. He owned a small tool kit, which he used to disassemble the lock on his nursery door when he was seven years old. This accounts for the little improvised tool kit carried by the models!

Even Anderson looked like a lonely little boy as he came out for his bow...as if Christopher Robin grew up to be a designer. 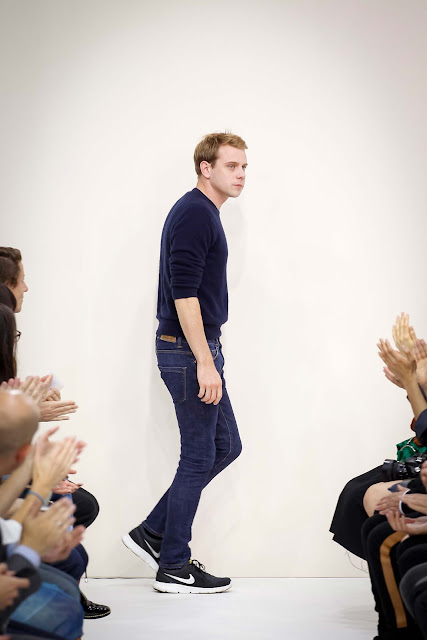 And this is the actual Christopher Robin Milne with Pooh...in little buckled shoes of what certainly was oxblood red leather. 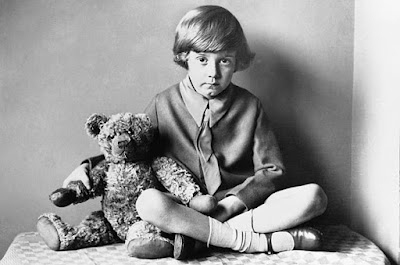 Watch the video of the complete show here, which, as Tim Blanks noted, begins with a voice over saying, "He took himself seriously..." and continues with a fascinating soundtrack of Madonna, and emotionally resonant piano and electronic music.