Rick Owens, whose aesthetic and collections are among the most recognizable in fashion, sent out a Spring Summer '16 showing at Paris Fashion Week of pieces at once familiar and new.

Familiar is the tunic, the robe, the dress that Owens has championed for nearly every season. Here they are sleeveless for spring and summer. But new is a kind of transparent leather, and silvered and colored fabrics in a unique palette he has not shown before (more on this color palette later). His inspiration was two-fold: Owens spoke of a show about male aggression which he sees embodied in the classic military M65 jacket. 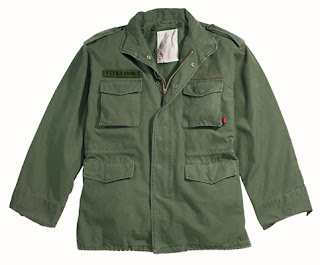 Owens proceeded to modify this staple for his collection, pairing it with open, flopping combat boots or engineer boots featuring elongated, flopping pull straps. Aggression indeed. But it seems there can be a subversive reading to this as well. “Uniforms are almost patented to make men look better and to make men look as dignified and heroic as possible, but historically when we look back at that jacket, we recognize the protest and how it became an anti-Establishment uniform, so it’s kind of great that it covers both areas at the same time: heroism and valor of military, but also the opposition to it,” Owens said.

His other inspiration was the work of the late punk nihilist (aggressive) artist Steven Parrino whose large modernist monochrome paintings were violently slashed, torn or twisted off their stretchers. Parrino used a color palette of mostly black with some punctuations of orange, red, blue, and silver. And we see exactly these twisted canvases and colors brought to life in Owens' pieces.

Here are some pieces by Steven Parrino: 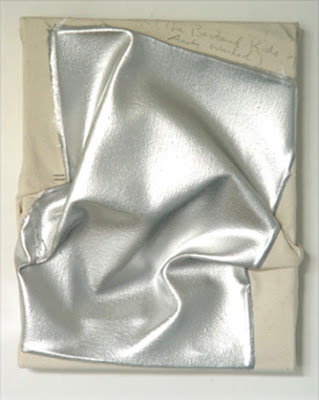 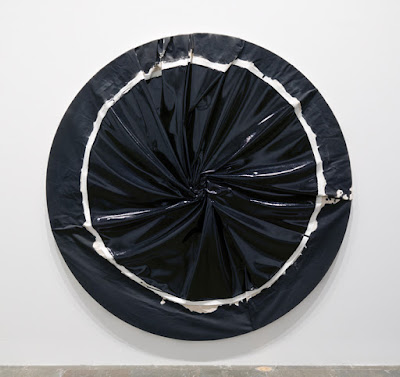 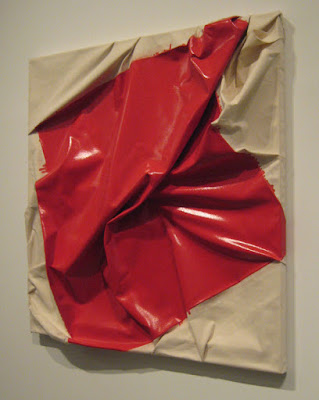 And here are Owens' versions of the field jacket and Parrino's work: 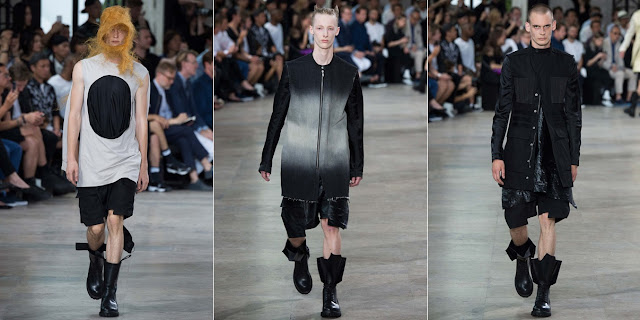 An unscripted moment erupted when a model named Jera held up a fabric swatch with a confounding political protest scrawled in a black Sharpie: "PLEASE KILL ANGELA MERKEL NOT."

“It’s a crazy, rogue, f***ing model that I punched when he came back out,” the designer told WWD after the show, adding: “Please say that I punched him.” The house issued this official statement: “Rick Owens does not claim responsibility for the act of protest by a model at the Spring Summer 2016 show. This was an independent statement and does not reflect the opinion of the house of Rick Owens.” And I believe him. Owens has carefully created a consistent, otherworldly oeuvre that is not concerned with politics or the daily doings of the world at large.

Jera has now disappeared from the roster of models on his agency's site. WHAT A SURPRISE NOT. 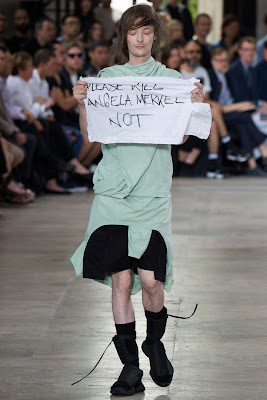