..."The Life Aquatic With Steve Zissou" written and directed by Wes Anderson in 2004. 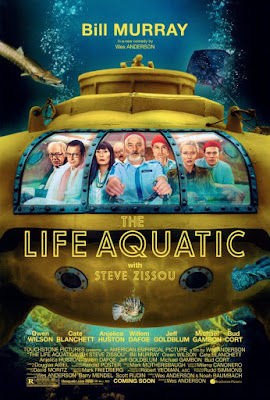 I love the films of Wes Anderson and I especially love this one. Anderson has a way of combining wry, gentle humor with a genuine sense of emotion into a wholly unique and charming package, as evidenced by films like his recent "The Grand Budapest Hotel," as well as gems "The Royal Tennenbaums," and "The Darjeeling Limited."

His stories seem to have their genesis in exactly that milieu: the story. Many have the quality of a tale or fable. When one examines "The Royal Tennenbaums" for example, one sees that a book motif runs through that film: pages of a book open on to chapters, the first few sentences of which describe the action we are about to see; and most of the characters in that film are authors, academics or playwrights. And "The Grand Budapest Hotel" owes a great deal to literature and a literary ideal as well. Indeed, it is presented as a story within a story within a story within a story.

And "The Life Aquatic With Steve Zissou" is not that different. It is generally filmed in Anderson's trademark symmetrical, wide-angle shots which lend the film a presentational tone, almost like illustrations of a children's book. The art direction, like every Anderson production is exquisite, with the locales and internal logic and look of the film creating a coherent statement that beautifully supports the film.

Loosely inspired by Jacques Cousteau and his ship The Calypso, we follow celebrity oceanographer and documentary filmmaker Steve Zissou (Bill Murray) aboard his ship The Belafonte. But Steve has figuratively run aground: his last documentary was a flop, his wife (Angelica Huston) has left him, his funding has disappeared, and his best friend and mentor was eaten by a mysterious, unseen fish that Steve swears is a new species of shark. And to this we add the sudden appearance of a grown man (Owen Wilson) who is probably his long-lost son and a reporter (Cate Blanchett) there to do a cover story for a magazine about Zissou, something which could buoy his failing career. It is a funny, bittersweet story. As part of the soundtrack, Brazilian singer Seu Jorge who plays shipmate Pelé dos Santos performs David Bowie songs in Portuguese on the acoustic guitar, and the array of wild (and fictional) sea creatures that populate the periphery of the tale is amusing and tickling.