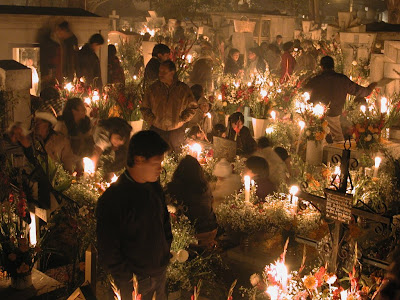 In the United States, the largest Día de los Muertos celebration is held in San Francisco. A street parade with drumming and dancing attracts thousands of people who dress up in traditional skull face paint and costumes. Nearby Garfield Park is home to many altars honoring the lives of friends and family members. Some altars invite people to participate by adding photos of lost loved ones. The video below, by David C. Hill, is a nice clip of the street parade from 2010.

For more information, visit The Marigold Project at
http://dayofthedeadsf.org/
which sponsors the procession and Garfield Park altars.
Posted by Jeff at 7:00 AM