"The Eighth Elegy" from THE DUINO ELEGIES by Rainer Maria Rilke

Started in 1912, but not completed until after the First World War, the ten ELEGIES are mournful and plaintive, like a traditional elegy. But there is also an anxiety present, a longing, a yearning, an élan toward… something. They are questioning, restless. The ELEGIES seem to be trying to find answers, searching for a truth about what is real—searching for a wider truth. They are searching for new ways of thinking and being.

The Eighth Elegy truly captures the difference between existence and EXISTENCE by exploring the perspective of an animal. Rilke shows that, as humans, we are trapped where we are because we are self-aware, we possess knowledge of time, of our beginning and our ending; almost as if thinking itself creates for us a type of prison (a very Buddhist idea, by the way). We know too much for our own good. But the animal looks out into the world and does not see “world”; instead the animal sees itself. When you are part of everything, there is no separation, no difference between “me” and “not-me.” This is what Rilke strives for: to see ourselves “in everything, healed and whole, forever.” This is a breathtaking idea.

Animals see the unobstructed
world with their whole eyes.
But our eyes, turned back upon
themselves, encircle and
seek to snare the world,
setting traps for freedom.
The faces of the beasts
show what truly IS to us:
we who up-end the infant and
force its sight to fix upon
things and shapes, not the
freedom that they occupy,
that openess which lies so deep
within the faces of the animals,
free from death!
We alone face death.
The beast, death behind and
God before, moves free through
eternity like a river running.
Never for one day do we
turn from forms to face
that place of endless purity
blooming flowers forever know.
Always a world for us, never
the nowhere minus the no:
that innocent, unguarded
space which we could breathe,
know endlessly, and never require.
A child, at times, may lose
himself within the stillness
of it, until rudely ripped away.
Or one dies and IS the place.
As death draws near,
one sees death no more, rather
looks beyond it with, perhaps,
the broader vision of the beasts.
Lovers, serving only to obstruct
one another's view of it,
approach the place with awe...
as if by accident, it appears
to each behind that precise spot
before which the other stands...
neither can slip behind the other
and so, again, the world returns.
We behold creation's face as though
reflected in a mirror
misted with our breath.
Sometimes a speechless beast
lifts its docile head
and looks right through us.
This is destiny: to be opposites,
always and only to face
one another and nothing else.

Could that surefooted beast,
approaching from a direction
different than our own, aquire
the mental knack to think as do we,
he would spin us round
and drag us with him.
But he is without end unto himself:
devoid of comprehension,
unselfscrutinized, pure
as his outgoing glance.
We see future; he sees
eternal completion.
Himself in all.

Even so, within the alert warmth
of that animal, the weight and care
of one great sadness dwells.
He is not exempt from an unclear
memory-which subdues us as well:
the notion that what we seek was once
closer and truer by far than now...
and infinitely tender.
Here... distances unending.
There... a gentle breathing.
After that first home, this one
seems windstruck and degenerate.
O bliss of the diminutive:
creature born from a particular womb
into womb perpetual.
O delight of the mite who
leaps on, embryonic, though
his wedding day impends!
All is womb to him.
But observe the lesser
certainty of the birds
who seem to know both
circumstances, by
very birthright, like
some Etruscan soul rising from
the cadaver of a sarcophagus
sculpted with its tenant's face.
Imagine the general bafflement
of anything born of the womb
and required to take flight!
Frightened by its very self, it
cuts the air with fractured arcs,
jagged as bat tracks, cracking
the porcelain sky of evening.

We are, above all, eternal spectators
looking upon, never from,
the place itself. We are the
essence of it. We construct it.
It falls apart. We reconstruct it
and fall apart ourselves.

Who formed us thus:
that always, despite
our aspirations, we wave
as though departing?
Like one lingering to look,
from a high final hill,
out over the valley he
intends to leave forever,
we spend our lives saying
goodbye. 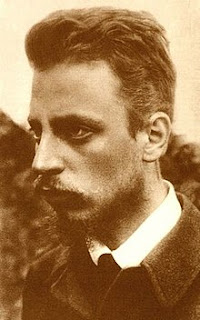