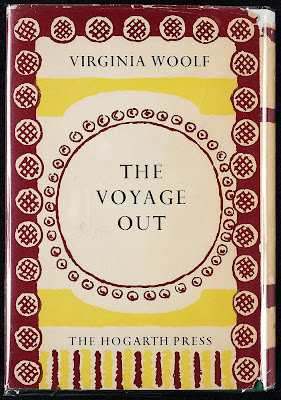 I first read Virginia Woolf in college. I took a “Women In Literature” course and we read A ROOM OF ONE’S OWN--naturally. I have since read most of her better known works; I am a great fan of TO THE LIGHTHOUSE but also enjoyed THE WAVES and MRS. DALLOWAY. Perhaps one does not “enjoy” a Woolf novel as much as one “feels” it, or better yet, one daydreams it.

So it was with some curiosity that I read Woolf’s very first novel, THE VOYAGE OUT. It contains the seeds of all the hallmarks of her work including social commentary, feminist commentary, dispassionate studies of the inner monologues of her characters, and a plot with scenes that seem to shift as if in a dream.

We begin in London with Ridley and Helen Ambrose boarding a steamer headed for South America. Judging from the title, I assumed that the book would take place on board the ship and take the form of a study of the passengers and how they interrelate—or don’t. So I was surprised to reach South America with Helen and Ridley along with their niece Rachel and a host of other characters (interestingly, the Dalloways—from the Woolf novel MRS. DALLOWAY—make a cameo appearance for a brief time as they basically hitch a ride on the steamer) relatively soon into the story. The Ambrose family takes a villa and the relationship between Rachel and her aunt Helen grows intimate and complex. Life in South America is slow and lazy and hot. And the group of other Englishmen staying at the only hotel in the little village are a fascinating cross section of Edwardian views and values, good and bad. There is a mesmerizing section where the narrator of the story takes a peek into the rooms—and psyches—of each of the hotel guests, flowing through walls, going room by room. It reminds me of the incredibly emotional center section of TO THE LIGHTHOUSE where the plot, and life itself, is seem through the eyes of the family house as it sits empty. In THE VOYAGE OUT, Woolf allows us to drift into the consciousness of these people, letting us feel who they are. We are presented with the behavior of and life views from the old, the young, the experienced, the inexperienced, the pretentious and the earnest. It’s quite a literary feat.

And Woolf miraculously allows us to slide through this thorny story without snags. The novel itself might be considered long, but I saw all the features of her writing before they became focused and sharp, whittled down to the essence of her subject. In this, her first novel, one can see her grappling with the form her later works would take, the form that has been linked to the “Modernist” school of literature.