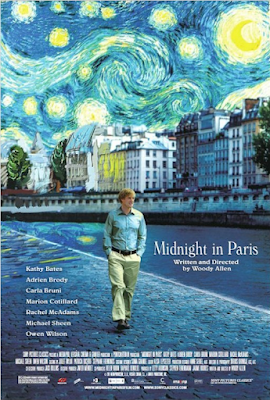 I seem to recall a time when Woody Allen publicly stated that he would not make any more films that took place or were filmed outside of Manhattan. It's a tiny little island, and thankfully Woody came to his senses because we now have the lovely little fairy tale gem of a film "Midnight In Paris" to enjoy.

Owen Wilson plays Gil, a Los Angeles screenwriter who is trying to break out of a rut and write a novel. He is on holiday in Paris with his girlfriend and her parents, but as she and they become more and more stifling and unpleasant, Gil stumbles into a very different world that takes him away from his doubt and anxiety.

This is a film that deserves to be seen as the filmmaker intended. It needs to unfold for the viewer so I will say no more about plot. It is a love letter to Paris, a fantasia, a fairy tale, and a love story...but despite this it never veers away from a sense of reality. I appreciated how the story blossomed for me, and I hope, when you see it, you will feel the same way.

I will say however, that Paris has been host to several incredibly talent-filled epochs, with a staggering amount of genius per-square-foot. "Midnight In Paris" references this fact (viewers who are familiar with this literary, artistic and musical history will be in for a treat) but the film also speaks to the ideas of nostalgia as a form of denial and that sometimes, the way forward is backward.

The film has a wonderful warm glow that was achieved by Allen's cinematographer Darius Khondji. He used some tricks (including using digital intermediate for post-production--the first time Allen has used this process) to make the film stock look as if it is tinged with yellow, like a 70s Kodachrome texture.

The cast is impressive, as Allen films usually are. But a peculiar use of talent is France's first lady Carla Bruni, on screen for a total of two or three minutes, as a Rodin museum docent.

http://www.sonyclassics.com/midnightinparis/
Posted by Jeff at 9:58 AM