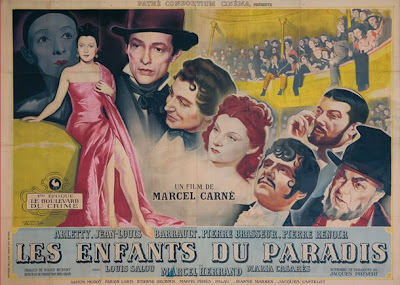 In a way, the making of this legend of world cinema is more interesting than the film itself. The plot, which mixes real people and places within a fictional story, is set in the world of the Parisian theater during the 1820s and 30s, specifically an actual theater in Paris at the time, the Théâtre des Funambules (The Theatre of the Tightrope-Walkers). The title refers to the inexpensive upper balcony area of a theater, known in English as "the gods" (so named for the humorous idea that one is sitting so far away from the stage and so high up that one might as well be "with the gods"), but known in French as "paradis," an allusion to heaven which is similar to the English meaning. Thus we refer to the common man, the average man and woman who could only afford to come to the theater if they sat in the topmost balcony. It speaks to the idea that the actors and the world of the theater are nothing without a loyal and enthusiastic audience. The theater motif is carried over into the structure of the film which is divided into Act One, "Boulevard du Crime" and Act Two, called "L'Homme Blanc," or "The Man In White." We follow a lovely young courtesan (a pretty word for a paid companion or prostitute) played by renowned French actress and singer Arletty, and the four men who pursue her, are in love with her, or are touched or altered by her in some way. Multiple story lines are woven together in a tale that feels quintessentially French to its core: operating under the concept of amour fou, all the main characters do not really love another person as much as they love the idea of love, they love falling in love and being in love. It is a romantic ideal that suffers under the weight of reality. Although the film does nothing overt to dispel the myth of amour fou, our characters are not left with much at the end of the film.

While "Les Enfants du Paradis" is a fairly unsurprising love story, the artful way it was filmed adds to its status as one of the greatest films ever made. The composition and lighting are exquisite. But here is where it gets truly interesting: the film was made during the German occupation of France during World War II. According to Wiki, the original Italian financing collapsed a few weeks after production began in Nice due to the Allied conquest of Sicily in August 1943, the set builders were short of supplies and the camera crew's film stock was rationed, many of the 1,800 extras used in the enormous and stunning crowd scenes were Resistance agents using the film as daytime cover, the film was split into two parts because the Vichy administration had imposed a maximum time limit of 90 minutes for feature films (which explains "Act One" and "Act Two"), both set designer Alexandre Trauner and film score composer Joseph Kosma were Jewish and had to hide during production (Trauner lived under an assumed name with Carné and co-script writer Jacques Prévert), and Carné and Prévert hid some of the key reels of film from the occupying German forces in hopes that the liberation of Paris would have occurred when the film was ready for release. Harrowing. All in the name of the art of film. And therefore beautiful.

Recommend? If you are a cinephile, by all means, yes.

http://www.marcel-carne.com/les-films-de-marcel-carne/1945-les-enfants-du-paradis/fiche-technique-synopsis-revue-de-presse/
Posted by Jeff at 9:00 AM