Some miscellaneous odds, ends, and observations from Milano Moda Uomo for Fall-Winter '15-'16.

Leather motorcycle pants! This January's Hundredth Monkey moment may have been these leather pants that seemed to pop up in more than a few places. Belstaff showed some superb motorcycle pants for London Collections: Men seen here, and here are some more great examples.

Tom Notte and Bart Vandebosch, a.k.a. Les Hommes, showed a slick, sleek collection punctuated with motorcycle-inspired trousers like these butter-leather beauties, channel-tufted at the knee for "protection" from road rash... 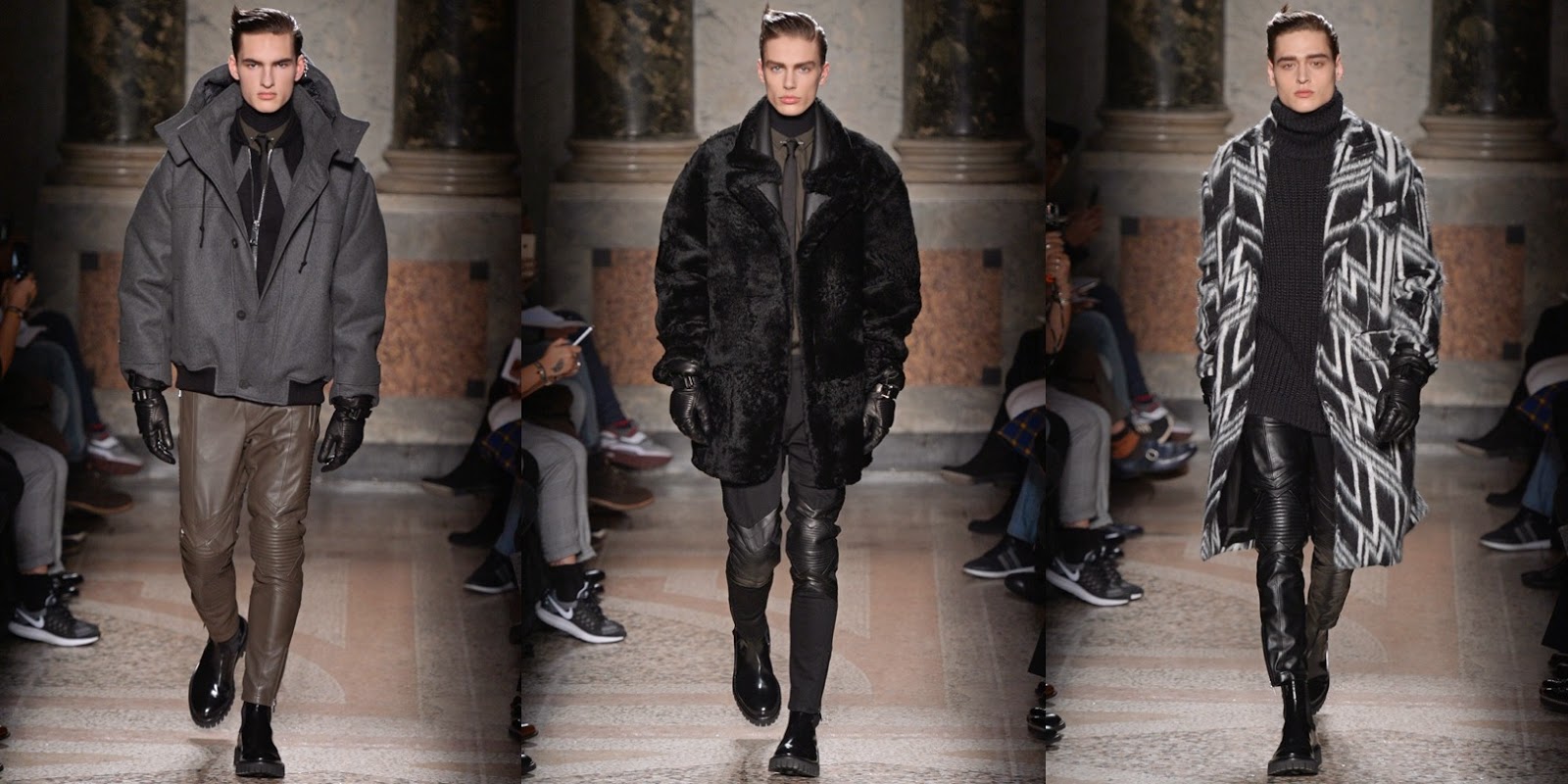 Versace showed the luxury version, mais bien sur, with some discrete patchwork at the knees. 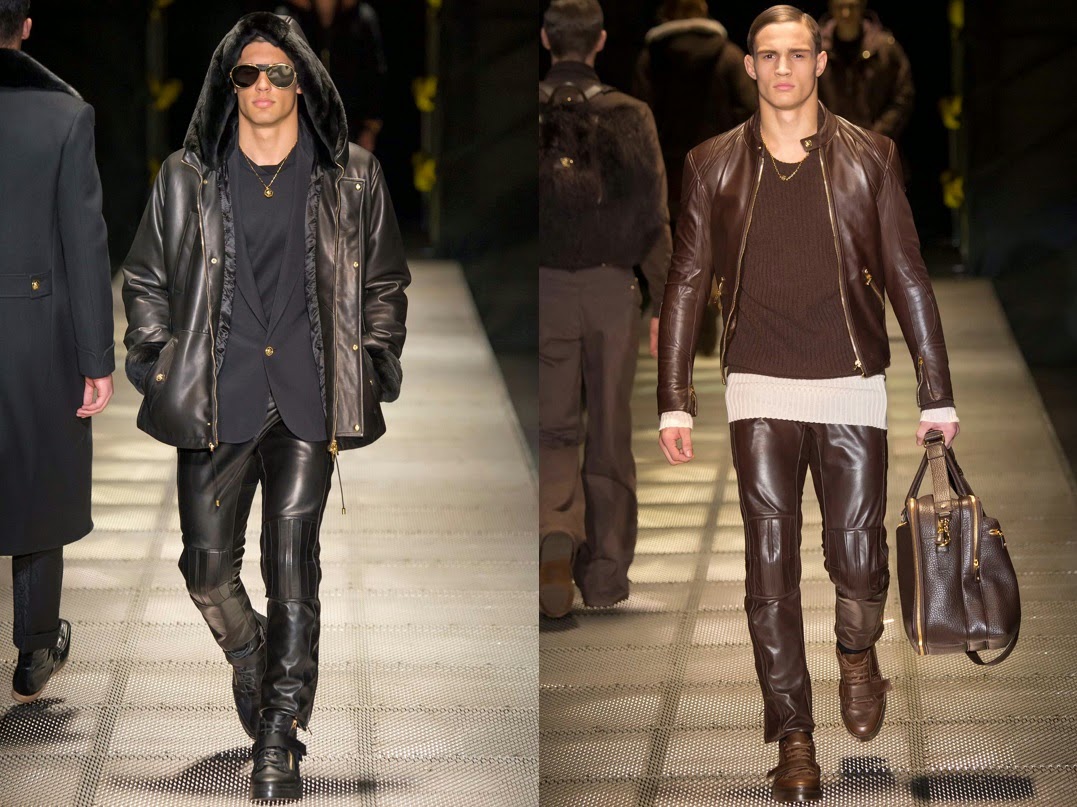 Philip Plein's actual show may have taken place in front of a gruesome, Thunderdome-type boxing ring complete with a pair duking it out, but there were motorcycle touches throughout like body armor, a giant helmet that closed the show...and these pants, whose cut is based on sweat pants, still retain the tufting that makes a motorcycle pant. 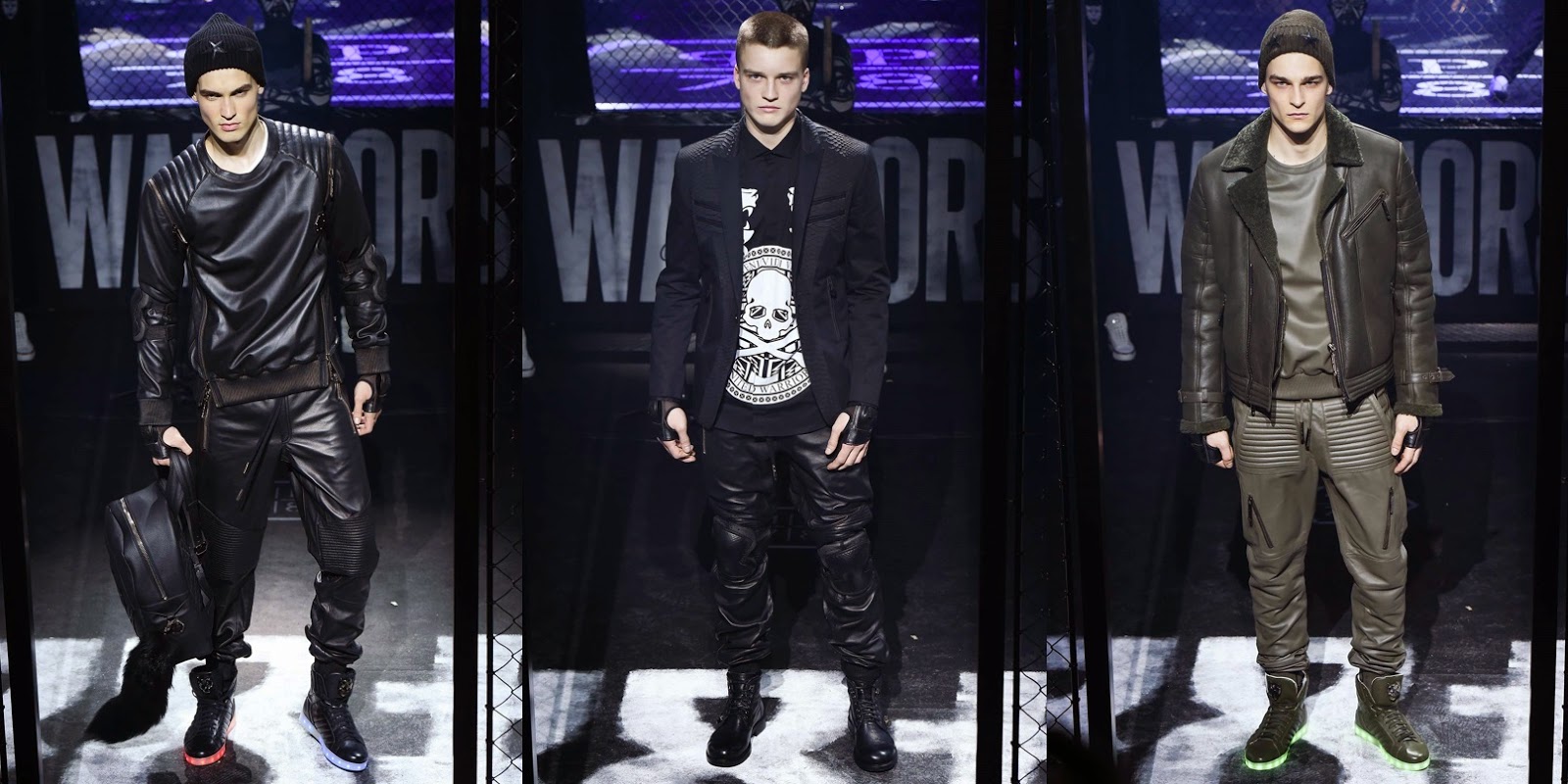 Shifting gears completely (pun intended), Gucci showed quite an interesting collection. The idea of gender was high on everyone's concept list this season at Milano Moda Uomo from Vivienne Westwood who sent out her first look for her men's wear collection on Elliott Sailors, a woman who models as a man, to Miuccia Prada who showed both Fall menswear and Pre-Fall womenswear at the same time and proclaimed in her show notes that "Gender is a context and context is often gendered." Indeed, it seems that more designers than ever showed womenswear at the same time as their men (Matthew Miller, Moschino, D Squared, Costume National, No. 21). So it was no surprise to see another house like Gucci take on this concept, but what is a surprise is how literally it manifested in this collection. Men wore what could have been women's blouses from Sears, with shorter sleeves and self-ties at the neck. Ruffles peeked out at cuffs and collars while the women strode out in more structured suits and outerwear. It was all still feminine, make no mistake. And I suspect this will be a total deal breaker for most men.

But this kind of gender perception is an important conversation to have since it absolutely does have everything to do with the issues of homophobia and misogyny, twin symptoms that come from the same disease: the fear of appearing feminine. I am thinking of these succinct lines from the 1993 film "The Cement Garden": "Girls can wear jeans and cut their hair short, wear shirts and boots, because it's OK to be a boy, but for a boy to look like a girl is degrading, because you think that being a girl is degrading." This quote sums it all up. So, as a gay man, I do not think that being a woman is degrading. And let me say for the record that I am personally not afraid to wear feminizing clothing since I am not afraid to appear feminine (while I have never done drag, I suffer no homophobia nor misogyny), but this Gucci collection could be pushing it, even for me. I am trying to pinpoint why, and all I can come up with is that the proportions and scale are wrong. I don't mind the silky fabrics (silky fabrics are nice, ya know?), the ruffles, the patterns, the lace (after all, I have a great black lace Gaultier shirt from his '96-'97 Modern Man collection) or the self-ties. I just want them to have longer sleeves and I want the short Chanel-inspired jacket to hit at the hip and not the waist. I guess what I am saying is that I don't mind wearing women's clothing but I want the pieces to FIT me. Ha!

However, there were some kind of fun classic Gucci loafers that got a sly feminizing makeover: backless and fur lined, they turned into boudoir slippers!

There was an interesting Russian-hat thread at both Emporio Armani and the more luxe Giorgio Armani. Even when they were not fur trimmed ushankas, they still felt Russian somehow. The leather feels luxe but the shape feels so Eastern. I wonder what possessed Armani to add such a detail--solidarity with the Ukraine? I love how the models for both labels sported a smokey eye--I confess a weakness for a man with a smokey eye. So sexy...

There were some super shoes at MSGM: a double monk strap shoe that came in what looked like recycled glass but it is easy to see little five-pointed stars in the mix (far left) and another iteration in croc and pony (my fave, far right). The triple strap shoe in the center feels so Westwood...