Laurie Anderson: "The Language of the Future"

Laurie Anderson is one of the 20th and 21st centuries most outstanding talents. Avant garde musician, performance artist, monologuist extraordinaire, raconteur, illustrator, filmmaker, painter, video and film artist, and composer, Anderson has been at the forefront of art performance, creating technologies (along with several instruments like the tape bow violin, the talking stick, and voice filters which she uses extensively in her work) and stunning special effects to help realize her fantastic vision on stage and off. I have seen Laurie Anderson many, many times over the years (I even saw her legendary "United States I - IV" in the early 80s) and whenever she is performing near me, I make an effort to see her (previously here and here).

We had tickets to see her when she was scheduled to perform at the new SF Jazz venue in San Francisco in April 2014, but her husband, the legendary musician Lou Reed had died only six months before. The show was postponed until this year and we got to see her last night at SF Jazz. In the intervening year, Anderson dreamed up a flexible evening of theater she is calling "The Language of the Future," a title from one of her older pieces. The evening is a collection of stories both old and new (I am resisting the temptation to call it a "Greatest Hits" concert but about half the stories she told were familiar to me), and improv music with a different musician every night. She told Robert Hurwitt at SFGate, “I’m going to be improv-ing with several of my favorite musicians. The first time I did improv was with [composer, multi-instrumentalist] John Zorn some six or seven years ago. He said, ‘Let’s do a night of improv,' and I said, ‘Well, uh, who starts? What key are we in?’ I was thinking, this sounds like a very bad idea. But once we started playing, it was thrilling. It was like building a ship and watching it sort of levitate into the air and do different things. It was really fascinating to me.” 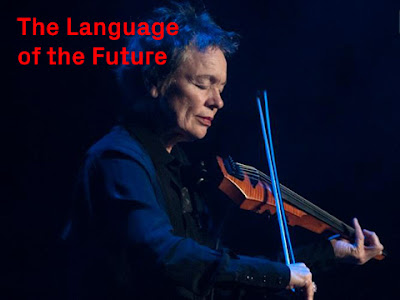 She shared the stage last night with bassist Rob Wasserman who has also played with other luminaries, among them Rickie Lee Jones, Branford Marsalis, and Elvis Costello. The two of them wove improv duets (bass and violin) around her spoken word pieces, which, as she explained at the pre-concert talk, were all centered on animals. I was pleased to revisit some of her older pieces like "Langue d'Amour" from her 1984 album "Mister Heartbreak" (an ethnic folkstory about a woman and man who live on an island but the woman falls in love with a talking snake) and the show's title track, "The Language of the Future" which was part of her "United States I - IV" performance and subsequent four-disc set. She performed a touching, poignant piece which I seem to recall from her previous performance piece called "Delusion" about her dying mother talking to animal hallucinations on the ceiling, thanking them for everything. I also really enjoyed her song "The Whale" from "The Ugly One With the Jewels," which is a story about John Lilly:

John Lilly,
the guy who says he can talk to dolphins,
said he was in an aquarium
and he was talking to a big whale
who was swimming around and around in his tank.
And the whale kept asking him questions ... telepathically.
And one of the questions
the whale kept asking was: "Do all oceans have walls?"

This is so emblematic of Anderson's style in which a piece may start light or innocently enough but unfolds to a very concentrated--sometimes devastating--point. And one of the most chilling pieces of the evening was her rendition of "The Beginning of Memory" from her 2010 release, "Homeland." The following clip was filmed a few weeks ago when she performed "The Language of the Future" at an arts festival in Argentina.

It might have been a bit of a Greatest Hits evening, but I don't care. Anderson is always hypnotizing, thought provoking, funny, wise and inspiring. No matter how many times I hear her stories. Thank you Laurie, for making life on this planet more beautiful and precious.

http://www.laurieanderson.com/
Posted by Jeff at 3:07 PM