Claire Partington's exquisite ceramic work is deceiving. At first it looks like traditional ceramic pieces from some indeterminate by-gone era but studied closely, they are intriguing narratives with interchangeable heads which are actually meant to be bottle stoppers. She explains in her Artist Statement:

"Narrative and the retelling and misinterpretation of stories is at the centre of my work. Initially concentrating on reimagining and retelling Folk and fairy stories with particularly strong imagery, then merging these stories with imagined back stories for historical figures and their associated iconic imagery.

The aesthetic inspiration is drawn largely from European Applied Art and Design styles from the 1600’s onwards. Underpinning this is the long European tradition of appropriation and reinterpretation or misinterpretation of “exotic” styles that can be seen in National Collections across Europe. I like the idea of getting it slightly wrong and the bluffing and “cobbling together” of styles that has resulted in some fantastic historical objects.

I started making sprigged vessels inspired by the salt glazed “bartmann” figurative bottles, but with the look of tin glazed earthenware from the 1600’s. This evolved into the fully figurative vessels I’m making at present, starting with the bottle shaped wide court mantua dresses of the 1700's. The figures have head “stoppers” to reflect the origin from the figurative bottle and sometimes an additional head stopper to illustrate the metamorphosis of a character.

My work has a very familiar feel to it due to the historical and literary references, even though it has it’s own very definite aesthetic. The pieces are all meticulously hand built, using traditional ceramic techniques. They are coil built, then the shape is refined before adding surface decorations of sprigged (press molded) ephemera and modern computer generated enamel decoration over the glaze."

Her Baroque Dress Edition Series is beautiful as evidenced by the following four photos. Each of the three figures is shown with all of its interchangeable heads of a human woman, a bird, and a skull. 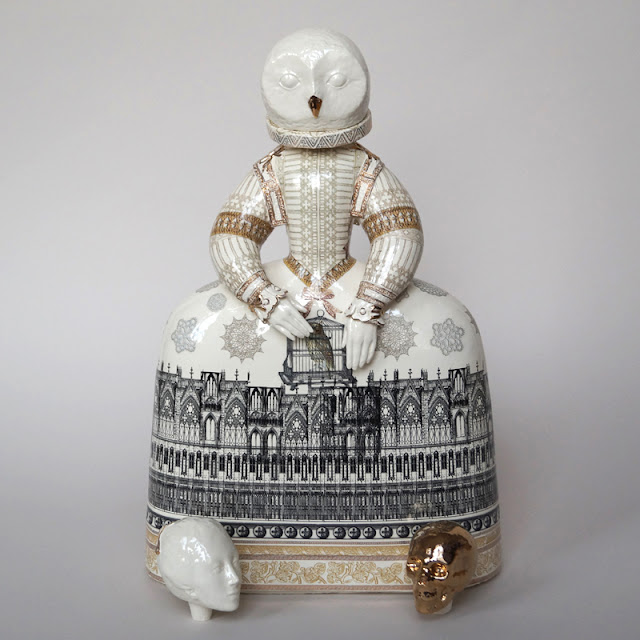 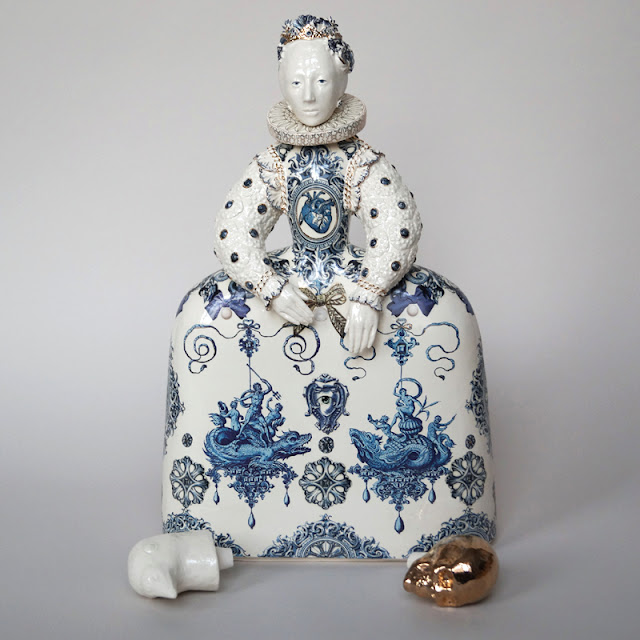 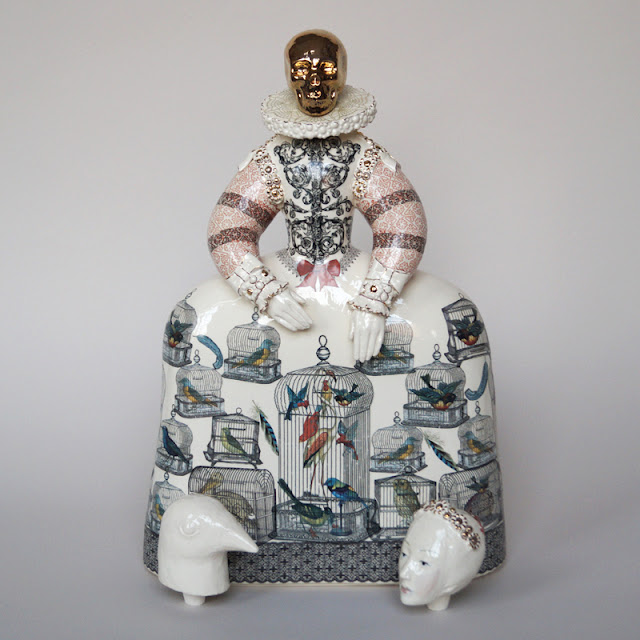 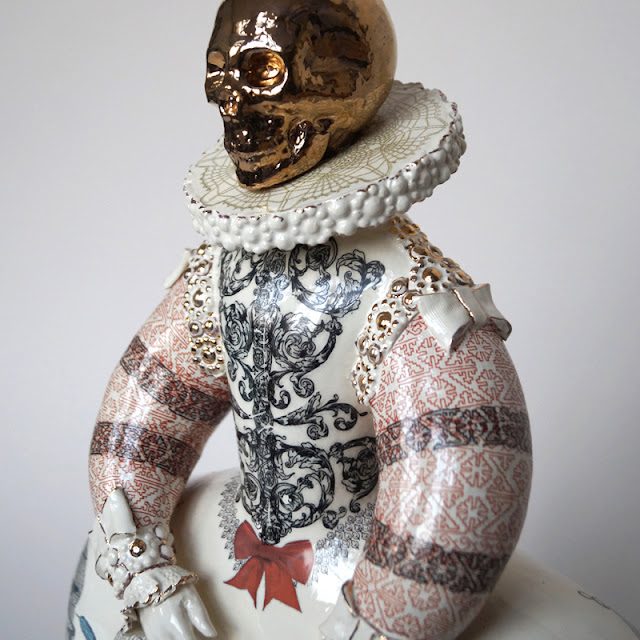 Little Woman features a figure with either a human female or cheetah head. Gorgeous! 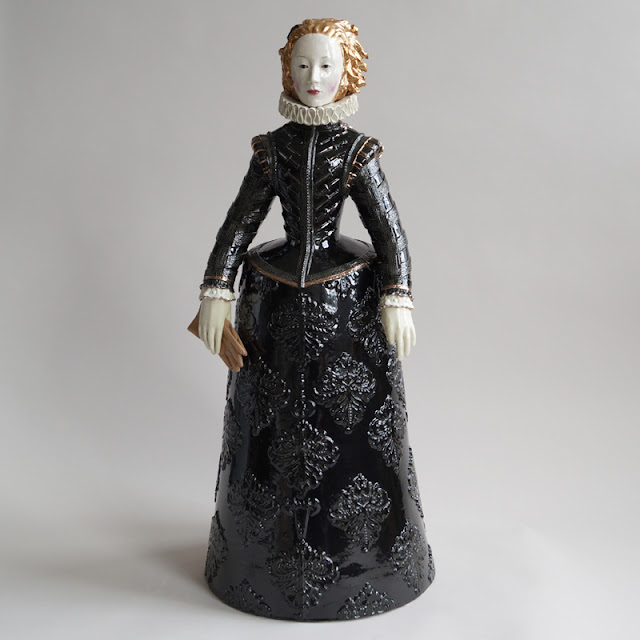 The Bear can be a man or bear, with an allegorical snake at his feet and a Nike whoosh on his chest!

The Blue Boar is lovely and reminiscent of a certain kind of middle Europe fairy tale. Partington says the piece is "based on the character of Prince Marcassin from a fairy tale by Marie-Catherine d’Aulnoy, a scandal-prone 17th-century French author."

Urraca turns a woman into a magpie who then collects bits and bobs of shiny things as seen in the close up photos below. 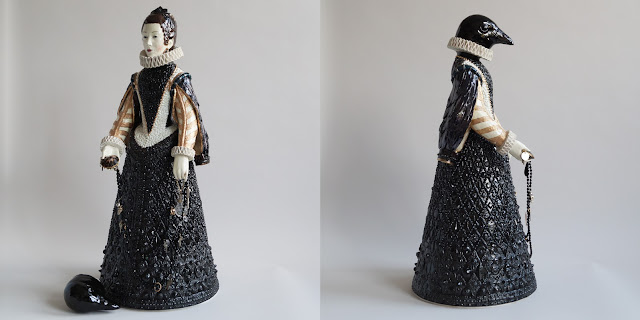 And finally, here is a three figure set inspired by a painting by the Dutch master Jan van Eyck generally known as The Arnolfini Portrait. Partington's version is called The More We Are Together: "The title is taken from a 1969 documentary about architect Eric Lyons' 'Span' housing which 'examines the benefits and dangers of the close-knit communities' generated by community housing." Indeed! Notice how both women are pregnant! 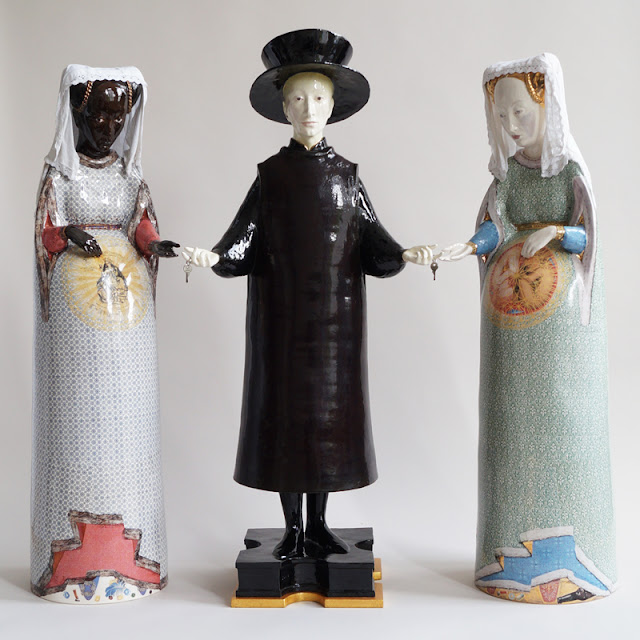 And here is the revolutionary piece by van Eyck: 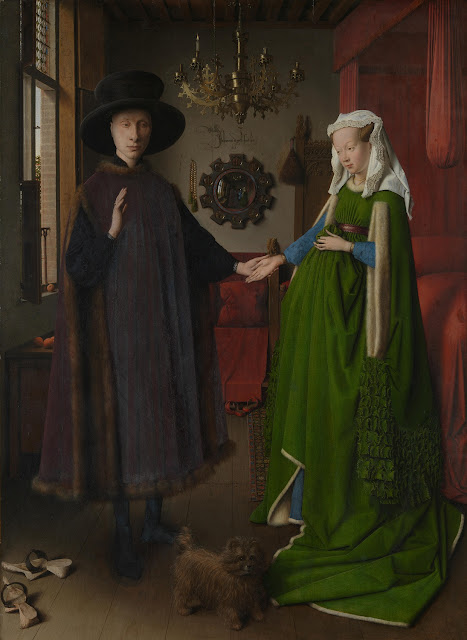 Installation view of two of her figures: 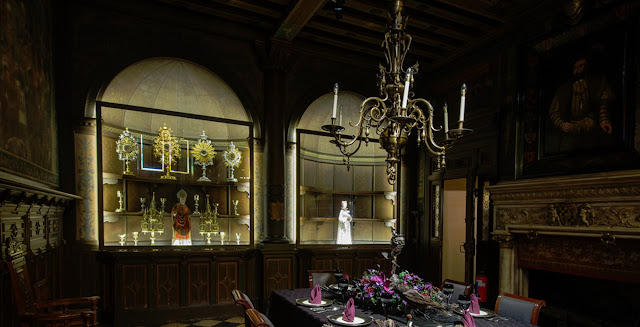 http://clairepartington.co.uk/
Posted by Jeff at 7:00 AM