We Can Rebuild It: Better, Stronger, Faster...*

A month ago today, a fire broke out at the Cathedral de Notre Dame de Paris and destroyed the central roof and the large Gothic spire.

And amazingly, within that month, the architecture and design community has proposed some fantastic ideas for the reconstruction of the church. Of course these are all works of the imagination at this point. We don't know what the reconstruction will look like. But it would be wonderful if some of the following ideas could be considered and incorporated!

French firm Studio NAB has imagined a greenhouse on the roof of the cathedral with a replacement spire that is actually an apiary! 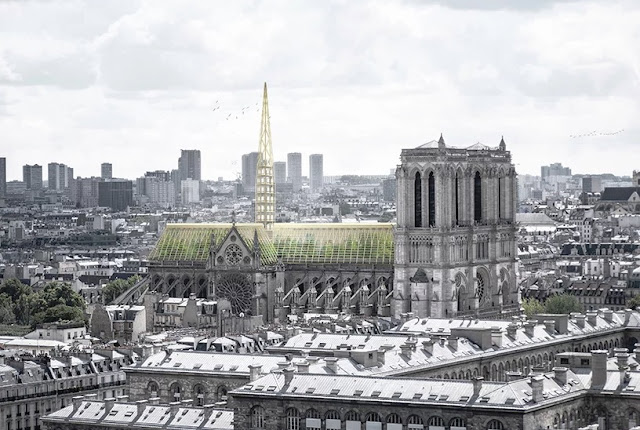 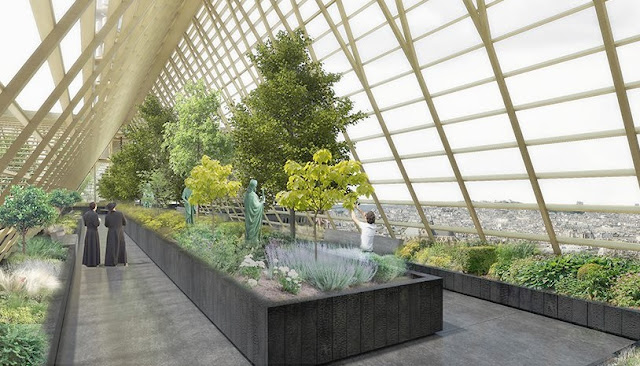 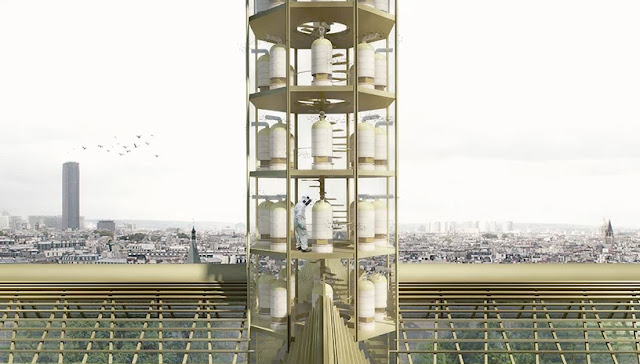 "To build a new cathedral anchored in its time, turned towards the future and representing the stakes of our time through some axes of reflection:

- The work of the earth as unifying element of the sacred and the living.
Enable the professional reintegration of the poor by learning urban agriculture, horticulture and permaculture through the creation of a greenhouse. Reconnect our children to nature and educate them through educational workshops organized within this same greenhouse.

- Bees, insatiable workers, in homage to the builders of the cathedral.
In reference to the hives that survived the fire and in order to reintroduce "living" in Paris, we could produce the famous "nectar of the gods" in the heart of the new arrow became apiary.
Here again, professional reintegration is envisaged thanks to the training of beekeepers able to produce tomorrow and on a large scale "the honey of Notre Dame de Paris".

- Make the stigmata of the fire a strength and rebuild from the ashes.
The burnt oak framework, nicknamed "the forest", will be reused to create all the planters and facilities present in the greenhouse. This is the symbol of acceptance of the course of history and the metaphorical illustration that this "forest" became burnt wood, can serve as a cradle to the new vegetation.

- Respect the original silhouette of the building and the different figures that inhabited it.
Like a royal crown, light and openwork, the arrow and the future cover are imagined in gold-tone steel structure and filled with glass panels, all respecting the initial sequencing of the roofs. The dozen statues of the original arrow will be relocated after their restoration, right in the greenhouse to watch over the latter."

A similar concept but much more grand in execution is the Palingenesis project from Vincent Callebaut Architectures. 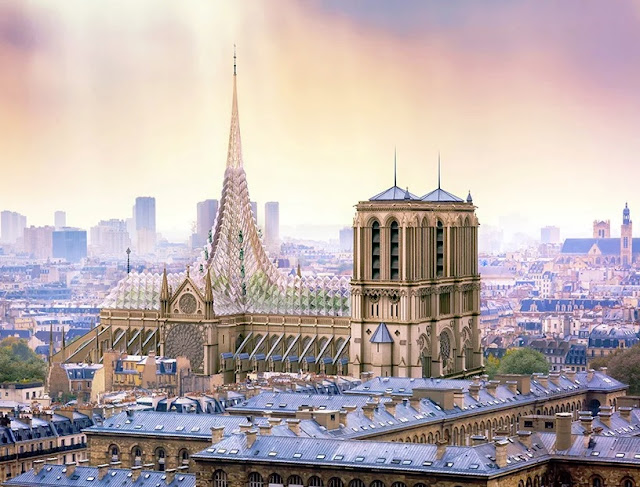 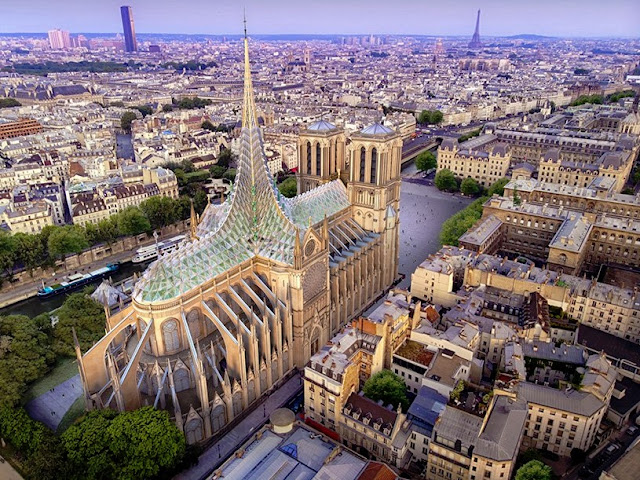 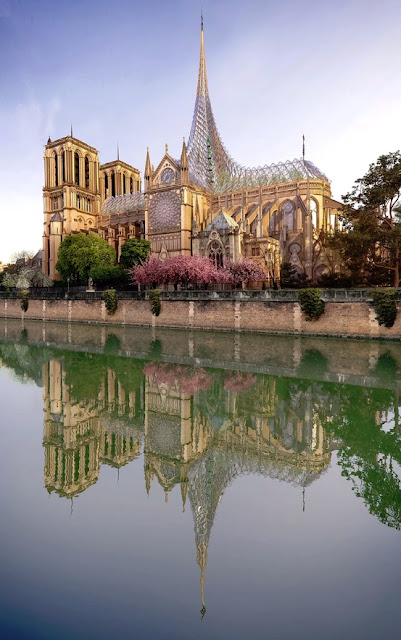 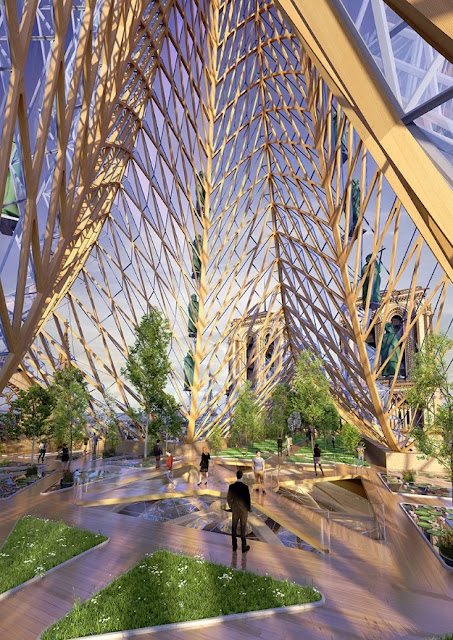 "Our Palingenesis project - in Greek παλιγγενεσία, meaning "rebirth", "regeneration" - aims to assimilate the venerable stone nave, to blend in naturally as a vegetal graft harmonizing in one gesture - in one single curved stroke of pencil - the roof and the spire.
From the four gables, the original geometry of the 10 meter-high attic has been respected. As we move towards the transept cross, its triangular section and steep, 55-degrees pitched roofs gradually stretch to shape a vertical spire. Thus, respecting the inherent principles of descent of the structural loads of the building towards the flying buttresses and the inner fasciculated pillars, the four roofing lines and the four lines of the roof's ribs bend and join together in harmony towards the sky, producing a parametric and light geometry.

The rooster located and found in the rubble the day after the disaster will crown the spire again; in this position, it should remain the "spiritual lightning rod" and protector of the faithful.

The new wooden frame is covered with a three-dimensional crystal glass dress subdivided into faceted diamond-shaped elements. These crystals consist of an organic active layer, made of carbon, hydrogen, nitrogen and oxygen, which absorbs light and transforms it into power. This energy, stored in hydrogen fuel cells, will be directly redistributed throughout the cathedral.

To avoid any greenhouse effect, these crystalline scales open at the bottom of the frame along the acroterion of the nave and transept, creating thereby a natural air flow towards the top of the spire which mimics a wind powered chimney. This natural ventilation, whose operation is akin to the interior of a termite mound, ensures excellent aeraulic performance.

At its heart, the Palingenesis project features a garden devoted to contemplation and meditation. Needless to say, this garden serves aesthetic but also nourishing purposes. Indeed, it is cultivated by volunteers and charitable associations to help the most deprived and homeless Parisians.

Aquaponics and permaculture produce up to 25 kilograms of fruit and vegetables per square meter per year. Therefore, up to 21 tons of fruits and vegetables could be harvested and directly redistributed for free each year. To that end, a farmers' market would be held every week on the forecourt of Notre-Dame.

This urban farm is arranged atop the Latin-cross plan of the roof and set in planters, which essentially redraw the layout of six-part vaults on the ground. This geometric garden "à la française" relies on a double-deck structure with light soil to grow its fruits and vegetables along the nave, from East to West, from the two towers to the apse. In the North-South axis, the roofs of the transept hosts aquaponic basins feeding plants with natural, fish fertilizers. Moreover, these water mirrors expand the place by reflecting the rose windows on the North and South side gables."

Imagine the roof of the Cathedral clad in a color the same as the sky. I love that idea, especially how it is presented here in this CAD rendering. Studio Drift in Amsterdam wants to create roof tiles made of plastic recycled from the ocean. With the help of the non-profit organization The Ocean Cleanup--nominees of THE DESIGN PRIZE 2019 for Social Impact--the material would be sourced from our seas, thus removing tons of harmful waste. 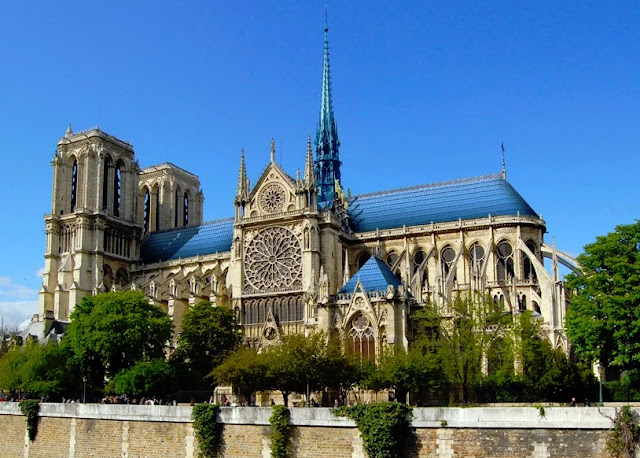 And finally, Dutch company Concr3De, which has pioneered stone 3D printing for construction, design, and research, is proposing to gather up ash, dust, and damaged stone from the disastrous fire and use the material to 3D print new elements for the roof! There is something very beautiful and poetic about the idea of taking the remains and creating beauty out of it: creation from destruction, rising from the ashes, literally.

The company explains:
"We would crush and mix the stone and ash into a fine powder, that is loaded into a large inkjet 3D printer. The printer deposits thin layers of the powder and prints an ink on top of each layer, solidifying the powder to each other. Prints are then depowdered, and can immediately be put into the building…we could start reconstruction almost immediately, without need for new expensive and hard to find materials. We also don’t need to train a large crew. The Notre Dame would be able to reopen within several months, and people would be able to participate and interact with the restoration. We wouldn’t need to discard and waste the materials that have so much history embedded inside them, and can instead reuse them for the renovation." 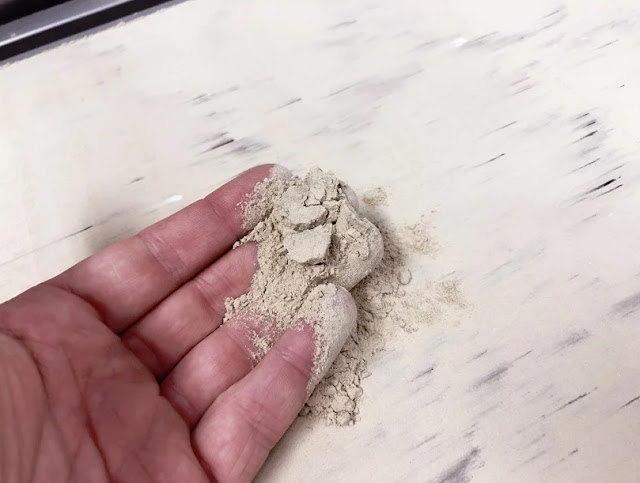 They have even 3D printed a copy of "Le Stryge," the famous gargoyle demon originally created for the roof of Notre Dame by Viollet le Duc in the 19th century, to show what the finished elements for the reconstruction might look like. 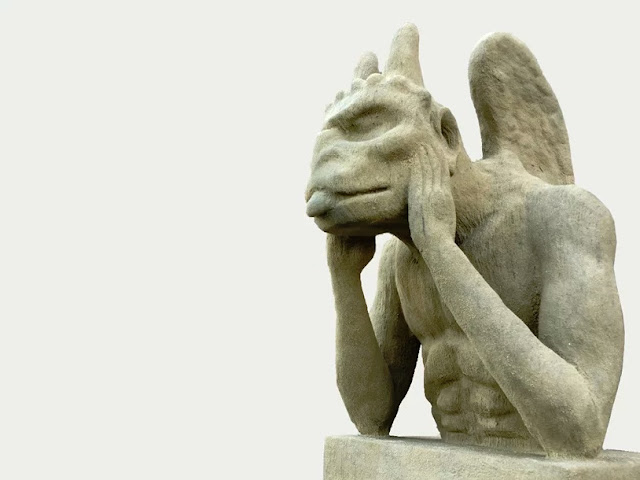