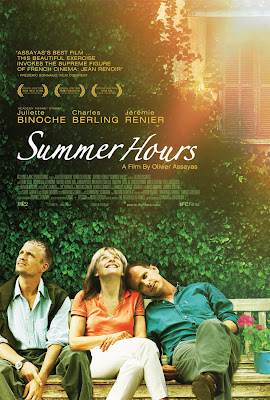 This poignant French film stars Juliette Binoche, Charles Berling and Jérémie Renier as a trio of siblings dealing with the death of the family matriarch. Full of extremely valuable art and furnishings, the home they grew up in is home no longer. Only one sibling even lives in France anymore--Binoche and Renier live in New York and Beijing, respectively. Berling wants to keep the house and its furnishings intact, but the other two see no use for it.

It's difficult to sort through a lifetime of possessions, but even more difficult when that lifetime is associated with a legendary artist. The mother's uncle was a world-renowned Impressionist painter and it seems that the whole house and its contents are somehow an expression of this fame and brilliance.

Ultimately, this film is about letting go not only of objects, but about coming to terms with the idea that you will not live on, your treasures will not be someone else's treasures, and that there will come a time when you will be forgotten. Even if the objects live on, the specific memories and stories and feelings--the intimate value--will not. Memories and stories go with us when we die. Indirectly, this is a meditation on mortality, and what lasts, and how we deal or don't deal with it. Berling watches helplessly as his family legacy falls apart and slowly dissolves, not through malice on anyone's part, but simply through time, shifting tastes, changing values, and an upcoming generation that does not assign the same meaning to the past.

Produced in conjunction with the Musée d'Orsay, the film features actual art and objects from its collection: in the story, the family own two Corot paintings which were in actuality borrowed from the d'Orsay collection for the shoot. The art and furnishings occupy such a prominent place in the story, they become characters themselves. And although these pieces are featured so prominently, the film never feels academic or pedantic; it doesn't feel like an Art History course.

Recommend? Yes. It is a lovely, sad film that moves at a patient pace.