When I was about seventeen or eighteen, I came across a book in the library by Peter Quenell CBE (1905-1993), entitled ROMANTIC ENGLAND: WRITING AND PAINTING 1717-1851. I fell in love with the subject, the book, the stories and the pictures. I was already interested in the 1980s music and fashion movement from England called New Romanticism (I was regularly decked out in knee breeches, white hose and pirate shirts). I was fascinated to find out about the original Romantics—and it explained how the current Romantics came to be called “New” Romantics. They held in high regard all the interests of the original Romantics: fantasy, dreams, costumes, beauty, a heightened sense of emotion, a reverence for the past (for the original Romantics it was the Goths… for the New Romantics, it was Victorian/ Edwardian England and the 1940s), and a fascination with exotic cultures (aside from a great interest in “Orientalism,” the original Romantics were just being exposed to vivid and unimaginable accounts of Native Americans, referred to as "The Noble Savage").

I checked Quenell’s book out of the library again and again. I pored over the contents and devoured chapters such as “Romantic Exiles,” “The Visionary Landscape,” and “Painting as Feeling.” I gazed at the illustrations and color plates of paintings and portraits. I was enchanted with the Romantic penchant for wandering around Gothic ruins of castles and abbeys—having picnics by crumbling walls, and placing benches for viewing particularly lovely vistas through the broken stones. I read again and again about wealthy, handsome and indulgent William Beckford, author of the Gothic/ Romantic novel VATHEK, who built one of the greatest private homes in history, Fonthill Abbey; and I read about the ultimate Romantic, George Gordon Lord Byron. In the winter, I checked the book out with recordings of Christmas organ music from the 1700s. I sat and listened to the somber, echoing sounds, looked at the images in the book, and imagined I was in Fonthill Abbey.
And in this way, I learned about the cultural movement of Romanticism, not only in England but in neighboring European countries as well and its impact on the written and visual arts as well as on politics and social ideas.

I often thought of going back to that library to see if I could purchase their lone copy of Quenell’s book. Then, when something called “the internet” came along, I was able to search for rare and out-of-print books… and I found a copy of ROMANTIC ENGLAND for my very own. It is one of my most treasured books. All the images below are from my copy. 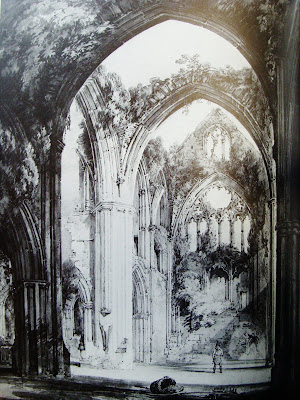 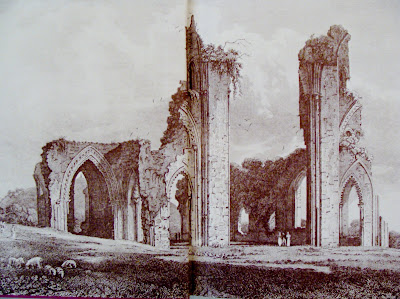 Strolling amongst the ruins 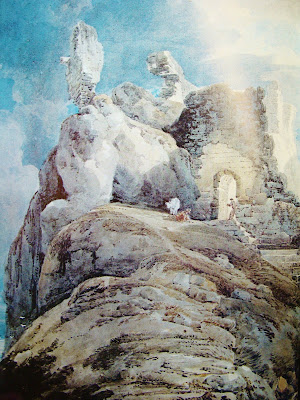 The Rocking Stone by John Girtin 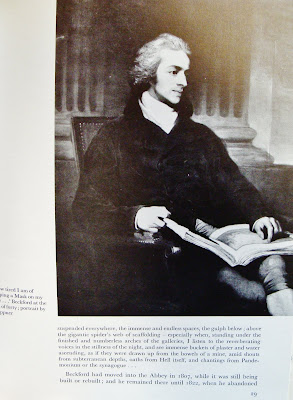 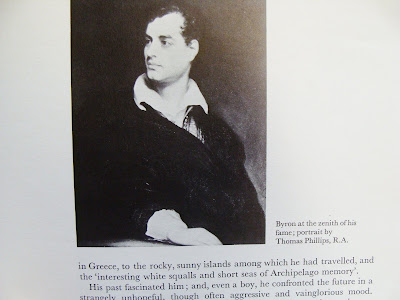