One can always count on Walter Van Beirendonck to deliver a collection that clearly pushes the concept of fashion into art. I have said in the past that Van Beirendonck's work seems like the product of an an art-school studio experiment... as if he had been able to raid a huge supply room and use all the clay, paint, fabric, and bits and bobs stored there. There is a fearless sort of freedom with what he does season after season. His concepts are always engaging, puzzling, sometimes disturbing, and expansively liberating. The concepts seem to soar up and around like wild birds, or lightning. One never knows from what direction it's all going to come. Ideas assemble themselves in astonishing ways in his mind.

And his Fall-Winter '14-'15 collection at Paris Fashion Week shows his powerful imagination at work, and it is also an example of why I find the world of haute couture so compelling. Clothing at this level truly is performance art and sculpture. And what Van Beirendonck is saying with this collection is, as usual, layered, oblique, and full of references and inferences: the name he gave this collection is "Crossed Crocodiles Growl." In Ghana, the symbol of conjoined crocodiles speaks to the idea of "unity in diversity" or in more practical terms, the inherent difficulties of reconciling individual and group interests in a democratic system. But the growling part... well, that is pure Van Beirendonck. The crocodiles are not going to put up with it any longer and their stylized teeth played across footwear, pullovers, and lycra leggings. Towering feathered headdresses reminiscent of head gear worn by certain native groups in rain forests were painted with the slogan "STOP RACISM." The designs of the collection may have refelcted native cultures across Africa and even in South American jungles (Amazonian feathered or furred jackets and shorts, Guatemalan patterns, and Masai blankets and jewelry ), but Van Beirendonck said of racism, "It's a problem everywhere, in Russia particularly." Hence the military helmets...

The sense of the collection is a blending of native and European styles. But does it speak to colonialism or a brighter, more optimistic approach of unity, a kind of "we-are-all-one" idea...? I like to think it is the latter since Van Beirendonck has been crafting his own native style and symbolism for many years now, albeit in a modern, graphic, highly individual way. He is, I can say confidently, a force of unity.

A side note: I like the humorous sweater woven with his face which uses long strands of yarn for his beard! Hey, even Hitchcock made a cameo in every film he made... 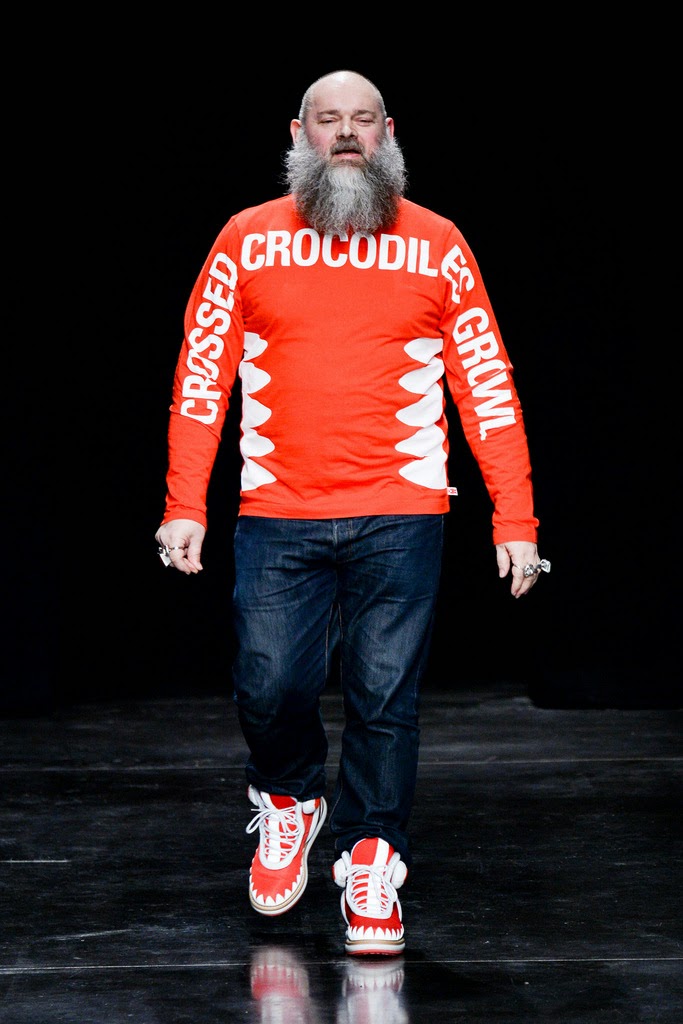 http://www.waltervanbeirendonck.com/
Posted by Jeff at 11:00 PM