Well, it's that time of the year again when designers send their creations, sprung from their fever dreams, down the runways. We start the season with London Collections: Men, then move on to the trade show at the Fortezza da Basso in Florence called Pitti Uomo. This is followed, as usual, by Milano Moda Uomo and finally Paris Fashion Week.

Although the British Men's Fashion Week called London Collections: Men is only a few years old, it is now host to prestigious houses and designers, showing not only traditional English tailoring and Savile Row suits but wild, youthful, artistic creations as well. It wrapped up its three day run yesterday with some interesting collections for Spring/Summer 2015.

As with any Fashion Week, it is always interesting to see similar ideas pop up from designer to designer, completely independent of one another, and how each handles the execution of that idea. I call it The Hundredth Monkey Effect. And for this showing of Spring/Summer shows, a few themes stuck out for me. First is a silhouette from Japan that includes kimonos, pieces that look as if they would belong on a samurai warrior, and wrapped tunics reminiscent of Japanese Buddhist monks.

Astrid Andersen, whose collections are simply never very interesting to me, showed her usual, tired American basketball-inspired collection but added some flavor with a flowing kimono and the idea of a kesho-mawashi, a type of apron-like garment that sumo wrestlers wear when they enter the ring, all in candy-sunset colors.

AGI & SAM's mop-topped models did not so much walk as float in Zen-like tunics in a limited color palette of white, gold, and blues in navy and cobalt.

According to Tim Blanks at Style.com, Craig Green was the standout collection of the entire week. Green had been designing under the auspices of MAN but this collection marks his solo debut. And according to many who were in the audience, there were tears, gasps, and thunderous applause. Green calls this collection a "silent protest" with barefoot models in flowing creations. White, black, and a lovely kind of cornflower blue helped maintain a sense of spiritual purity. The garments themselves look like padding that a samurai warrior would wear beneath his armor. But here, in this very subtle anti-war protest, the trappings of war are loosened, the ties flapping and fluttering. The battle uniform is coming off. 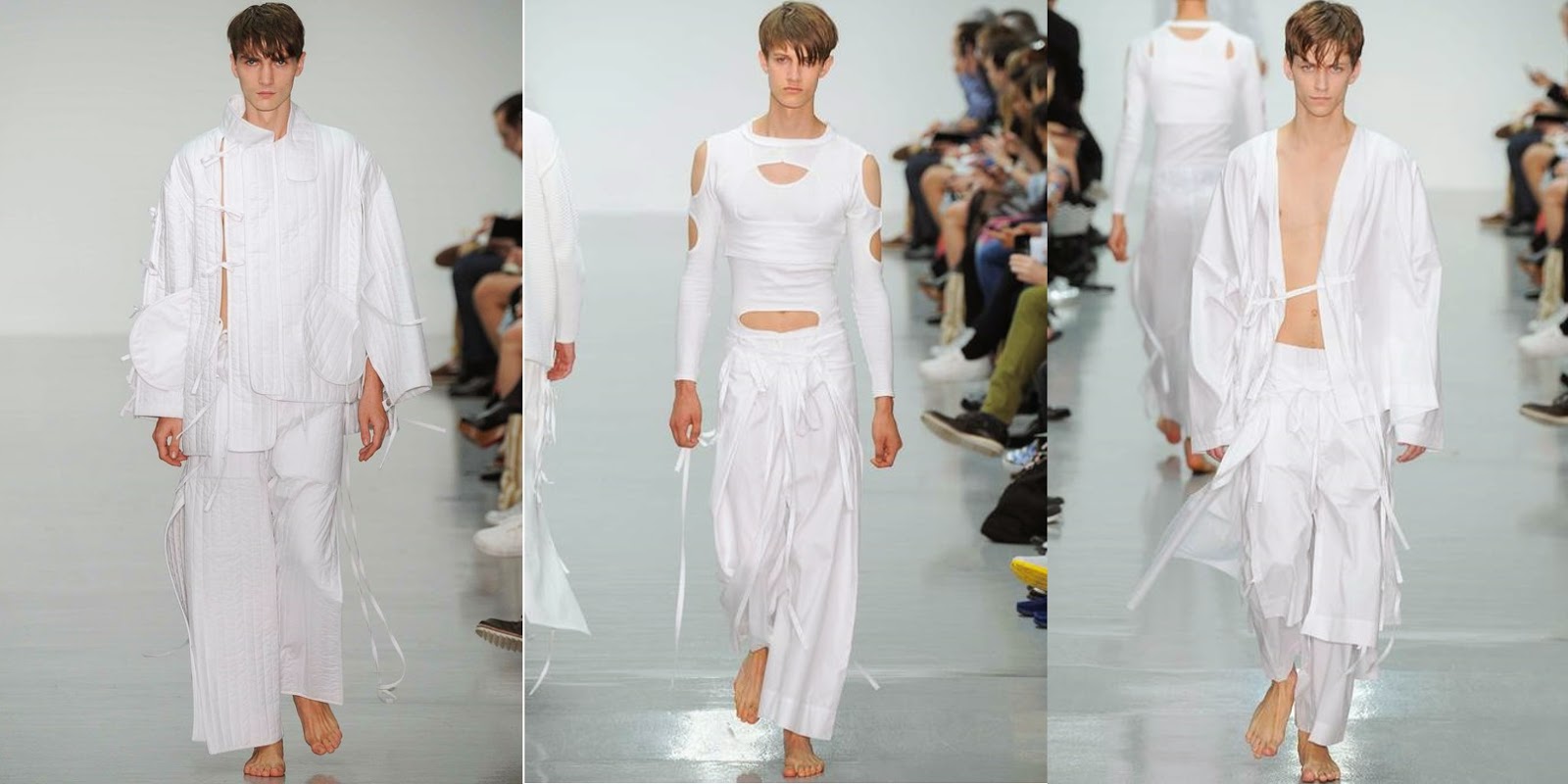 The second idea that rose like cream to the top was pinstripes, which seems an unlikely motif for any Spring/Summer collection, yet... there we have it. Pinstripes were everywhere a kimono wasn't... even if the lines of said pinstripes did not, strictly speaking, line up. 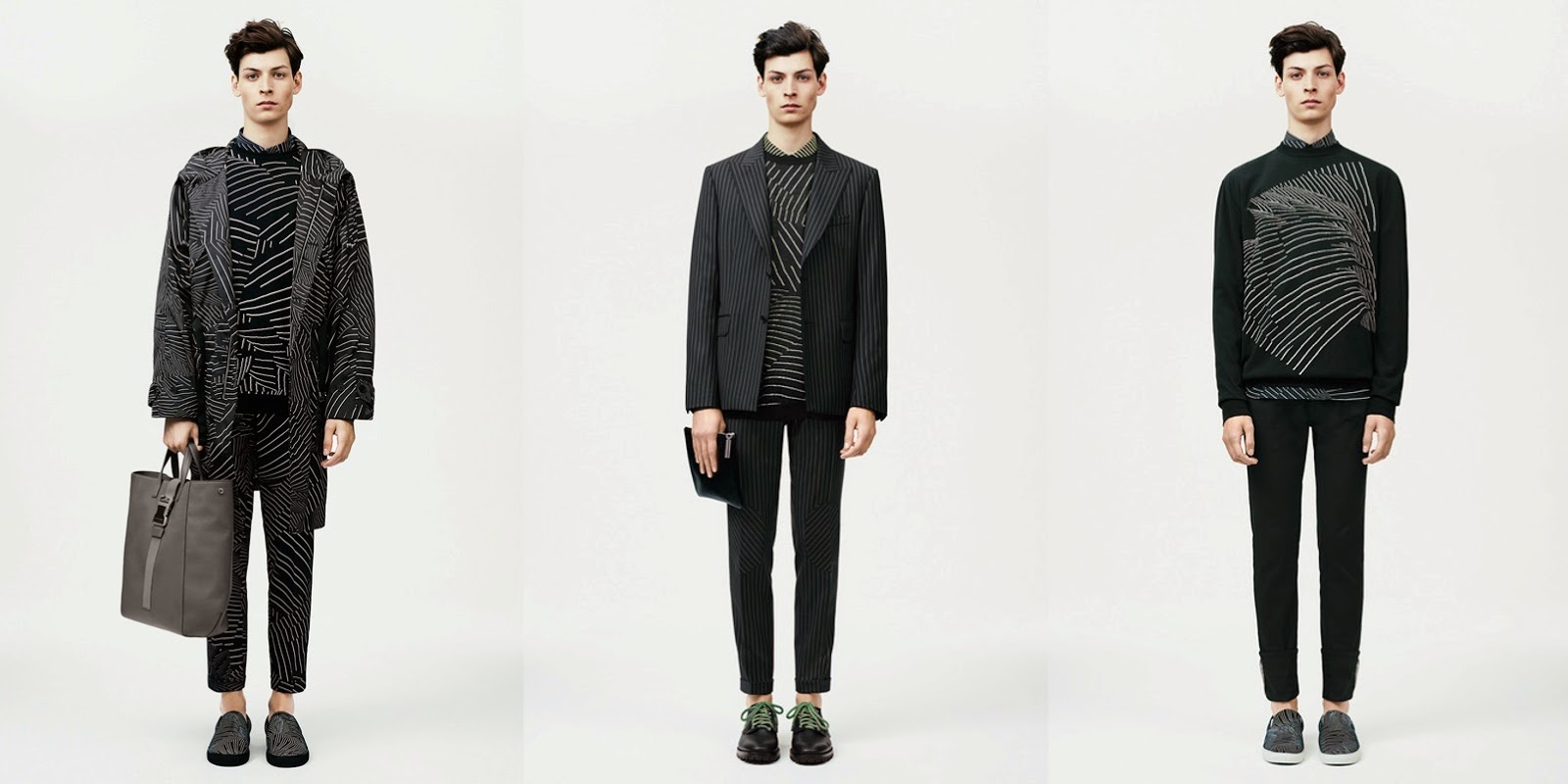 I like the randomly placed zippers on coats and shirts at Casely-Hayford. They feel a little... ahem... "New Wave." The zippers reinforce the verticality of the pinstripes.

For his pinstriped theme, Patrick Grant at E. Tautz evoked English seaside towns where the British Mods of the 60s (look at the Mod hair styling on the models) would gather to show off their scooters and fight rival gangs. The stripes here were presented in a larger scale to echo beach awnings and deck chairs at places like the Brighton Pier but classic smaller pinstripes were the base on shorts and trousers. And what would a reference to Mods be without the classic Mod fishtail parka... 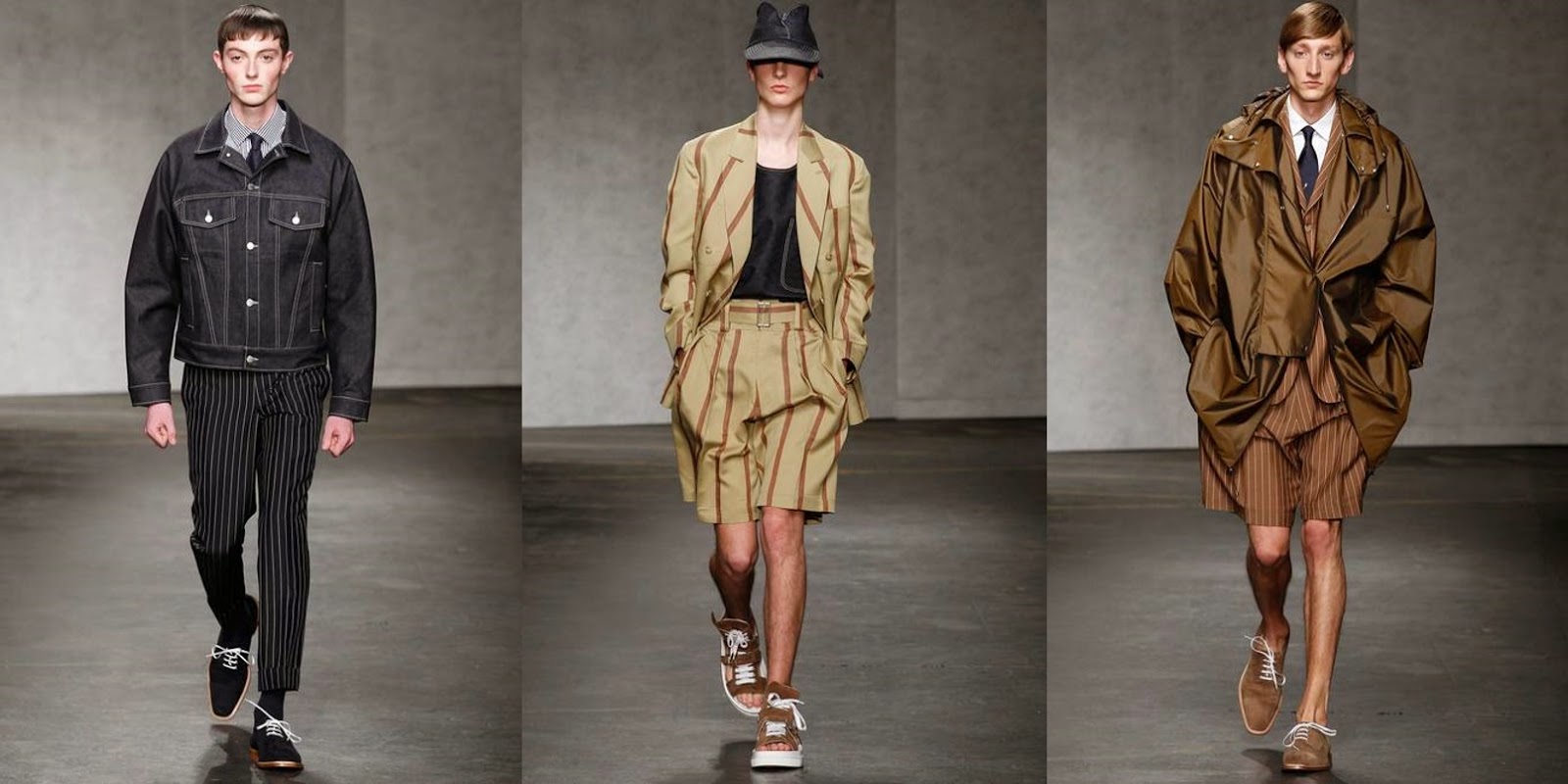 And finally Matthew Miller's show was a strong political statement. Where Craig Green's protest was "silent" and referenced peace and purity, Miller's pieces were much more direct, peppered with the words YOU, ANTI-, WAR, and SOCIETY. His pinstripes referenced the standard issue, one-size-fits-all pinstripe suit that was given to British soldiers returning to civilian life after the Second World War in order for them to assimilate. But like every soldier returning from a war, the suit only served as a reminder of how they can never relate or rid themselves of their experiences. Pieces of said charity suit were cut up and appliquéd in random patches but this effect was especially noticeable on shoes. Miller called his deliberate anti-war statement "Introversion." Wrist and neck corsages remind me of the famous image of a young protester placing a daisy in the barrel of the rifle of a policeman. 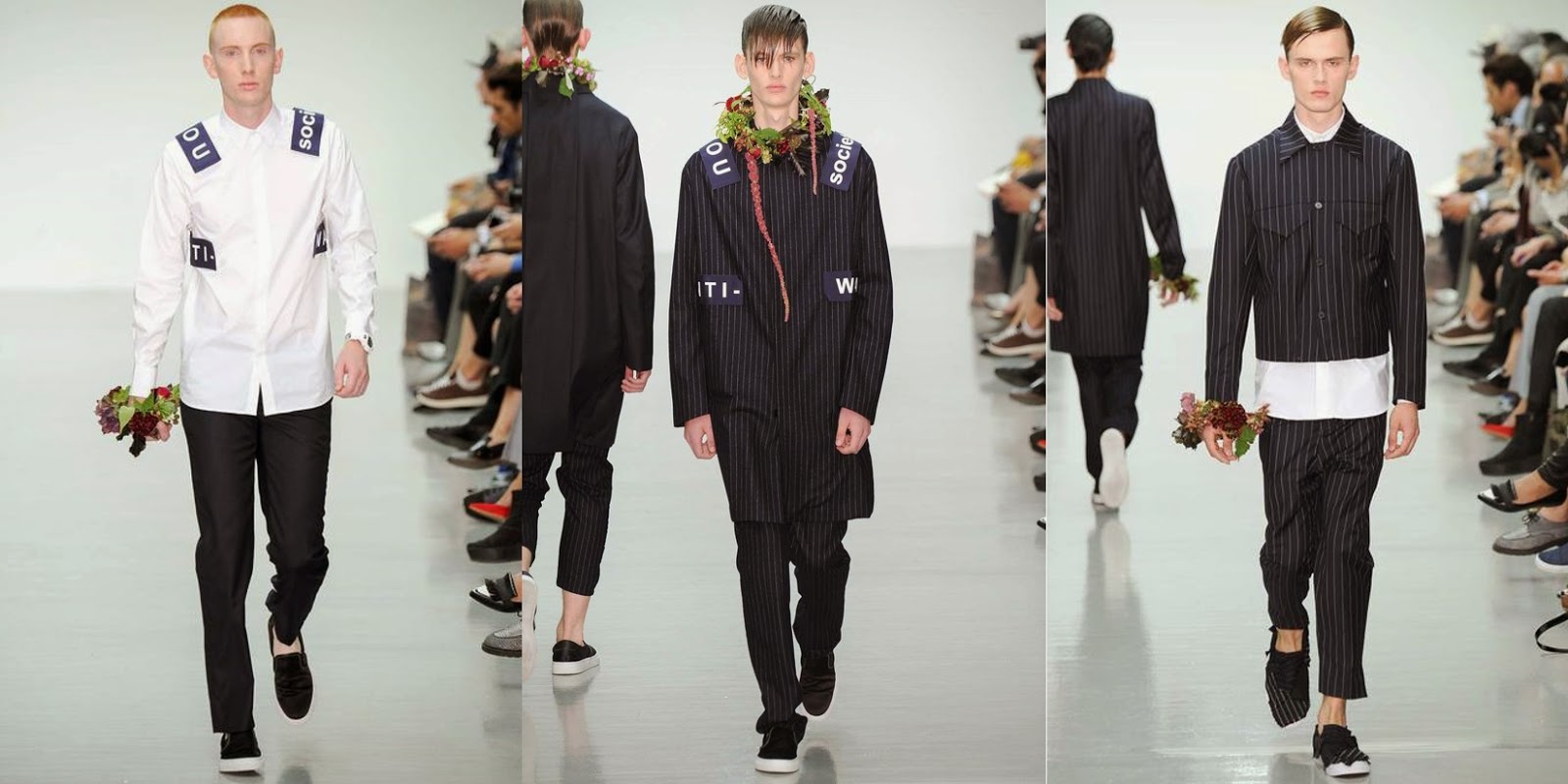 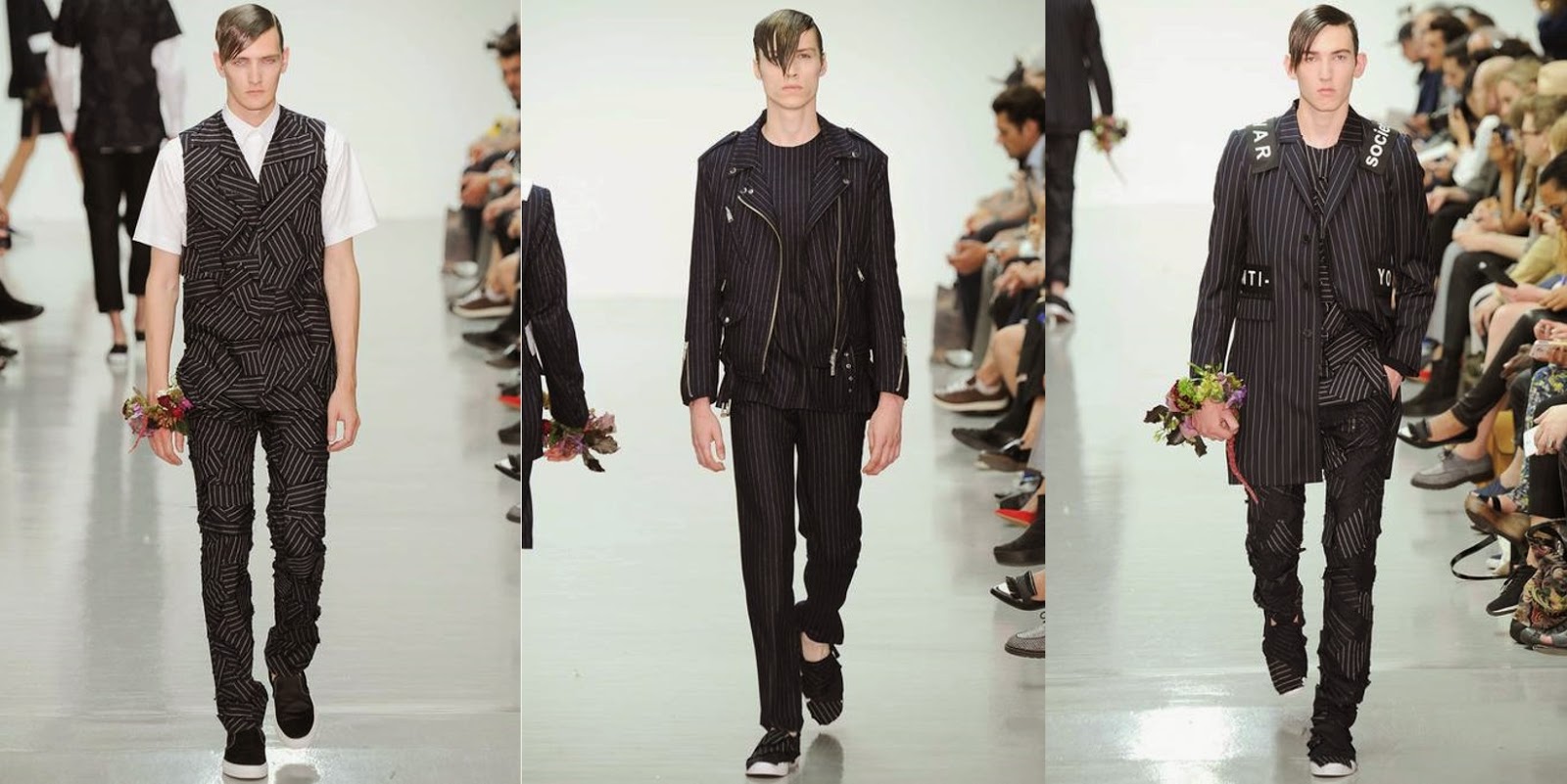 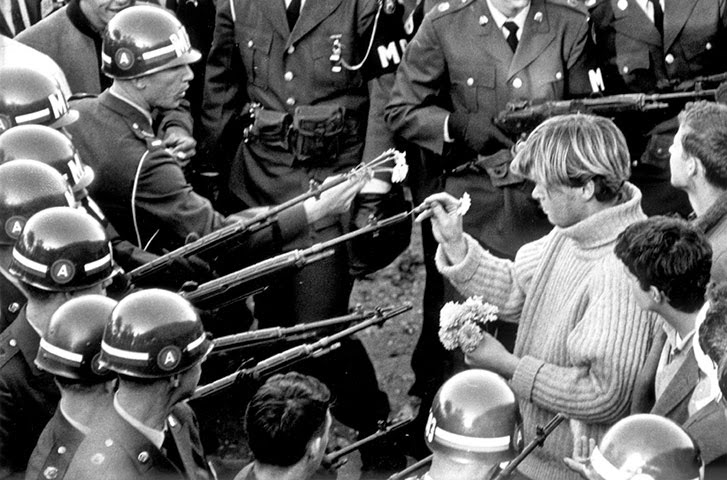 Above: a young man places a daisy in the barrel of a gun held by an MP
blocking the Pentagon at the anti-war March on Washington, April 17, 1965.
Photograph: The Washington Post/Getty Images
http://astridandersen.com/
http://agiandsam.com/
http://craig-green.com/
https://www.kering.com/en/brands/luxury/christopher-kane
http://casely-hayford.com/
http://www.etautz.com/
http://www.matthewmillermenswear.com/
Posted by Jeff at 11:59 PM