Despite the fact that father and son design superstars Joe and Charlie Casely-Hayford were listening to two different genres of music while creating this SS '17 collection shown at London Collections: Men, the pieces hang together nicely. Father Joe was listening to classic 20th century rock and son Charlie listened to 21st century grime. But what emerges here in the collection is, like the Craig Green collection from yesterday (seen here) and to a lesser degree the Astrid Anderson collection, a sense of the Indian Subcontinent in the marvelous exotic silver necklaces and sumptuous yet simple paisley jacquards developed with the 276-year-old silk weaving mill Vanners. Perhaps this specific kind of ethnic motif will be this season's Hundredth Monkey moment. 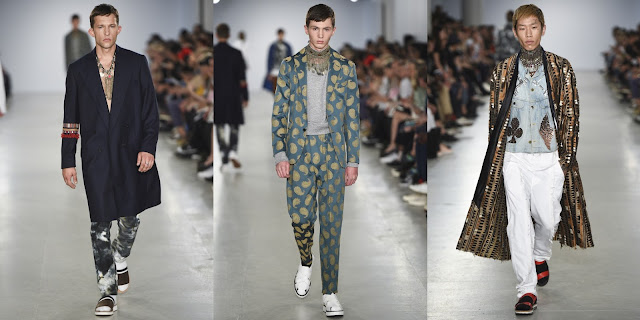 http://casely-hayford.com/home/
Posted by Jeff at 7:00 AM