Since Alessandro Michele took over as Creative Director at Gucci in January 2015, he turned the steering wheel of the house in a totally new and shocking direction. Despite the fact that he has worked for Gucci since 2002, hired by Tom Ford and then later serving as assistant to former Creative Director Frida Giannini, he broke with the aesthetic lineage of the house which was a kind of louche, 70s, jet-set, Studio 54 sort of luxury: sleek, sexual, yet based on tradition. One wonders if Michele had been planning his stylistic 180 the whole time. What on earth possessed him to dump the cocaine/private jet/Paris-New York vibe for an arty, loose, bohemian, gender-bending look with frilly collars, pussy bow blouses, and three-quarter length sleeves for men? His collections still reference the 70s so there is that. He has said, "The ’70s is the most powerful image, for me, for the brand," but whose 70s...which 70s?

Michele's previous FW '16-'17 collection was shown in a space completely wrapped in crimson, somehow a fitting color for a fall-winter collection. So for his Spring-Summer '17 collection just shown at Milano Moda Uomo, the show space was drenched in emerald green, which feels like an equally fitting color: a saturated, rich, jewel tone for a saturated, ornate collection. While Michele cited the 13th-century travelogue of Marco Polo, IL MILIONE as a reference for this collection, we have seen his penchant for Chinoiserie in other collections. But Marco Polo creeps into SS '17 with references to the ocean and sea travel. Witness prints based on Renaissance depictions of sea creatures and underwater animals (which brings to mind this SS '16 McQueen collection, previously here) along with sailor touches like the white and blue striped nautical shirt, and takes on the classic Greek fisherman cap and the French sailor cap.

The 70s were present in other Alessandro Michele collections, not only with color, style, and silhouette but with the inclusion of cartoon characters like Snoopy and Woodstock from "The Peanuts," previously seen here. For this collection, Michele incongruously incorporated Donald Duck into his lush Asian brocades (see him peeking out from rural Chinese landscapes or sharing shoulder space with a dragon), embroidered on evening jackets, and coupled with a lobster on loafers.

Shoes. Amazing.
Here is the aforementioned lobster/Donald Duck loafer, along with a fantastic Greek-style sandal whose sole is in the shape of a fish. Sequined appliqués of snakes and tiger heads look marvelous on silk and velvet slippers. And of course I love the studded t-strap sandals in plastic jelly and red, white, and blue leather. 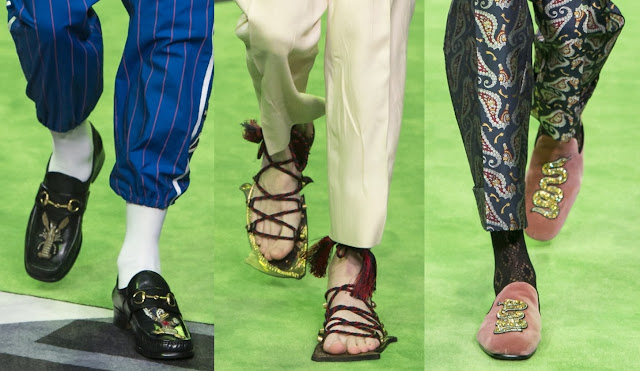 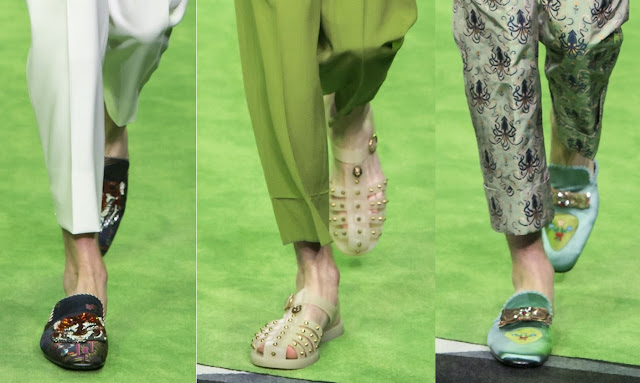 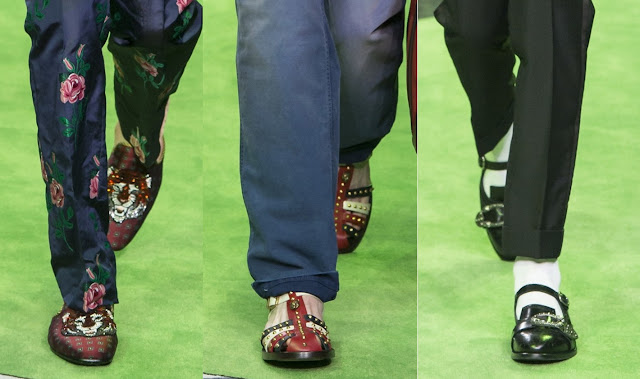