Kean Etro has been designing for his father's company for many years now and doing an absolutely glorious job of keeping the rich, sumptuous spirit of the house alive. The interest in classic paisley and other embellished patterns is always an important part of an Etro collection but this one seems particularly apropos. Fashion journalist Luke Leitch reports that Kean Etro has been obsessed by an unfinished French novel called MOUNT ANALOGUE by René Daumal which "charts an allegorical mountaineering expedition to enlightenment. Today, Kean equipped his models for that path, taking further inspiration from Reinhold Messner—the first man to climb all 14 8,000-meter-plus mountains—and his own in-built mysticism."

Kean himself said, "It’s about the sacredness of the mountains, mixing the idea of climbing and ascendere: ascent." Interesting that this is the second show of the season to riff on the idea of mountaineering (see the Moncler show Thom Browne mounted here).

The idea of Nepal and the Himalayas loomed large in this stunning Fall-Winter collection at Milano Moda Uomo. One of the reasons I appreciate the Etro aesthetic is that it is generally so Romantic, so sweeping, so lyrical. The show opened with etched velvet and velour suits featuring some gorgeous ethnic prints and patterns--all worn with some beautifully luxe hiking boots. Jackets were a combination of a Nepalese coat and the kind of toggled, quilted outerwear worn at Everest base camp. Indeed, some prints showed mountain ranges and snow-capped peaks. Kilts and delicious knits added texture.

The other part of this equation--the psychedelia--showed up in images of spirit animals, like bears or wolves with antlers. And it wouldn't have been a psychedelic reference without the appearance of Magic Mushrooms. The first look featured a pair of sunglasses that also covered the wearer's third eye. In fact, MOUNT ANALOGUE was one of the source materials for Alejandro Jodorowsky's cult film "The Holy Mountain" (previously here). It's exciting to think that Etro is using such heady, arcane material for inspiration.

In his novel, Daumal says:
"Alpinism is the art of climbing mountains by confronting the greatest dangers with the greatest prudence. Art is used here to mean the accomplishment of knowledge in action.

You cannot always stay on the summits. You have to come down again...

So what's the point? Only this: what is above knows what is below, what is below does not know what is above. While climbing, take note of all the difficulties along your path. During the descent, you will no longer see them, but you will know that they are there if you have observed carefully.

There is an art to finding your way in the lower regions by the memory of what you have seen when you were higher up. When you can no longer see, you can at least still know." 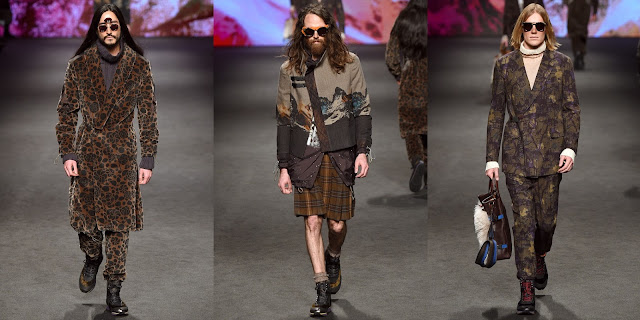 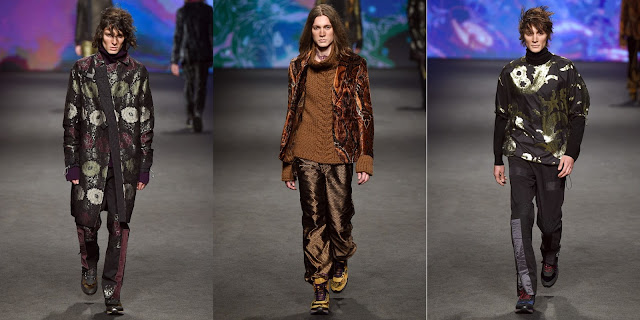 Oh dang. The woven (?) mountain scene moto-type jacket is my favorite but all these fabrics are so luxe and beautiful.

Hi Caroline! Haven't heard from you in a while--nice to see your comment. I know, I love that jacket too...and the velvet paisley CARGO PANTS! There are collections from some designers where a few or sometimes many pieces are nice, but I would cherish anything from this collection!