Thom Browne created an absolutely fascinating concept for his Fall-Winter '17-'18 show at Paris Fashion Week. Fashion journalist Luke Leitch was at the show and has an excellent description of a very conceptual presentation that was really more performance art than clothing.

"Thom Browne’s show was a three-piece suite on the suit (and its trappings), which aimed, via extreme distortion, to unpick, lay flat, then reveal as a thing of beauty the garment around which Browne has built his brand. The show’s set was 30 piles of thick gray felt—pattern offcuts—arranged in little shrine-like cairns under 30 workroom lamps.

To easily understand this show you have look at Look 1 against Look 16 and then Look 31. Or Look 2 against Look 17 and Look 32. And so on. Browne was building the same 15 suits (and variations of) in three ways.
The first 15 were arguably the freakiest. On mules (which resembled hooves), the models were cinched into bodysuits on which buttons delineated the outline of the garment Browne envisioned them as. This took a lot of buttons, and Browne’s press notes usefully transmitted exactly how many. So Look 15, my favorite simply for being the biggest and most extreme in its second part iteration, was comprised of 1,059 of these buttons, which were the stitches that linked and defined the outline of a double-breasted suit and a double-breasted greatcoat. Really, though, you had to stare pretty hard at the buttons—or read the notes—to get any of that detail for the first 15 looks. The chief impression was of a tentatively treading band of boardroom brothers locked forever in a John Cage–soundtracked endless commute, mitigated only by whatever would fit in that rolling suitcase—“Champagne!” Browne said—and the softening lenses of those blinkering helmet-masks.

Section two laid out the idea. Every look delineated in section one was represented in the flat sum of its parts from the pattern. These were worn half at the front, half at the back. By showing the suits and coats and even the shoes—which were uncobbled asunder—in two dimensions, Browne was leading us to consider their intricacies in three.

Section three put everything together, via button: Those looks were finally tailored into a more conventional whole. Of course, they were barely conventional at all. Hems zipped up and down more dramatically than the New York Times’ pre-election winner projector. Hot pants over leggings are simply not done, old boy. Yet, crazy as Browne’s interjections into the architectural niceties of suiting sometimes were, they still honored the spirit of them.

This collection so reminds me of Browne's FW '15-'16 collection, previously here, in which he showed Depression-era business men in threadbare suits dreaming of going back in time to more prosperous days. Each look came out in a set of three: completely worn out in the present, slightly worn in the immediate past, and pristine in the golden days of memory. There is something satisfying about seeing a concept unfold in threes this way. Past, present, future--yesterday, today, tomorrow--below, middle, above. In a strange way, it has the air of mysticism about it. 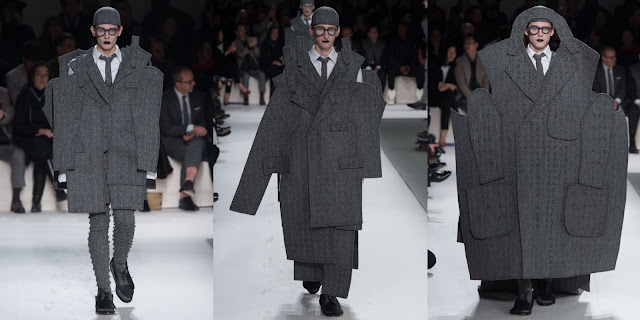