Kim Jones, former director of Louis Vuitton, has been at the helm of Dior Homme for a year now and things seem to be going quite well. His FW '19-'20 collection at Paris Fashion Week was a virtuosic display of tailoring and couture. Combining the two gendered sides of the house of Dior--the classic business uniform suit for men and the draping of haute couture dresses for women--Jones seemed to break new ground in terms of structured yet elegantly flowing clothing for men.

Models stood stock-still like statues on a moving walkway as they glided by the audience. The suiting options included a marvelous detail: a long, trailing piece of fabric coming from inside a jacket at the lapel that can wrap around the torso like a cummerbund, or over the shoulder like a scarf while the excess wraps around the whole body to drape effortlessly from an arm or the other shoulder. Jones said, "That idea came from looking at the cut of a 1955 dress in the Dior archive. But I wanted it to have ease and elegance." Jones went even a bit farther back in France, before Dior, and took inspiration from the statues of French heroes and statesmen one sees around Paris ("I noticed how many of them are wearing armor," Jones said) by creating another detail: the vests and chest pieces seen below, some beaded with an indistinct animal face while others look like cargo vests, some are in zebra and panther, and still others look like flak jackets. Taffeta suits with contrasting side panels rounded out this amazing collection that feels smart and tight while simultaneously being unconstrained and elegant. 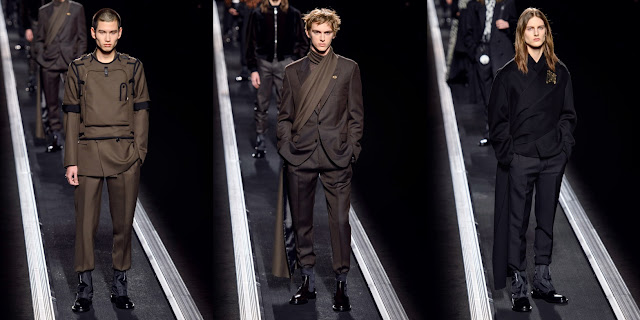 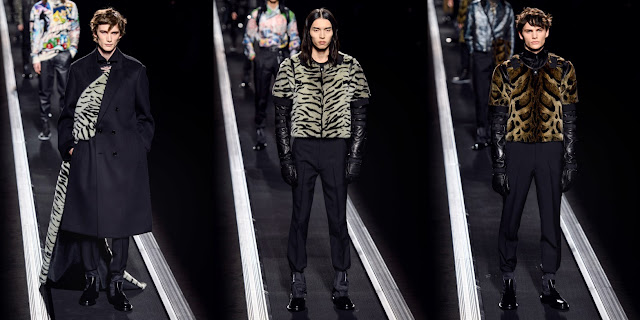